County Board to vote March 3 on plan that includes 1,000 new residences and 193,000 square feet of retail and office space. 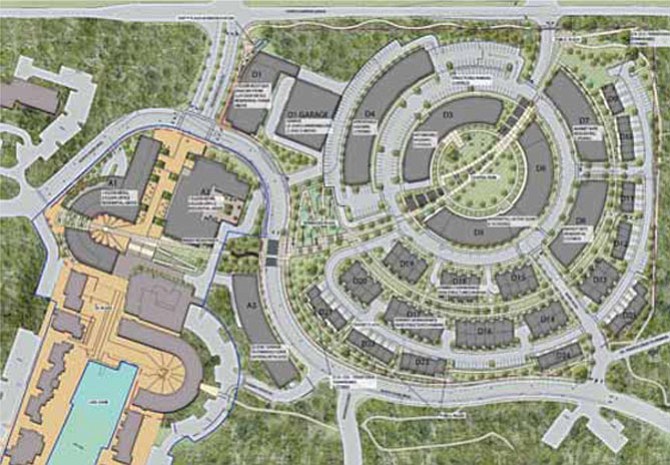 An aerial view of the overall development plan at Lake Anne, set for approval at the Board of Supervisors on March 3. Source: Lake Anne Development Partners

Ana Carranza, a single mother of two daughters, told Fairfax County’s Board of Supervisors Tuesday, Feb. 17 what the Crescent Apartments has meant to her family and to her neighbors.

One of Carranza’s neighbors earns $32,000 a year and still manages to pay for her son’s college tuition, some semesters with a credit card, she said.

Carranza and her two daughters have also made numerous sacrifices to achieve their goals. One daughter is a sophomore Engineering student at Catholic University who brought home another certificate from the Dean last month, she said.

“You cannot imagine how proud I am,” Carranza said. “What do our Crescent families want? To get an education for their children and to continue living in a safe, stable and welcoming neighborhood and community,” she said.

She wanted the Board of Supervisors to know she hopes that plans to revitalize Lake Anne don’t disrupt her home.

Julie Wallick moved to Reston eight years ago. “I am passionate about Reston, and the housing it affords all of its residents,” she said.

Kathryn Laskey is a 28 year resident of Reston. “I moved to Reston because I believe in the Reston vision, where people from all walks of life and income levels live and work together in a vibrant community,” she said.

John Lovaas enjoys working at the Farmers Market. He wanted to make sure the revitalization of Lake Anne Village continues to connect the people of Reston.

“For the better part of 12 years I’ve been a critic of prior plans and processes that would have failed to unify the neighborhood, to keep Lake Anne’s village charm,” he said.

“I’m very pleased to be here today for this discussion on this extraordinary plan for my neighborhood. It’s been a long time coming.”

Despite snow that cancelled all local school systems and the Federal government, seven people testified before Fairfax County Board of Supervisors on the redevelopment and revitalization of Lake Anne, in addition to County planners and architects of the plan.

The proposal includes more than 1,000 new residences and 193,000 square feet of retail and office space. There will be 185 new affordable apartments in two five-story buildings to replace the 181 existing affordable units at the Crescent Apartments.

“The testimony warms my heart today, because I think all the conversation we heard was positive,” said Hunter Mill Supervisor Cathy Hudgins.

Lake Anne has always been a community of diversity, she said.

The Fairfax County Planning Commission recommended approval of the project on Jan 22. The Board of Supervisors will vote on the redevelopment proposal at its regularly scheduled meeting on March 3.

“Lake Anne is still taught today as a case study at almost every American architecture and urban-design program,” said Michael E. Hickok, architect of the redevelopment proposal. “To say it was ahead of its time is an understatement.”

Hickok wanted to design a plan that fulfilled “the spirit and image of Robert E. Simon’s vision of 50 years ago,” and stands for the next 50 years.