Yes, Cats Can Be Trained Too
Votes 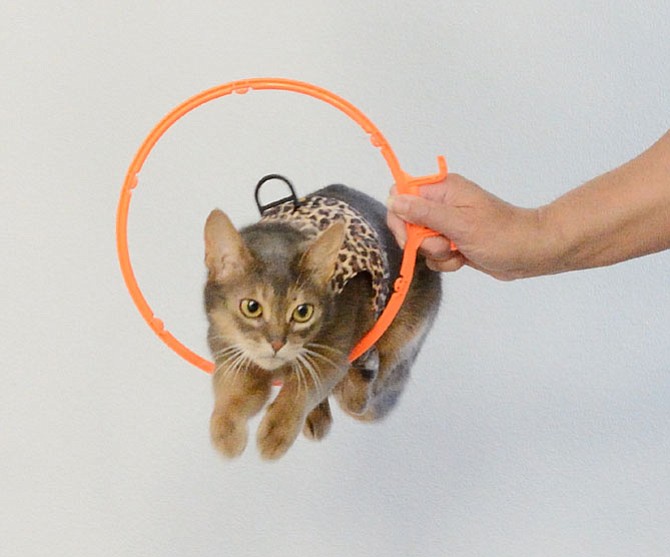 Eye on the prize: A favorite treat can be a strong motivator in training a cat to a wide range of behaviors and tricks. Contributed by Robert Hodgin/The Connection 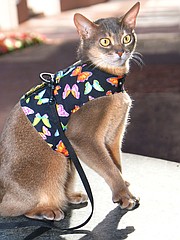 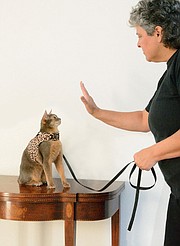 Cat training sessions should be kept short, and start with basic behaviors, such as the "sit and stay" command. Pictured are Lisa-Maria Padilla of Reston with Racy Mooner.

Padilla, who has been showing her performance cats for 15 years all over the country, is an expert cat trainer who dispells the secrets to training cats. And like dogs, cats can be trained to do tricks, or behaviors.

Padilla says it's easier to start when a cat is a kitten, but older cats can be trained too. "Usually the problem is we humans don't have enough patience," she said.

The most important training mechanism for cats is to use treats, she said. And one of the biggest mistakes pet owners have is "free feeding," where people leave a bowl of food out all day for the cats to go back and forth at their will. She said it discourages cats from being motivated by treats because they're not going to be hungry. "You want the cat to be hungry and ready for a treat," she said.

She said the easiest thing to teach a cat is to sit and stay. "And that can be the basis of establishing if you're going to have a training period with your cat," she said.

The training consists of sitting your cat down close to you and putting your hand in front of its face, saying the cat's name and "stay," then immediately giving it a treat. "And you increase the period of time the cat needs to sit still," she said. Just gently keep the cat still as you say "stay."

She said it’s important to keep the training sessions short -- no more than two minutes twice a day. "You don't want to discourage the cat and wear them out in terms of their attention span," she warns. "And it's important to end on a high note."

Some trainers use clicker training but Padilla uses voice and hand commands. They work under the same principle of awarding a behavior based on a positive -- based on a key word or sound that a cat knows and clicks in his mind that that is the desired behavior.

"I always tell people to keep their voice commands short and use a high voice," she said. "Cats respond to higher pitched sounds and they respond to those more positively. Cats are sensitive to a higher tone."

FOR TREATS, Padilla uses Whole Life Freeze Dried Chicken Treats, a nice protein snack. "We call it 'Kitty crack' and they're very responsive to it. To get a cat to roll over, she holds the treat over the cat's head, makes sure the cat is looking at the treat, and with her free hand, will reach down and gently roll the cat over as she's moving the treat over the cat's head. "And I would say the key word, "roll over," and as I do it, I'm having the cat watch the treat and roll over." She adds: "You do it a few more times and see that the cat is struggling less and rolling over more."

For the learning curve, she said all cats are different. In some cats it may take two or three training sessions; in others, it may take a few weeks. "Consistency is very important," she said. "If you're going to do two training sessions a day, maintain consecutive days that you're doing it." She said it will get to the point where all you have to do is touch the cat and it will begin rolling over on its own. "Then one day, it clicks in the cat's mind, and it will roll over on its own when the treat comes out. And you reinforce that when the cat thinks it will get a treat; it will do auto-rollovers. "But I don't reward those; I only reward when I say 'roll over.'"

Padilla said one of the most important behaviors that owners can teach is for cats to walk on a leash because that leads to pet safety. Having a cat who is used to a harness makes it much easier to travel more safely.

"I travel all over the U.S. demonstrating that cats can be trained, not just to perform tricks, but also to walk on a leash successfully," she said. "It's good for safety purposes; it enriches their lives, both the owner and animal to be able to go traveling and walking and enjoying the outside together."

She said training a cat to a leash is easy if you remember to be patient. "Introduce the walking vest as a friend to the cat. I put the walking vest in their bed -- to have the cat's smell on the walking vest so that it smells like a part of the family," she said. "You get your treats out and hold the treat far enough away from the cat; the whole idea is to get the cat comfortable and know that he can move when he has the walking vest on...we need the cat to rediscover that he has legs."

EACH TIME with that training session, the owner moves the treat further away, so the cat needs to move further to get the treat, she said. "Once I introduce the walking vest to the cat, I feed the cat meals while he's wearing the walking vest -- to connote a positive experience when he's wearing it. And very quickly the cat can get used to wearing the vest. They're playing in it; it becomes a family experience and something that cat is comfortable wearing." She said the cat will feel comfortable and when it's time to attach the leash, the owner can start working with the cat to walk on the leash.

While showing her cats at cat shows, Padilla gets them to jump through hoops; jump from the floor to her shoulder; walk out on the end of her arm to retrieve a treat, and then walk to the other arm. "A cat can be trained to stay, look left or right, or any number of behaviors."

For the agility courses, which is a more directed, organized play, she said they utilize the cat's desire to run and chase prey. "That's why we use a lure with a toy on the end of it. And kittens are very easy to train for agility courses; they love to play."

Padilla's cat Twyla Mooner, a 10-year-old blue Abyssinian, was the first national feline agility champion, whose best record was seven seconds in a San Diego Cat Show. Twyla, who loves to play and has a great deal of energy, still enjoys going through an agility course.

Padilla said you can make your own agility courses at home using your imagination to create items for weave poles, setting up bottles that the cat needs to weave around; or making steeples that a cat can jump over using stacks of books.

"Introducing a cat to agility competition is a time for the owner and cat to have some organized play together," she said. "That can be a nice way for the cat to expend some energy and have some time together with the owner; it's mentally and physically stimulating to the cat."