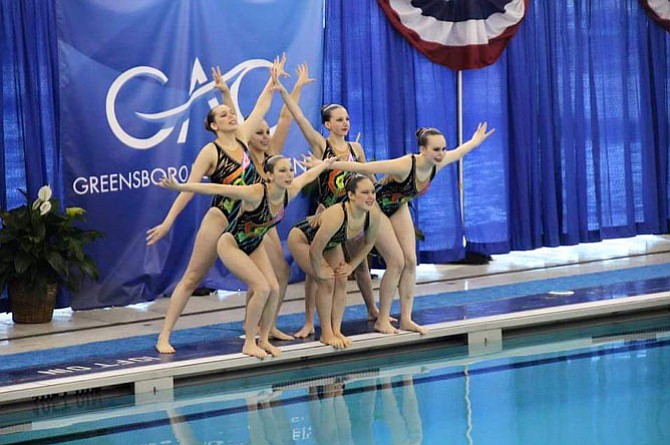 Lake Braddock graduate and Springfield resident Connie Polnow has been doing synchronized swimming since she was 9 years old. Her teammate and rising West Springfield freshman Angie Borkowski has only been at it for a year. But together, they were among 29 members of the Northern Virginia Nereids squad who participated in the United States Synchronized Swimming Junior Olympics between June 29 and July 4.

The meet in Greensboro, N.C. drew around 450 swimmers who competed in individual, duet and team events. For the Nereids, the meet was the culmination of training that started back in September.

“They all had their best swims of the year during the competition,” said co-head coach and Washington, D.C. resident Julie Silverman. “I couldn’t be more proud of that.” Last year, she added, the Nereids sent just nine swimmers to the championship meet.

Because it included teams from outside their normal area of competition (practices are held at Audrey Moore RECenter at Wakefield Park in Annandale) Silverman said the meet offered swimmers a chance to “see what else is out there” in terms of practice styles and water performance elements like “lifts” (swimmers bringing other swimmers out of the water) and “ripples” (when one person follows the action of another rather than moving simultaneously).

“It was definitely an exciting experience for them,” she said.

Borkowski’s team of seven young women between ages 13 and 15 performed a routine using World Cup-themed music for the soundtrack to match the “upbeat arms” and “really exciting and happy” choreography. The teammates custom-decorated their suits with international flags and soccer balls.

She likes synchronized swimming because “it’s artistic and works on my endurance,” she said.

Borkowski swam for the Daventry Dolphins community summer league team for several years before seeing an ad in the Fairfax County Park Authority magazine “Parktakes.” “It looked really different -- I never did anything like it before,” she said.

Connie Polnow was also a lap swimmer before switching to synchro. She remembers being at a practice at Audrey Moore and seeing the Nereids running their practice at the same time in the pool’s deep end.

“That seemed more appealing to me,” Polnow said. She talked to the coaches that day, got into a short summer program and joined the team in earnest the following fall.

Polnow likes synchro for “the people, first and foremost,” she said. “I also like the sparkly suits.”

With the difficulty of controlling your body and breath for several minutes through numerous maneuvers and positions, the sport isn’t exactly mainstream, which is something Polnow appreciates. “And there’s always something new to learn; not just honing a skill, but always something new you can do.”

In Polnow’s Junior Olympics routine, she was joined by five other swimmers in the ages 18 to 19 group. They chose music from “Willy Wonka and the Chocolate Factory” featuring Johnny Depp to accompany approximately four minutes of tricky choreography (five lifts and nearly half of the time under water). “We wanted our routine to be fun for the audience, to be upbeat.”

This is how the full contingent from the Northern Virginia Nereids fared at the United States Synchronized Swimming Junior Olympics: