State of the County Address, supervisors’ questions and an award ceremony top the agenda. 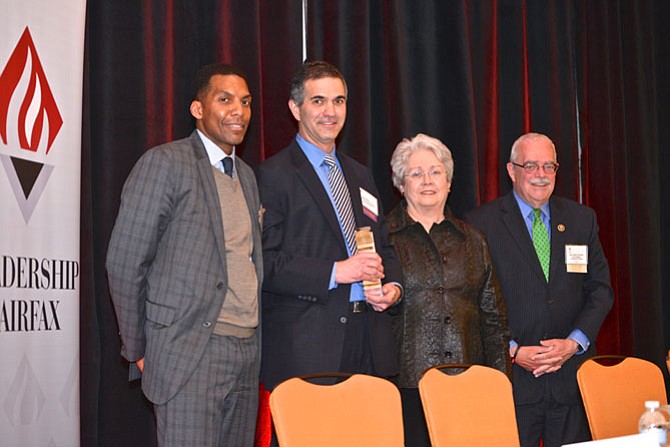 The agenda and the speakers have to be of significant interest to get some 300 people to brave local traffic and attend a meeting that started at 7:30 a.m. Leadership Fairfax (LFI) apparently succeeded in offering both in the ballroom of the Fairview Park Marriott on Friday morning, March 13, hosting its 24th Annual Board of Supervisors Breakfast. This was a chance to hear in person the State of the County from Sharon Bulova, chairman of the Board of Supervisors, and to participate in an “Ask the Supervisor Questions” forum with all but one member of the board in attendance.

Sharon Bulova’s bullet points for memorable events and achievements for the county in 2014 included:

Before the supervisors took to the dais, there were the welcoming addresses and remarks of gratitude to supporters like Presenting Sponsor TD Bank and Coffee Sponsor Atlantic Realty Companies by LFI President and CEO Elizabeth Murphy. There was also a ceremony to honor Dean Klein, recipient of the 2015 Katherine K. Hanley Public Service Award. Now in its 12th year, the award recognizes sustained contributions by public-sector employees, nonprofits, or appointees to a public board, authority or commission and is intended to honor outstanding accomplishments and lasting contributions to the quality of life in the community.

Rodney Lusk, chair of the award Selection Committee, called the choice of Klein as the award winner a unanimous one, noting that since Klein’s 2009 appointment to director of the Fairfax County Office to Prevent and End Homelessness, Fairfax County is now seen as a national leader in this effort. “Dean has spearheaded a 33 percent decrease in the number of homeless in the county,” cited Lusk, “and a 288 percent increase in moving people out of emergency shelter and into permanent housing.”

THE NAMESAKE OF THE AWARD and a former chairman of the Fairfax County Board of Supervisors, Katherine Hanley, was next to praise Klein. She began by reading his lengthy job description. “I think the only more daunting positions one could hold would be Director to Achieve World Peace, or End Traffic Jams on I-66, but I am happy to say he’s successful — and really good at it.”

The final presenter was U.S. Rep. Gerry Connolly (D-11), who said that Klein was a true leader in his position because he brought a “clear sense of the mission, a passion for the work, and metrics — the ability to measure our efforts.” Klein then accepted his award, saying he was humbled by the honor. Likening his acceptance to the Oscars — “There are too many people to thank in too short a time” — Klein did single out Connolly “for his belief that we can end homelessness in Fairfax County,” Elizabeth Murphy, the President and CEO of Leadership Fairfax, “for bringing this group together,” and “all of the individuals, our nonprofits, our partner businesses and our faith community who all work together.”

After the award presentation, LFI Class of ‘99 graduate Casey Veatch took control of the proceedings, introducing the Board of Supervisors, and acting as moderator. Veatch informed the audience that the supervisors had been given a “homework assignment” to present an inspirational quote and explain their choice. The answers were varied. Retiring Supervisor Michael Frey (R-Sully District) chose words from “that great American philosopher, Garth Brooks.” Also retiring, Supervisor Gerry Hyland (D-Mount Vernon) went for the more traditional with the famous “Ask not what your country can do for you,” quote from President John F. Kennedy. Supervisor John Cook (R-Braddock) echoed the sentiments of Clint Eastwood’s 1970’s Dirty Harry character, “A man’s gotta know his limitations.” “Getting out in the community helps us know our limitations and stay grounded,” said Cook. Bulova said the past year had given her opportunities to make use of her quote: “Never let a good crisis go to waste.” At the conclusion of Bulova’s summary, moderator Veatch then began asking “the tough questions.”

Supervisor John Foust (D-Dranesville) was asked to speak about the board’s recent adoption of a Strategic Economic Success Plan. “There are several parts to the plan, but basically, we need to come up with ways to diversify our economy, rather than relying so heavily on Federal Government business. We need to review our systems and procedures to make them more business friendly and create spaces where people want to be.”

Supervisor Pat Herrity (R-Springfield) responded to a related question. “To fuel our growth, we need to leverage our resources, what’s working well for us now. We need to develop and support centers of research. We need to work on our zoning and permitting and find a way for our people to say ‘yes.’ And we need to keep Dulles Airport strong.”

Cook called for increased technical and skills training in our school systems. “We need to better connect the education with the job with the student. And that may sometimes be outside the traditional 4 year degree.”

THE SO-CALLED “DAILY DOUBLES” were next on the questions agenda, and Veatch called on two supervisors to offer the pros and cons for each of several controversial topics.

On adding a Meals Tax in Fairfax County, Foust gave the opposing viewpoint stating that the public was against the additional tax and that it would hurt the local restaurant business. Hyland disagreed, citing similar taxes in Alexandria that have not harmed competition there. “We can’t keep hitting the real estate stream for our revenue. We need to diversify,” he insisted.

Bulova and Frey were handed the topic of the new Ad Hoc Police Practices Review Commission. “We can’t rest on our laurels,” said Bulova, “even though we are one of the safest jurisdictions for our size in the nation.” Bulova contends that the commission can enhance and improve the police department and its relationship with the community. Frey’s response was that the charge of the commission is too broad to be effective, and that its workings could be “wrapped up in elections.”

Frey was immediately handed another hot potato; for or against the recent vote to increase the salaries of the board’s members. “I have always supported higher compensation for the board. We are a $7 billion company with 11,000 employees. Our constituents rightly expect to see us at events on weekends and at night. The time has long since passed that we could be considered part-timers,” he said. “And we need to be able to attract from the best to encourage competition for each seat.” Supervisor Linda Smyth (D-Providence) voted against the proposed salary increase. “We are in tight financial times, facing cuts today, and projected harder times and cuts in 2017. In most cases we haven’t been able to support 6 percent salary increases in total for the last several years for our employees. How can we justify an increase like this for ourselves?”

And the final “Daily Double:” Who should control local roads: The county or the state? “In 47 out of 50 states, local government controls local roads. We are better equipped to be more responsive,” said Cook. “We certainly get all the complaints,” he added. Cook warned, however, that taking control of roads would require a funding mechanism, or the consequences could be disastrous. For the opposition, Supervisor Penny Gross (D-Mason) noted that the start-up costs could be astronomical and that the liability issues were of great concern. “There’s no proof available that local control would really improve the situation,” she said, “and I am fairly certain that local taxes would have to go up significantly to cover the costs.”

Leadership Fairfax (LFI) is a nonprofit organization founded in 1987 by the Fairfax County Chamber of Commerce whose goal “is to build a base of understanding about our community, educate and inform and to ultimately engage individuals to become agents of positive change in Fairfax County and the Northern Virginia region.” LFI sponsors three programs, LFI Signature Program, The Emerging Leaders Institute, and the Lifetime Leadership Program for individuals who have recently retired or are preparing to retire, with a vision to “create community trustees.” The LFI class year begins in September. For more information about Leadership Fairfax and the programs and services on offer, check its website at www.leadershipfairfax.org.