Alexandria native Humbert “Rocky” Versace was a Vietnam prisoner of war for nearly two years before being executed by his captors in 1965. Posthumously awarded the Medal of Honor in 2002, Versace’s name, along with 66 other Alexandrians, is inscribed on the Vietnam Veterans Memorial in Washington. -(Photo by Mike Lang/Sarasota Herald-Tribune) merlin

The Captain Rocky Versace Plaza and Vietnam Veterans’ Memorial, located in front of the Mount Vernon Recreation Center, was made possible through the efforts of the Friends of Rocky Versace Memorial Association and dedicated just days before Versace was posthumously awarded the Medal of Honor for his heroics in July of 2002. 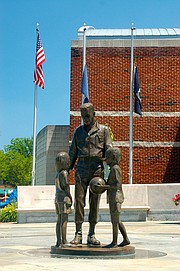 The Captain Rocky Versace Plaza and Vietnam Veterans' Memorial in Del Ray honors the 67 men from Alexandria who either died or remain missing in action in Vietnam. A Memorial Day ceremony will be held May 25 at the Rocky Versace Plaza on Commonwealth Ave. beginning at 11 a.m.

The organization, which will be holding its traditional Memorial Day wreath-laying ceremony on May 25, is now spearheading efforts to help the Vietnam Veterans Memorial Fund put a face with each of the 58,300 names on “The Wall” and is seeking help in locating photos of 20 Alexandria veterans.

“We’ve come a long way in obtaining photos since the dedication of the Versace Plaza in July, 2002,” said Mike Faber, founder and chief organizer of the Friends of Rocky Versace. “But we seem to have come to a dead end trying to locate these last 20 pictures.”

Photos are being sought for the 20 Alexandria Vietnam veterans listed below:

To date, VVMF has collected more than 38,000 photos but more than 20,000 are still missing. A photo of U.S. Army Warrant Officer Raymond Conway was recently located but 20 Alexandrians are still unaccounted for in the database. That number is nearly one-third of the 67 men whose names are chiseled into stone at the city’s own Vietnam Memorial.

The Friends of Rocky Versace are asking people to search through yearbooks, family photo albums and newspapers to help find photos of these men.

The photos of the fallen will appear online at VVMF’s Wall of Faces (www.vvmf.org/wall-of-faces) as well as on permanent display at the future Education Center at The Wall.

“We’re calling upon everyone to help us remember the service and sacrifice of those in their communities,” said VVMF founder and president Jan Scruggs. “Sometimes there are no living relatives. We’re asking people to do a little detective work. We can’t let these service members and their sacrifice be forgotten.”

Photos can be uploaded directly to VVMF’s website or via mail. For details on how to submit a photo, visit www.vvmf.org/how-to-submit.

The Friends of Rocky Versace Memorial Day ceremony will include the recitation of the names of Alexandria’s 67 Vietnam War fallen heroes, the reading of Versace’s Medal of Honor citation and a wreath-laying by Versace’s West Point 1959 classmates. For more information, email FoRV59@gmail.com.