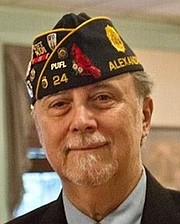 While we set aside Nov. 11 as a special day to honor and remember our veterans, we should continuously endeavor to serve our veterans as well as they have served their nation.

The American Legion shows its support through numerous programs such as the Family Support Network, Temporary Financial Assistance, the National Emergency Fund and Operation Comfort Warriors, just to name a few.

Sometimes all that is needed is a simple “thank you” directed at the veteran or the family member for his or her sacrifice.

Part of that sacrifice too often includes unemployment or underemployment when the veteran’s military service is over. Companies should understand that it’s smart business to hire veterans, and when members of the Guard and Reserves deploy, it is America’s business to ensure that their civilian careers do not suffer.

We must not forget the unique needs of women veterans. There are more than 1.8 million women in America today who have worn the uniform. Women are major contributors to our military readiness and many have given their lives in the Global War on Terrorism. The Veterans Administration must adequately treat breast and cervical cancer as well as trauma that may have resulted from domestic violence, sexual harassment and assault.

While fewer than 10 percent of Americans can claim the honorable title “U.S. military veteran,” this special group often provides the vital services that enable our communities to function.

Chances are that if you surveyed your local police or fire department, you would find that a disproportionately high percentage of its members are veterans. When an emergency hits, there is a good chance that it is a veteran that is first to respond.

Whether it’s a schoolteacher, construction worker or first responder, military veterans take their missions seriously. They vote in higher percentages than nonveterans, they are more likely to volunteer in their communities and they are less likely to live in poverty. In short, veterans make our communities better.

Nearly a century has passed since the American Legion’s founders made their commitment to serve veterans, troops and families in their communities, states and nation. American Legion members have never retreated from that commitment. If you are a veteran and not a member of The American Legion, why not? Join us to ensure that the promises made to us for defending our country are kept.

God bless all our veterans and God bless America.