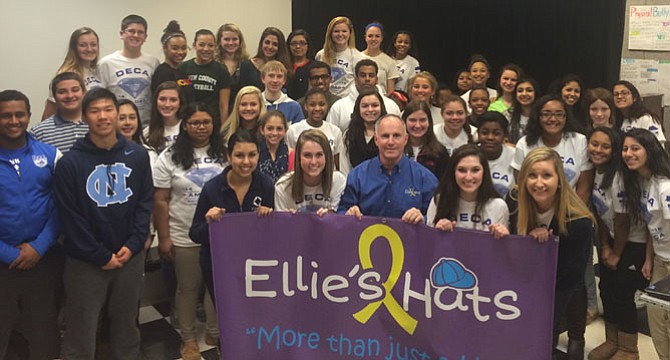 When the school year began in 2013, Jay Coakley, a physical education teacher at Woodburn Elementary School in Falls Church noticed that one of his kindergarten students had an affinity for brightly colored hats. 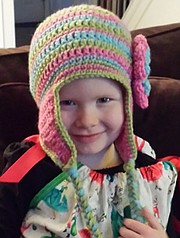 Seven-year-old Ellie Whitfield, who was diagnosed with acute lymphoblastic leukemia in the spring of 2013, is the inspiration behind Ellie’s Hats.

“She had no hair so she would wear different hats every day,” said Coakley, who is in his 33rd year of teaching.

Ellie was diagnosed with acute lymphoblastic leukemia a few months before school started and lost her hair as a result of the treatments.

As the holiday season approached that year, Coakley decided to purchase hats for Ellie, but that effort grew. “My wife and I thought, ‘Why don’t we get enough hats for all the kids at her clinic where she receives her treatments?’” he said. “We ended up with 140 hats, which were handed out at a Christmas party for the children” at Inova Fairfax Cancer Center.

Coakley used social media to let others know about his effort to collect hats for children with cancer and formed an organization called Ellie’s Hats, named after his student. It’s now an international collection effort, and hats are distributed to children not only in northern Virginia, but across the country. The effort is so large, that it’s often no longer possible to personally connect the hat donor and the patient.

“Ellie represents all the children with cancer,” he said. “When you hear from the family that you’ve brightened a kid's day, you just want to do more and you wish you could do more.”

“Distributing hats “brings a lot of joy to a lot of children,” said Jennica Whitfield, Ellie’s mother. “It allows people outside of the cancer community to be connected to a bigger vision of what is going on. It gives people a way to help, but brings education with it. The simple task of collecting hats brings awareness about childhood cancer.”

A knitting and crocheting group known as the Flying Fingers displays their creations for Ellie’s Hats.

Ellie finished her cancer treatments in August, but has monthly blood tests. Whitfield says that Ellie’s prognosis is good. “She should be healthy other than normal long-term side effects.”

THE EFFORT has even touched other children and young adults. In Lorton, South County High School DECA (formerly known as Distributive Education Clubs of America), an international association of marketing students, chose Ellie’s Hats drive as the beneficiary of their 2015 community service project.

Senior Nissma Bencheikh, who is the president of the school’s chapter, lead the committee that collected hats at varsity baseball game. “We made signs and encouraged students to attend the game and bring a hat with them. Overall, the game was a success and we received many donations from those attending.”

Other efforts included a school-wide hat drive. Students could either bring in new hats or purchase one for $5.

Teachers say the lessons the students learned from the effort were life-altering. “I think that what they got out of the project is that you can use effective marketing to help make a change in the world,” said Pearl Springfield, marketing teacher-coordinator, DECA advisor. “They knew that their own personal actions would help a child who is fighting cancer.

“I had one of my students who went out of her way and kept coming in with donations of hats,” Springfield added. “Whenever she would drop her donations off you could see her beaming. You could that she was getting joy from the difference that she was making.”

Earlier this month, a member of the South County varsity football team spearheaded an effort to get his teammates to show support for Childhood Cancer Awareness month by wearing gold ribbon stickers on their helmets during a game. A gold ribbon is the symbol used to raise awareness of the disease.

“The student spoke personally to Jay about this and … at [a recent] game, the helmets display[ed] support of the fight against childhood cancer,” said Springfield.

A knitting and crocheting group of seniors citizens, known as the Flying Fingers, also created hats for the cause. The club, which is based at Westminster at Lake Ridge meets once per week.

“To see ladies in their 80s and 90s doing these hats is so inspiring,” said Nancy Ryback, an Ellie’s Hats volunteer and the daughter of one of the women. “The effort proves what one person can do to inspire others. You spread the word and people say, ‘What can we do?’ or ‘How can we help?’”

Coakley says one of the greatest rewards is increasing awareness and educating others about childhood cancer. Earlier this month, the Fairfax County Board of Supervisors and the Fairfax County School Board recognized September as Childhood Cancer Awareness Month.

For More Information or to Donate

“This September there are a number of high schools that are having go gold days to recognize childhood cancer awareness month,” he said. “In October, we’re going to be sending out packages of hats to over 200 children throughout the country.”