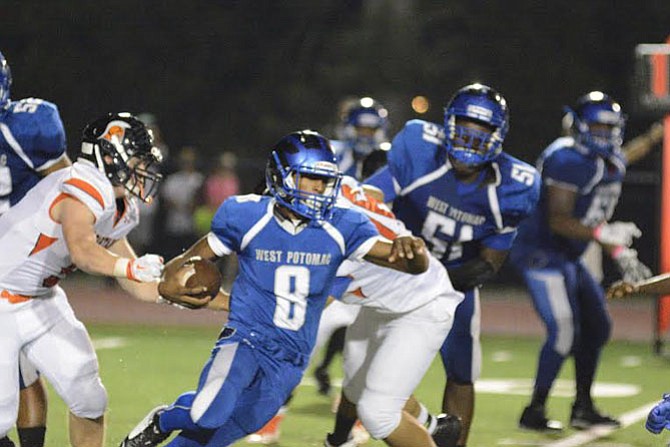 Cleveland produced season highs for carries (23), yards (143) and touchdowns as West Potomac improved to 5-2, including 2-2 in Conference 7. Cleveland now has 91 carries for 528 yards and 10 touchdowns for the season.

Justine Annan carried 19 times for 93 yards and a touchdown against Annandale. Quarterback Mark Ellis completed 15 of 27 passes for 204 yards and two scores. He was intercepted once.

CJ Burch had five receptions for 73 yards and a touchdown. Khalil Williams Diggins caught two passes for 75 yards and a score.

West Potomac is tied for No. 8 in the latest VHSL 6A North region power rankings. The top 16 teams make the playoffs.

The Majors are No. 21 in the latest VHSL 6A North region power rankings. The top 16 teams make the playoffs.

Mount Vernon will return to action at 7 p.m. on Friday, Oct. 23 with a road game against Woodson.

The No. 5 seed West Potomac field hockey team earned a berth in the 6A North region tournament by defeating No. 4 West Springfield 2-0 on Tuesday in the opening round of the Conference 7 tournament at WSHS.

The Wolverines will travel to face No. 1 T.C. Williams in the conference semifinals at 7 p.m. on Thursday, Oct. 22 at T.C. Williams High School’s Minnie Howard Campus.