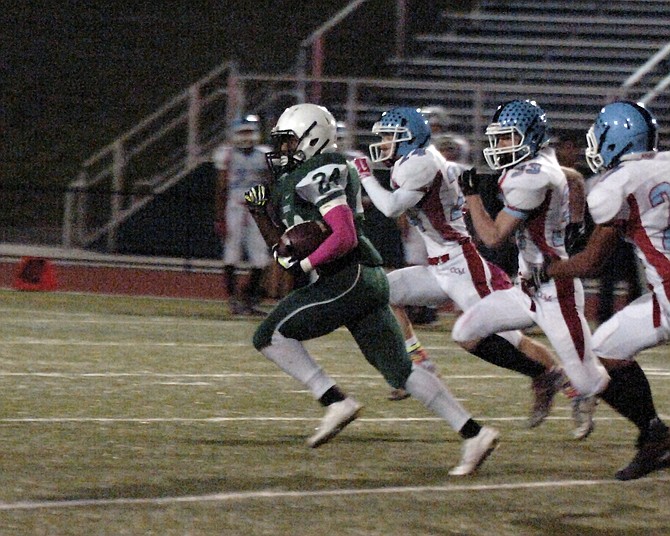 Wakefield running back Leon Young totaled 279 yards of offense and scored four touchdowns during the Warriors' 33-19 win over Marshall on Friday. Photo by Craig Sterbutzel.

As members of the Wakefield and Marshall football teams passed one another in the postgame handshake line, Wakefield senior running back Leon Young offered words of encouragement to the opposing Statesmen.

“They fight hard every single play,” Young said. “That’s what I told all of the guys during the handshake: 'It’s going to get rough. Just keep your heads up and keep on pushing and things will turn around for you.'"

On Friday night in Arlington, Wakefield-versus-Marshall was a matchup of a perennial loser-turned-playoff team and a long-time doormat on the rise. While Marshall might one day reach Wakefield’s level of improvement, there were still elements separating the two teams.

Mainly, Young plays for the Warriors.

Young amassed 279 yards of offense and scored four touchdowns, leading Wakefield to a 33-19 victory over Marshall at Wakefield High School. The Warriors extended their win streak to six games and took over sole possession of first place in Conference 13 after each team entered Friday’s contest with a 3-0 conference record.

In 2014, just his second season as Wakefield head coach, Hogwood led a program with 30 consecutive non-winning seasons to its best record since 1972. The Warriors finished 8-4 and earned the first playoff victory in program history. This season, the Warriors dropped their first two games but entered Friday having won five straight.

In the five seasons before Masten took over as Marshall head coach in 2014, the Statesmen compiled a record of 4-46, including back-to-back winless seasons in 2012 and 2013. Marshall finished 2-8 in Masten’s first year, but is much improved this season, entering Friday’s game with a 4-3 record.

Marshall has not had a winning season since 2007.

Masten has helped point Marshall in the right direction, but the Statesmen played Friday’s second half without their head coach, who was ejected with 4:01 remaining in the second quarter after arguing with an official.

While Marshall has struggled in recent seasons, Hogwood said the Warriors did not take the Statesmen lightly.

“We knew,” Hogwood said. “We talked about it last year. We saw this program that Marshall has developing last year. They do things the right way, their lower levels are good and they’ve got a couple kids that our kids know. The … quarterback (Markel Harrison) is a great athlete. The fullback (Joshua Hurlburt) … is one of the toughest kids we’ve ever played against. We didn’t sleep on them at all. We knew this was going to be one of the toughest games of the year and I think that helped us and we practiced that way this week.”

Marshall junior Elijah Weske returned the second-half kickoff 74 yards for a touchdown, giving the Statesmen a 16-13 lead early in the third quarter. Wakefield didn’t panic, however, regaining the lead on its following possession. The Warriors used 7 minutes, 2 seconds to march 90 yards in 11 plays, taking a 20-16 lead on a 5-yard touchdown pass from sophomore quarterback Colton Poythress to Young.

A roughing the punter penalty against Marshall kept the drive alive.

Wakefield extended the lead to 26-16 on its next drive, when Poythress connected with Young for a 63-yard touchdown with 10:32 remaining in the fourth quarter.

“He can do everything,” Hogwood said. “He can catch, he can throw --- although we don’t want him to --- he can run and he wants the ball. In a game situation like this, he’ll come over, all I’ve got to do is ask him which way he wants to go.”

Marshall running back Jelani Murray produced the Statesmen's lone offensive touchdown against Wakefield on Friday, scoring on a 40-yard run.

It was the second straight week Young scored four touchdowns in a game. He ran for 208 yards and four scores during a 49-0 win against Stuart on Oct. 16.

“He’s doing what I’ve been expecting him to do, to be honest with you,” Hogwood said. “He’s been my guy since he was a sophomore. I came in, he came up from the freshman [team], that offensive line came up, we played all of those guys as sophomores and they took their lumps and they didn’t quit on us. They kept learning, they kept listening, they kept taking the criticism we were giving them and they’ve gotten better every year and every game and this is where we expected them to be.”

Young and Hogwood each praised the Wakefield offensive line.

Poythress, who took over as Wakefield’s starting quarterback after the team lost its first two games, also had a big night for the Warriors, completing 8 of 10 passes for 127 yards and three touchdowns. His 24-yard touchdown pass to Chris Robertson gave Wakefield a 33-16 lead with 7:12 remaining in the fourth quarter.

“We still are looking for him to mature a little bit more and get a little bit more confident in himself,” Hogwood said about sophomore Poythress, “but he’s done … the most important thing, I think, as a quarterback --- he doesn’t make mistakes.”

Marshall quarterback Harrison completed 8 of 15 passes for 93 yards, and was intercepted once. Running back Jelani Murray carried five times for 63 yards and a touchdown, and Hurlburt carried 14 times for 46 yards.

Marshall kicker Robert Guenther made field goals of 29 and 36 yards.

“We came to play,” Masten said. “I don’t think we have the [same amount of] size as people that we play across the board. I think we play extremely hard up front for the guys we have. I think we played really hard, so I’m very proud of my guys.”