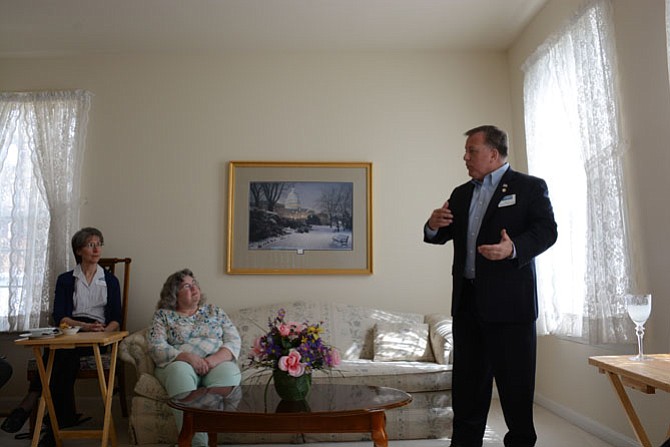 Beth Schaefer, a resident of the Franconia area of Alexandria, and Susan Valentine of the Kingstowne area of Alexandria, listen as Virginia Senate candidate and Dumfries Mayor Jerry Foreman outlined some of his campaign objectives. A meet and greet event took place in Valentine’s home. Photo by Tim Peterson.

“I’ve found him to be very effective, with solid values to cut taxes and improve the environment for business. I think he’s done that for the most part.

He makes himself very accessible and is just a good manager. Leaders, people just naturally want to follow. Put 10 people in a room with things to do, leaders just stand out. He’s just one of those people I identify with. People enjoy working for him.

He always seems to be prepared for whatever it is we’re doing. In a meeting, he’s definitely extremely familiar not just with the agenda, but has reached down into all of the agenda items, understands what it is we’re talking about.”

“He’s a great mayor, probably the greatest mayor Dumfries has ever had. He’s all business, gets things done. He knows how to communicate with the public. I’ve never seen anyone so personable when he goes door to door.

“He wants to get the Quantico Creek Hydrilla problem sorted out, is good for business and understands that you need to attract economic development. He really really cares about human needs and is an advocate supporting human services.

“He’s definitely helped some of the military families talking to him about disabilities. I trust him, he’s very trustworthy, honest, a man of integrity. What else is there to say?”

Foreman came to visit her after she made a presentation to the Dumfries Town Council several years ago over the invasive Hydrilla weed growing nearby.

“He expressed interest in it, went out with us on a pontoon boat and took underwater pictures of Hydrilla. He got very involved in it. Then he got the council to take a stand, that they would take a role in trying to do something about the issues with the creek that goes up through Dumfries.

“All the previous mayors focused just on the town itself. Jerry is the one who reached out beyond the town limits; issues that affect the town, those affect us as well.

“He’s a very intelligent man, who reaches out beyond just his immediate situation. An example is Possum Point Road: The beginning of it is in town, then becomes part of Prince William County. Jerry had no reason to become involved at the time, there was no homeowners association, but he truly has reached out.”

Formerly on Town Council, known Foreman as a friend and government colleague for over eight years.

“He’s the type of guy, when he’s looking for answer for something, he doesn’t give up until he finds it. No iffy, maybe so, continue looking until we find the right one.

“He’s always trying to look out for the betterment of the town, things that might help the citizens. We’ve gotten sidewalks since he’s been mayor. A lot of little things, people wouldn’t realize were a problem. We’ve replaced a lot of light poles throughout the town. Streets that weren’t paved, we got those paved. The town took over of maintenance of town streets since he’s come into office.

“He’s broad-minded, disciplined. I admire him, got a lot of respect for him. He’s always fun to be with, a joy to have a friend that is there if you need him. He doesn’t butt in unless you ask him to, not a know-it-all fella.”