Fairfax County: ‘Reports and Tears Are Not Enough’
Votes

Fairfax County: ‘Reports and Tears Are Not Enough’ 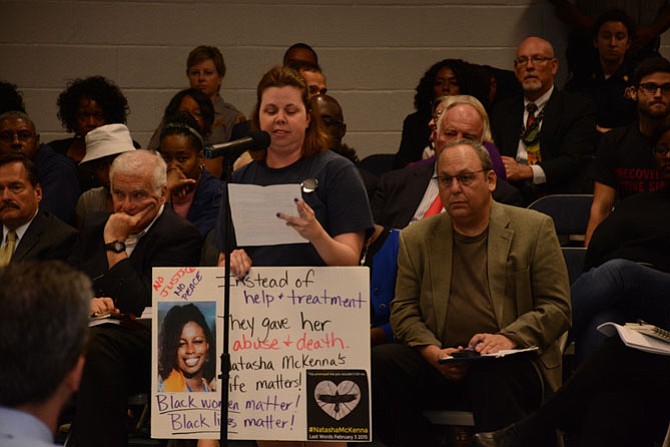 Cayce Utley of Centreville said she was “here because we killed Natasha McKenna.” Utley said people, including herself, need to be more proactive and vocal citizens with regards to policies and actions of police. “The outcome was deadly; someone should be responsible for that.” Photo by Tim Peterson.

Erika Totten of Alexandria compared McKenna’s death to the “casual slave killing” act in the Virginia code from 1669. “This is what we’re dealing with today,” she said.

Cayce Utley of Centreville said Natasha McKenna, the 37-year-old African American woman with mental illness who died in the Sheriff’s Office custody in February, must be “more than just a mistake, more than an accident. Black women aren’t your ‘Oops,’ they aren’t your teachable moments.”

Protesters Gather Prior to Public Forum

Alexandra and Angelo Napoli live nearby Walt Whitman Middle School in the Mount Vernon area of Alexandria. They stood, stoic, with signs reading “Say Her Name: Natasha McKenna” outside the school among a few dozen other protesters. The effort was organized through Facebook by the organization Northern Virginia Cop Block.

Conversations about how Natasha McKenna died have “been hushed,” said Alexandra Napoli, “It hasn’t been talked about. This is our community, we’re supposed to find safety in our police force.”

Watching the video of McKenna being forced to the ground outside her cell at the Fairfax County Adult Detention Center, then restrained, shocked with an electricity conducting device or “taser” and ultimately dying in the custody of the Sheriff’s Office, makes Alexandra Napoli “feel afraid.”

“This is where we live,” she said. “Whether there’s a misunderstanding or not, this happens.”

Amanda Moore used to live in Kingstowne, though now lives in Annapolis. “Whether it’s in Maryland or Virginia, these people are paid to protect us,” she said. “The video is just horrific, there’s no defending it.”

Mike Curtis of Manassas, with NOVA Cop Block, said, “It’s not that anyone here is anti-police, we’re anti-police killing people.”

Utley was one of nearly 30 individuals and organization representatives who spoke at the Sept. 14 public forum for the Fairfax County ad hoc commission to review police policies.

Though the work of the commission is focused mainly on the Police Department and came about largely as a result of the way the county handled the 2013 officer-involved shooting death of Springfield man John Geer, the forum provided residents with an opportunity to both hear the final recommendation report from the commission’s Use of Force subcommittee and voice their frustration about McKenna’s death and the lack of services for individuals with mental illness.

When Fairfax County Sheriff Stacey Kincaid released footage last week of McKenna being forced to the ground outside her cell in the Adult Detention Center by six male deputies, then restrained, shocked with an electricity conduction device or “taser,” and later losing consciousness and a heartbeat, it sparked outrage in the community.

RESIDENTS from all over Fairfax County, as well as Maryland and Washington, DC, filled the auditorium at Walt Whitman Middle School to capacity. Many were holding signs they had brought to demonstrate for McKenna in front of the school prior to the meeting.

Throughout the forum, several demonstrators cried out “Say Her Name!” (“Natasha McKenna!”) and other exclamations condemning the graphic scenes from the video, continued violent treatment of people of color by law enforcement and asking what was being done about it.

Erika Totten of Alexandria compared McKenna’s death to the “casual slave killing” act in the Virginia code from 1669. “This is what we’re dealing with today,” she said. “Her death was ruled as an accident. I have a problem with that. Natasha is me. Your reports and tears are not enough.”

“Their anger is understandable,” said Supervisor Gerry Hyland (D-Mount Vernon) who attended the meeting but did not speak publicly. “You can’t look at the video without saying this could have, should have been avoided.

“The fact they’re here, expressing angst over the case and how we deal with mental illness, is something the community needed to hear, they needed to be listened to,” Hyland continued.

Before beginning the forum, commission chairman Michael Hershman called on Use of Force subcommittee chairman Phil Niedzielski-Eichner to review the group’s final recommendations to the full commission.

Niedzielski-Eichner explained that the subcommittee’s work was “substantially augmented and facilitated” by a June 2015 report from the Police Executive Research Forum that included 71 recommendations for policy changes.

Among its 40 recommendations, the subcommittee called for a more clear and concise use of force policy, the collection and maintenance of “robust demographic data on all detentions and use of force,” limiting the use of SWAT “and other advanced tactics,” the employment of body cameras to record interactions with the public and establishing independent oversight of the police department.

Another recommendation proposed that Mobile Crisis Units for individuals experiencing a mental health crisis be expanded with three additional units.

SPEAKERS at the public forum who addressed the report were generally supportive of its recommendations, with the exception of its additional item that all police officers carry tasers on their person while on duty.

More information and materials from the police practices review commission are available online at www.fairfaxcounty.gov/policecommission. The next meeting will be held Oct. 8 at 7:30 p.m. at the Fairfax County Government Center, 12000 Government Center Parkway in Fairfax.

Fairfax County Sheriff’s deputies, wearing protective suits, can be seen forcing Natasha McKenna to the ground outside her cell at the Fairfax County Adult Detention Center in the video released by Sheriff Stacey Kincaid.

Three days after Commonwealth’s Attorney Raymond F. Morrow announced he had concluded his investigation of Natasha McKenna’s death while in the custody of the Fairfax County Sheriff’s Office, Sheriff Stacey Kincaid released the video of the incident. Her justification for not releasing it sooner was that it had previously been evidence in an ongoing investigation.

The 48-minute video, available to stream on YouTube at www.youtube.com/watch?v=jVs8B2Nmo5k&feature=youtu.be, begins with a message from the Sheriff: “I want all of you to know this tragic incident has been ingrained in my mind from the day that it occurred. There is no better way for me to share what actually occurred than to make this video available for the community to review it in its entirety.”

The graphic footage shows McKenna being removed from her cell and forced to the ground as she struggles against Sheriff’s deputies telling her, “Stop resisting,” and “Ma’am, if you do not stop resisting, you will be tased, do you understand?”

While being moved from the ground to a chair and restrained, McKenna received four shocks from an electricity conducting device or “taser” wielded by one of the deputies. He applied the taser twice in her lower body, twice her upper body, one of the deputies explains on the tape.

A medical team was called to check McKenna’s vital signs. In the hallway outside her cell, she was deemed stable enough to transport. When the team that was moving her reached the van waiting to take her to Alexandria, another check showed she no longer had a pulse. Deputies began performing CPR on her and were eventually relieved by Fairfax County Fire & Rescue.

McKenna’s body was put on a gurney and taken away in an ambulance, at which point the video ends.