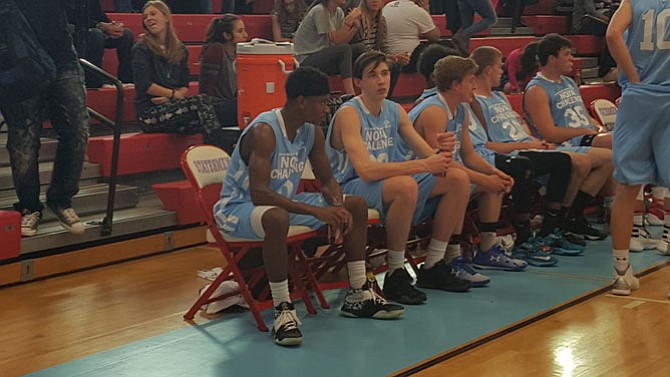 Westfield’s Blake Francis, left, and Centreville’s William Unterkofler, second from left, sit on the bench during the Nova Classic on April 10 at Marshall High School. Photo by Jon Roetman. 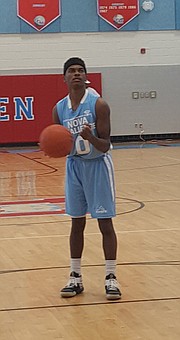 Surrounded by some of the most talented senior basketball players in Northern Virginia, Westfield’s Blake Francis and Centreville’s William Unterkofler made their mark during the dmvstream.com Nova Challenge — an event that included a pair of all-star games, a 3-point shootout and a dunk contest.

Francis and Unterkofler played for the Fairfax North All-Stars, which concluded the event with a 108-101 victory over the Loudoun County All-Stars on April 10 at Marshall High School. Francis, a second­team all-state selection, earned MVP honors for Fairfax North, finishing with 23 points, six rebounds and five assists. He knocked down a 3-pointer at the halftime buzzer, cutting the Fairfax North deficit to 64-50. Fairfax North outscored Loudoun County 58-37 in the second half.

Unterkofler scored 12 points and grabbed four rebounds. He also won the dunk contest, earning a perfect score of 30 on his final attempt, when he jumped, brought the ball between his legs and threw it down with his right hand.

“Hank, we’re going to be good friends for a long time,” Francis said. “It’s just good playing with him.”

Langley senior and Fairfax North All-Star Nate Shafer, a 6-foot-5 shot-blocking force, admitted he prefers structured basketball over the run-and-gun style of an all-star game, but that didn’t stop the defensive standout from excelling on Sunday.

While all-star games are known for offense, Shafer, the 2016 6A North region Defensive Player of the Year, made life difficult for Loudoun County players who tried to score in the paint.

Centreville senior William Unterkofler, with plaque, is recognized for winning the dunk contest at the Nova Challenge on April 10.

Fairfax High’s Alex McNaughton, who will play at Salisbury, scored 17 points and shot 6-for-9 from the floor, including 3-for-4 from behind the arc.

“It feels pretty good,” Ungerleider said about getting the victory. “Mostly, we’re just out here having a good time, but [I] always want to win.”

Ungerleider, who will attend the University of Virginia but doesn’t plan to play basketball, reached the finals of the 3-point shootout.

“It was pretty scary,” Ungerleider said, referring to media attention during the competition. “I had to get in a little zone and zone out everything around and just shoot.”

Earlier in the day, the Prince William All-Stars defeated the Fairfax South All-Stars 110-107.

“It was great,” Djonkam said about competing in the event. “Every kid on the court I love. I grew up with half the kids on the court. ... [It was] my last time playing with the kids. It was great. I loved it.”