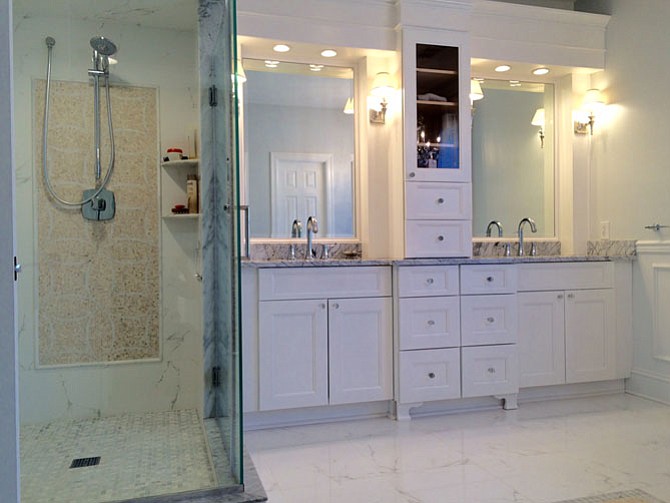 Marcelo Dobrauchi notes that, while a modular home costs 15 percent less than a “stick-built” alternative, its customization and finishwork potentials are comparable. Photo courtesy of Terranova K&B 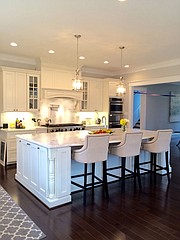 The starting point in designing the Tersio-Dobrauchi gourmet kitchen was a 4-foot-by-12-foot food preparation island that parallels a six-burner gas range. The surface is Italian marble. The 4,500-square-foot residence is a modular home designed by the owners who wanted to explore how completely they could customize the original plan. The house will be open to the public June 11. 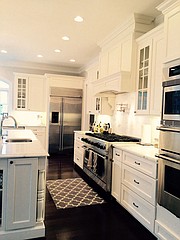 The cook's work triangle was configured to facilitate interaction between the food prep island, the gas range and stacked ovens (right), and the refrigerator/freezer. 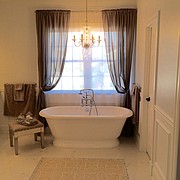 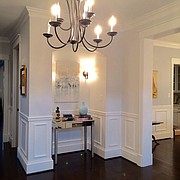 What's behind the growing popularity of modular homes? Recent research shows that a house comprised of architecturally-specific, pre-constructed modules can be assembled on a homeowner’s lot for 10-15 percent less than of the cost of a comparably-sized “stick-built” house. A house that would normally cost $500,000, therefore, can be designed and constructed in the $425,000,00 range.

Moreover, a modular home — one that's been designed as appreciably finished components produced under factory conditions — is a solid piece of work. To assure units can be shipped and installed safely, framing material is substantially reinforced. Also, since the process generates less waste — it can be an eco-friendly choice.

Modular homeowners Marcelo Dobrauchi and Rita Tersio, husband and wife, are eager to show people what's possible and to share their journey.

What you'll see from the curb is a lovely, seemingly-traditional Colonial-style home that's actually composed of pre-constructed modular units.

The components were assembled in Pennsylvania, loaded on six flatbed trucks and delivered to their new half-acre destination in less than a day. Modules were then assembled on the site in two days.

The follow-up consisted mainly of interior finish work tasks like installing the Brailizan etuve flooring or the glass facing cabinets in the master bathroom, kitchen and butler's pantry.

Tersio and Dobrauchi moved in with their two children this past November and soon began entertaining friends.

For the couple, who operate Terranova Construction K&B, the move has inaugurated a new phase in their professional development. As a rule, they had concentrated on remodeling solutions in conventionally constructed “stick-built” homes. But in 2003 on a business trip in Pennsylvania they witnessed a pre-constructed housing component being whisked through the air on a crane and decided to investigate.

“In an instant we saw how much more solidly constructed a modular home is than a house built by traditional methods,” Tersio said. “We decided to familiarize ourselves with the current practices. Basically, we wanted to know how effectively a home coming out of this process could be customized.”

One decision led to another and last year the couple purchased the Vienna lot, which soon became the site of the 4,200-square-foot, two-level structure they had shepherded from rough sketches to the finely detailed residence they now occupy.

“We wanted to comparison-shop two building methods,” Tersio said. “As remodelers, we often see clients agonizing over price differences in upgrade choices. So we asked ourselves: suppose the homeowner has already saved a substantial upgrade voucher since the house itself costs less to construct? Since our specialty is interior design, we thought this alternative process was worth exploring.”

Certainly this concern for presentation is evident in their new home where the couple opted for formal finishwork detailing and personal-use spaces throughout.

There is a 140-square-foot master bathroom with custom-cabinetry and fine mosaic tiling; a 200-square-foot formal dining room that incorporates wainscoting and embossed paneling; aspacious in-law suite; and a family room designed for puzzles and board games. There is a second floor art studio and above all, a suite of rear rooms that revolves around a gourmet kitchen.

To put their new kitchen to the test, the couple sponsored a cooking class last January led by Luca Tinti, a Tuscan chef who is also engaged to Tersio's sister.

“We wanted to welcome Luca to the family,” Tersio said. “But were also responding to people who wanted to see just how customized a kitchen designed from a modular construction process can be.”

At the end of the day, Luca's satisfaction that his requirements had been met spoke volumes.

“This space was obviously designed for serious cooking,” Tinti said. “For instance, there are sources of water in all the right places ... pot-filler behind the gas range, the sink on the food prep island and the bow-shaped farm sink.”

The 4-foot-by-12-foot food prep island, for instance, is positioned to support work triangles formed by perpendicular counter surfaces on either side of an archway which segues to the butler's pantry and formal dining room beyond. The island also doubles as a three-stool dining counter.

It's a plan that allows one dish to marinate — while another is being sauteed on the gas range, and a third is in the warming oven.

As a chef, Luca particularly appreciated finding all the necessary cooking implements at his fingertips.

“I could swivel in one direction and find cooking utensils, specially-sized pots and pans, and mixing bowls in custom-designed drawers” he said. “In the pantry, there's a special cubby for the pasta-maker. There's even a case for cookbooks built into the island.”

None of this praise is a surprise to Dobrauchi, who is a seasoned kitchen designer. Still, the ease with which he could execute the kitchen's finishwork was a pleasant departure from the realities of the stick-built process.

“My experience in designing this house may be somewhat like that of a playwright who is so close to every detail of his work that he's completely forgotten about the audience until opening night. Suddenly people are excited about effects they are seeing for the first time, and all I can say is ‘Yes, that's the reaction I intended to inspire.’”

That said, Marcelo is equally enthused about the home's master bathroom, formal dining room and the old-world elegance of the spacious family room.

“The modular home design process can remove a lot of drudgery because you have the option to work with pre-existing templates,” Dobrauchi said. “On the other hand, there's nothing you can't adapt to your requirements, and this allows the homeowner to concentrate on interior design, which is the arena where they really get to express themselves.”

John Byrd (byrdmatx@gmail.com or www.HomeFrontsNews.com) has been writing about home improvement for 30 years.