Alexandria: ‘Show Me the Money’
Votes

Alexandria: ‘Show Me the Money’ 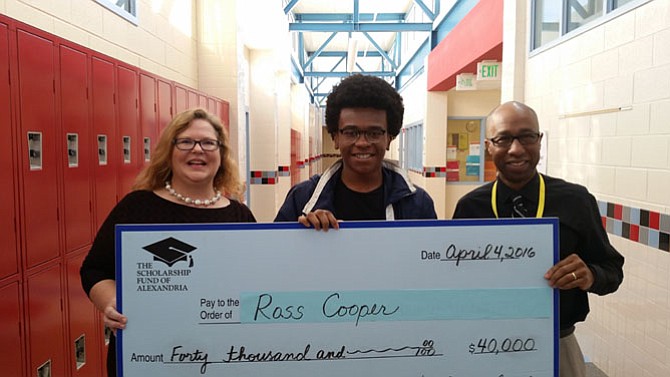 Move over Jerry Maguire. The Scholarship Fund of Alexandria is turning 30 and is looking to celebrate big, with a goal of raising $1 million for T.C. Williams students at its annual Spring Gala and Silent Auction April 23.

Inspired by the donations of Alexandria Toyota owner Jack Taylor, the SFA board decided to aim high and announced its own $50,000 fundraising drive in the final week leading up to Saturday’s gala.

“Jack Taylor has been so great to us,” said SFA executive director Beth Lovain. “He’s helped us raise millions of dollars over the years. Because we want to meet the financial needs of our recipients for all four years of study, we are working harder this year to raise money for every student.”

“This scholarship makes it completely possible for me to finance college,” said Ross, who was presented the award April 6 during a surprise visit by Lovain to his AP French class. “It has been a long four years in high school and I am very grateful for this scholarship.”

The Scholarship Fund of Alexandria awarded $436,000 in college scholarships to 159 T.C. Williams High School seniors, who gathered for a group photo April 6. The SFA 30th Anniversary Gala and Silent Auction will be held April 23 at the Hilton Alexandria Mark Center.

Ross, who plans to pursue a career in water resource management and policy, is the winner of the Madelyn Anderson Memorial Scholarship. Former Washington Post reporter John W. Anderson established the scholarship in 1992 in memory of his wife, who was a former teacher for Alexandria City Public Schools.

The announcement was the culmination of the awarding process for SFA during which $436,000 in scholarships was awarded to 159 TC seniors. Approximately 85 percent of the scholarship amounts are given to students with financial need in addition to showing merit. SFA will also award approximately $500,000 in renewal applications to previous TC awardees.

“Our Fall Fund Drive and Spring Gala are our two signature fundraising efforts,” Lovain said. “Approximately 93 cents of every dollar goes right to the scholarship fund. If we are able to raise $400,000 this weekend, we’ll be able to give out over $1 million this year.”

According to Lovain, tickets are still available to the April 23 Spring Gala, which will be held at the Alexandria Hilton Mark Center.

“So far we have more than 475 people attending,” Lovain said. “It’s still the biggest party in Alexandria.”

“We owe our thanks to the community,” Lovain said. “Knowing they are there for the kids and want so much for them to succeed inspires us all.”

For tickets or more information, call 703-824-6730 or visit www.AlexScholarshipFund.org.