Crime is not welcome at 12 National Night Out block parties in the Fair Oaks District. 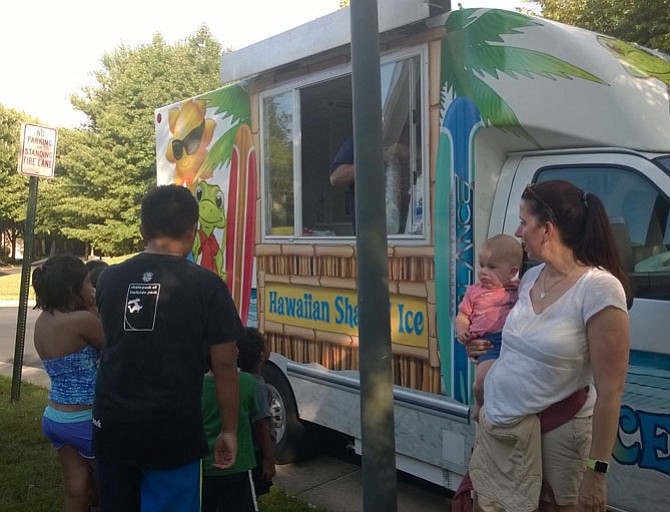 Anne Marie McCaskin, 37, holds her 24-month-old son, Toby, and watches their young neighbors line up for free shaved ice at a National Night Out block party held Aug. 2 in the Random Hills townhouse community near Fairfax Corner. She appreciates her local law enforcement agency and doesn’t want her kids to be afraid to ask for help from police officers when they need it. Photo by Marti Moore/The Connection 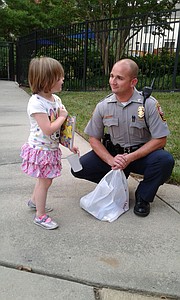 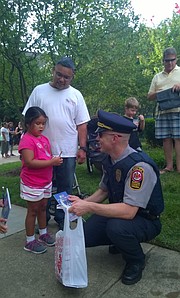 At first, National Night Out was a simple gesture citizens made to show their support for local law enforcement: Turn on the front porch light the first Tuesday night in August.

For the next few years, citizens nationwide turned on their lights and sat outside on their front stoops to show criminals they’re not welcome.

During the next two decades, the movement grew into block parties and carnivals at which residents celebrate safe neighborhoods with cookouts, potluck dinners and ice cream socials.

Twombly said the Random Hills gathering was among 12 events throughout the Fair Oaks District — the largest of which occurred in the Franklin Farm subdivision.

Anne Marie McCaslin, 37, said Tuesday was her fourth year participating in National Night Out. She heads the social committee of the Random Hills Community Association and believes this annual event has helped her neighborhood build a community in which law enforcement officers are comfortable patrolling their streets and residents feel comfortable having a police presence.

Although her homeowners association doesn’t have a community crime watch program, “We do pay attention,” McCaslin states. She and her neighbors check police blotters on a regular basis.

Despite recent public outcry across the country over police shootings, Marsh claims, “We have seen a lot more citizens stop by the station dropping off cookies and cards” as a show of community support for local law enforcement.

“It’s a partnership community and police have together,” Marsh states. He believes it’s an understanding “we are all in this situation together when it comes to public safety.”

National Night Out started out in 1984 with funds from the U.S. Department of Justice that were distributed to 400 communities across the country by the National Association of Town Watch.

The main goal, she says, is to get neighbors together with their law enforcement officials in non-emergency situations to find ways to build safer communities.

Visit https://natw.org to learn how you can organize your own block party or carnival for next year’s National Night Out.

FOR INFORMATION on crime prevention and awareness, read the FCPD website at www.fairfaxcounty.gov/police — including a section about “What to Do When You Are Stopped by Police.”