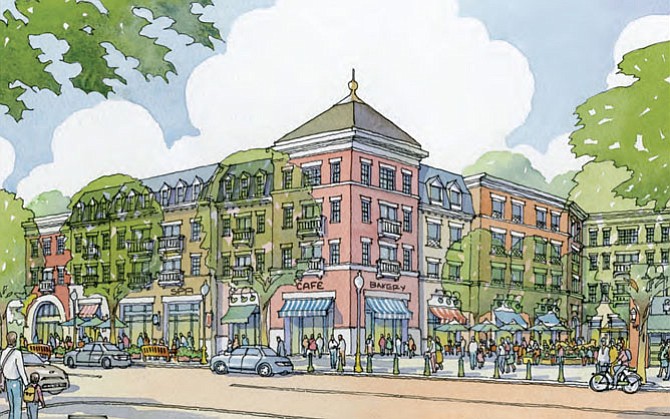 The Elden Street Plaza provides ground floor retail, such as a coffee shop, bakery/deli, or small store, as well as a restaurant with outdoor café space that will draw people through the pedestrian street. Photo by Fallon Forbush.

Herndon — During a special meeting on Nov. 30, the Herndon Town Council adopted a resolution that directs town staff to move forward with negotiations on a proposal for the redevelopment of nearly five acres of downtown Herndon.

Reston real estate firm Comstock Partners submitted the supported proposal, which lays out plans to redevelop the area that is bordered by Station Street to the east, Center Street to the west, the Washington and Old Dominion Trail to the north and Elden Street to the south.

One of the goals of the downtown redevelopment is “activating the space with more people living downtown,” says Herndon Mayor Lisa Merkel. “Like any real-estate transaction, there will be back-and-forth offers and negotiations. We have some questions and some things that we would like to iron out.”

The redevelopment has been years in the making. The town requested proposals last year that were to be tailored to meet specifications laid out in its master plan, which was adopted back in February 2011.

“The real work begins now in negotiating the contract,” says Merkel. “There’s a lot of work to do to get to a contract that we’re comfortable with and that Comstock will accept, but we all want it to be successful and it needs to be financially viable for Comstock and for the town.”

The Arts Walk is the heart and life of Comstock’s proposal. Framed by the Arts Center on one side and loft units on the other, it is an intimate street with meandering landscaping. Art displays and sculptures can be featured and the street itself can become outdoor space for the Arts Center activities.

It was important to Merkel that the sitting council made the determination of which firm to negotiate with before new councilmembers take office in January.

“It’s been the biggest thing that we’ve worked on in the last two years,” she says. “I’m pleased that it came together—finally—while the current council was still in office.”

While the council prefers Comstock’s plan, the town also received one other proposal from the Stout and Teague Company.

The primary differences between the two proposals is that the favored plan fulfills the residential requirement with luxury apartment units while the other envisioned 17 townhomes, 55 condominiums and 105 hotel rooms.

Merkel supports bringing luxury apartments to the downtown area because it is something that Herndon does not offer right now. Hotels are another story.

“We didn’t see a screaming need for yet another hotel that may or may not be full and would compete with all of the other hotel assets in the region that serve Dulles Airport,” says Maggie Parker, spokesperson for Comstock Partners. “We preferred housing more people on a seven-day-a-week basis.”

The town would own the arts center and 280 parking spaces within the parking garage, according to Parker. The private developer would own the housing units, retail space and additional parking units.

“What we need to figure out is all of the responsibilities for the public spaces and their long-term improvements,” says Parker.

The plazas would primarily be the town’s responsibility, but Comstock has offered to assist in maintaining the spaces, she says.

This would be the third development Comstock has done with a local municipality, says Parker. The first development was with Fairfax County for the Reston Station neighborhood off the metrorail’s Silver Line at the Wiehle-Reston station. The second was with Loudoun County to build a parking structure for the metrorail off the same line.

Public meetings and hearings were held over the last year to discuss and evaluate both proposals. If negotiations are successful and a comprehensive agreement draft is developed, the council will hold more public meetings.

IT IS ANTICIPATED that a public hearing about the specific terms of the contract and project will be held in spring 2017. Construction would take 24 months.

“Experience is a good friend,” says Parker. “This process should move forward. The devil is in the details, but we’re used to doing this and we’re really excited to get started to finalize this comprehensive agreement.”