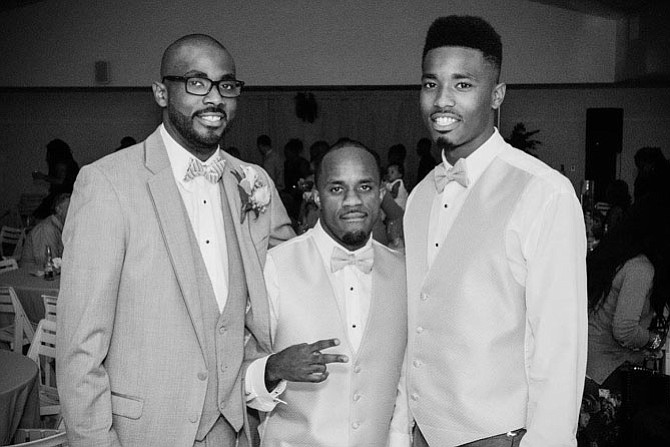 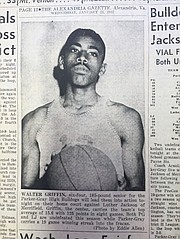 Walter Griffin was an all star. Griffin led the Parker-Grey Men’s Basketball team to win the State Championship in 1955, 1956, and 1957. The team had a 38-game winning streak, winning their last 12 games in 1956 and going undefeated in 1957. Newspaper reports are filled with stories of Griffin sweeping over the court. At a school board meeting on Dec. 1, Griffin and four others were voted into the Alexandria City Public Schools Athletic Hall of Fame. But for Griffin Smith, he will always be dad.

“I remember him being larger than life,” said Smith. “He was tall, always picking us up, taking us to grocery stores. I remember him being there for us. This other stuff, the basketball, learned all that after the fact. I didn’t know about that while he was alive … All he wanted to do was be a dad. Nothing else really mattered. That’s why he never told me about the basketball stuff. That was a lifetime ago for him.”

Smith suspected Griffin’s basketball memories had also been tainted by his experiences in college. After graduating from Parker-Grey, Griffin attended University of Connecticut and continued playing basketball. During one game his freshman year, his mother collapsed and died in the stands. A few months later, Griffin lost his father as well. Afterwards, basketball became a smaller part of Griffin’s life. He focused on engineering, working for Western Electric for 25 years before retiring to take a job working on cars. Griffin was at work when he died.

When Smith was 13, he came home from basketball practice to find a note on the door saying to call his aunt. He and his younger brothers went to their house, where they sat down and their aunts explained that his father, 57, had died as a result of an enlarged heart. Smith said it took a while for his father’s death to sink in.

“[My family] lived together in two different houses,” said Smith. “He was always around but it was in two different houses. So when they said he was gone, it took a while for me to actually mourn. It took years. It changed the whole dynamics of the family. I instantly became a different person. I was shielded from a lot of things. I went to MacArthur while everyone else in neighborhood went to George Mason. Mom and dad shielded me. It was all about books and learning. Once he died, everything opened up. I realized I lived in a bad neighborhood. She was gone too, she was in mourning.”

Smith said his father’s death forced him to grow up faster. His younger brothers were seven and four when their father died, and Smith had to help raise them. Smith continued playing basketball after his father’s death, which was how he met Robert Dawkins.

The first time Dawkins met Smith, Dawkins said it was like seeing a ghost. Fifty years earlier, Dawkins had played on the Parker-Grey High School basketball team with Walter Griffin.

“I happened to walk into the gym at George Washington Middle School and when I walked through the door, I saw the figure, and it was identical to Walter Griffin. I said ‘goddamn, that’s him!’ All I could do was stand there and stare,” Dawkins said.

Afterwards, Dawkins approached Smith and said that he’d briefly known Smith’s father and offered to talk about their times together. As Dawkins showed Smith the newspaper clippings, Smith said it was the first time he’d started to learn more about his father’s past. As Smith grew up, slowly more and more people began recognizing Smith as Griffin’s son and approached him, sharing stories about his dad. Basketball was a recurring theme, but Smith said what stuck with him were the other stories about his dad. As they looked through the old newspapers, Smith said he remembered Dawkins telling him the clippings will only talk about basketball, they won’t talk about how intelligent or how determined Griffin was.

“He was really likeable, so full of confidence,” Dawkins remembered. “Walter [Griffin] has earned this.”

Nelson Greene Jr. was a couple years behind Griffin but said a lot of the students at Parker-Grey had grown up as neighborhood friends. Greene said that during halftime, Griffin and his girlfriend Ruby at the time would go to center court, back to back. Ruby was the head cheerleader and was nearly as tall as Griffin. Greene said they would each kick off from there, simultaneously dunking on either end of the court. The crowd would go wild. Greene said it was the highlight of each game.

Parker-Grey was Alexandria’s all black high school, and though its athletic feats weren’t as widely covered in the papers as those of the white George Washington High School, Greene said the relationships between their basketball teams was closer than most people realized.

“One year, when Walter [Griffin] was on the state championship, George Washington were also state champions,” said Greene. “What people did not know is those two teams used to get together once a week and play against each other.”

Sometimes they would meet at the school, and coaches would just disappear. Other times, Greene said the teams would agree to meet at a basketball court somewhere in the city.

“The teams would have a scrimmage against each other,” said Greene. “That’s why they were so good. As a result, there were lots of people across that racial boundary that became friends. You had exceptional young men on both sides.”

Greene was vice president of the student council at the time and said the two schools tried to coordinate a game to benefit the Salvation Army. Greene said the students, coaches, and school officials all agreed, they even had 20 police officers volunteer to be security at the event and City Council had promised to attend, but when the School Board found out there were complaints from parents and the game was cancelled.

“Walter [Griffin] was very smart guy,” Greene said. “He was very nice. Some jocks weren’t, but he was.”

As more time passes, Smith said many of those connections to his father and Parker-Grey begin to disappear. The threat of losing those connections has also forced Smith to make life changes, like forging a closer relationship to Smith’s older sister who remembers more about their father. Smith said she was just as shocked as he was when she discovered the full extent of their father’s local fame. Smith is putting together a documentary about Parker-Grey and about his father to preserve those stories and those connections for his younger brothers and his children.

At 34, Smith has two children of his own. For Smith, being a father has changed some of his perspective on his dad’s life.

“When you start having kids, you realize these kids aren’t going anywhere,” said Smith. “When you bring them home from the hospital these are your kids. It changes the way you deal with things. These kids need you. If you go out and do something stupid, it doesn’t just affect you, it affects them. Everything I do has a trickle effect, I remember my grandmother saying that too. If you don’t do what you were made to do, it impacts everybody. I didn’t understand what she meant by that, but when I was a father I understood.”