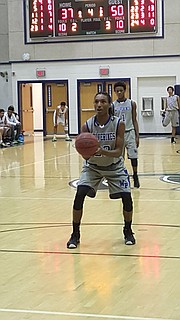 Due to potential inclement weather, the start time for Friday's Conference 7 contest between West Potomac and South County was moved up. The game eventually tipped off around 4:45 p.m., roughly 35 minutes after the visiting Wolverines got off the bus, head coach David Houston III said.

Despite limited preparation time, West Potomac, for the most part, went through its usual pregame routine.

“The good thing is, because so many of these guys have been playing together for so long, I don’t have to say a lot of stuff,” Houston said. “I think in previous years or on a different team, it would throw us off. But today, we all knew what we came here to do.”

The Wolverines didn’t need a lengthy pregame pep talk to get focused. Once the game started, West Potomac didn’t need much time to take control.

The Wolverines built a 17-4 advantage in the first quarter, led by 22 at halftime and defeated the Stallions 59-45 at South County High School in Lorton.

West Potomac dominated early and led 35-13 at halftime after senior forward Jamie Sara chased down a rebound and buried a corner 3-pointer with 27 seconds remaining in the second quarter.

South County cut the lead to nine in the fourth quarter when junior guard Garrett Reaves scored on a putback with 6:10 remaining, but West Potomac freshman Daryl Mackey answered with a 3-pointer and the Wolverines led by double digits for the final 5:30.

West Potomac opened the game with an 11-2 run and led 17-4 after junior guard Khalil Williams Diggins made 2 of 3 free-throw attempts with 2.3 seconds left in the first quarter.

South County managed just four field goals in the first half, including a buzzer-beating, three-quarter-court heave by junior guard Andre Austin to end the opening quarter.

“They dealt with [the early tipoff] way better than we did,” South County head coach Travis Hess said. “I really thought that because they had to get on the bus and rush here and only have 10 minutes to warm up and we were able have a walk-through like normal, have a shoot-around [that was] semi-normal and had more time to warm up, I actually thought that we would be crisper from the start and we weren’t. We didn’t shoot the ball well --- that doesn’t help --- but they’re just so hungry. David does such a good job with those kids. They’re ready to play, they’re tenacious, they rebound and they just played way harder than we did to start the game.

“When a team is playing much harder than you and you’re not shooting well, it’s going to get bad quick and that’s exactly what happened. They’re a really good basketball team.”

“I think we bring two things: it’s defense and rebounding,” Sara said. “…We have [Da’Jon Bellfield], his brother (Da’Juan Bellfield) and me [in the frontcourt]. Most teams can’t compete with [players who are] 6-3, 6-4, all of us crashing at once. … It’s just something that we bring in our bag every day --- all of us trying to get more rebounds than the other one.”

“We don’t have any [6-foot-7 players, but] we’ve got a bunch of 6-3s and 6-4s and those are like the hardest (to deal with)," Houston said. "They check out well, they’re long [and] we’ve just bought into the fact that rebounding is going to win. We’re not going to shoot the ball well every game and we know that, but if we rebound, we think we have a chance.

“… We’ve battled some of the biggest guys in the league. We’ve battled [6-foot-8 Lake Braddock senior James] Butler and we’ve battled [6-foot-9 West Springfield senior] Lewis [Djonkam] and they can see they’re standing up to those guys. It doesn’t really matter how high you jump, how tall you are, we’ve shown that we can rebound with anybody.”

“He can play,” Houston said. “The kids like him, they’ve known him a long time, he’s been around awhile. He’s coming along. I’m not going to lie and say I knew he’d be where he is right now --- he’s playing a little bit above where we thought he would be. He listens, he tries hard, he hustles, he doesn’t say anything on the court --- he just lets his play [speak] for him. He’s an excellent addition to our team.”

After starting the season 3-6, including 0-2 in the conference, West Potomac has won nine of its last 10 games and sits in second place in Conference 7 with a 9-3 record. On Wednesday, the Wolverines traveled to West Springfield and handed the first-place Spartans their first conference loss, 59-53.

“I feel like we’re reaching our potential but we’re not fully there yet,” Da’Jon Bellfield said. “If we do reach that potential, then we’ll be unstoppable going into the playoffs.”

South County fell to 7-13 overall and 4-8 in the conference. As of now, the Stallions would be the No. 7 seed and would face West Potomac in the opening round of the conference tournament.

Last season, the Stallions entered the conference tournament as the No. 7 seed and proceeded to knock off the top three seeds and capture the program’s first conference championship.

Hess said it's good to know the Stallions are capable of a bounce-back performance in the conference tournament, but this year's team is still focused on finishing the regular season.

“We don’t even know who we’re going to play (in the conference tournament),” Hess said. “... We have an idea where we could be, but things could change, so right now we’re just going to ... try to beat West Springfield [today] and then we’ll gear up for whoever we play once we know who that is.”