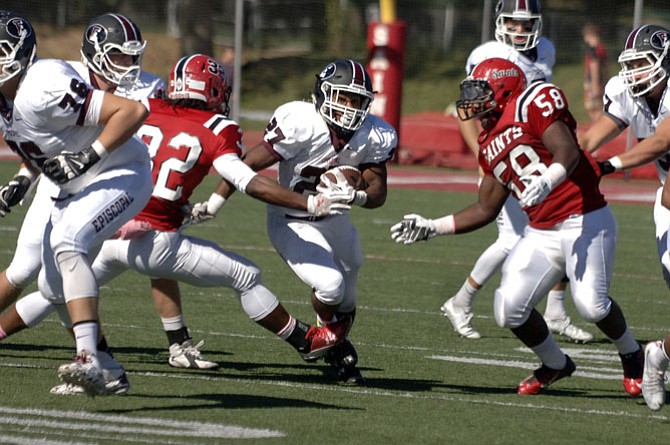 Episcopal senior Eli Blair-May rushed for 1,108 yards and nine touchdowns in eight games during the fall. Photo by Craig Sterbutzel.

A snowstorm covered parts of Northern Virginia in more than 20 inches of snow during the weekend, according to the National Weather Service, creating a break from competition for local high school athletes.

Episcopal senior Eli Blair-May, a running back for the school’s football team and captain of the indoor track team, shared his storm experience via email.

A: About a week before the storm I heard about how bad it was projected to be, but I didn't think it would be this much at first. The days leading up storm I felt differently as the city and area started calling for a state of emergency and to really prepare for it.

A: My family stocked up on a lot of food and water before the storm hit.

A: I actually brought a few of my friends home with me from Episcopal so we spent a good amount of time battling it out in 2K and watching Netflix.

A: I didn't really play in the snow, but I did walk to a 7-Eleven around midnight, which I enjoyed because it's never really that peaceful out. I enjoyed the calmness of it.

A: If you consider pushups and sit ups before bed truly exercising, then my friends and I were all for it during the storm.

Q: Are you going to play college football? Do you know where you're going?

A: I am going to play college football. Although, I don't know where that will be this upcoming year.