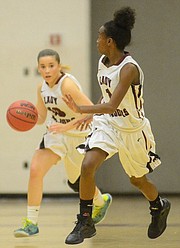 A: I really didn't think there would be this much snow. I thought it would be a few inches, maybe get us out of school for a little, no big deal, but this was a lot of snow.

A: My mom and I went to the grocery store before the storm hit to make sure we had enough food to last us. We also bought firewood in case there was some type of power outage.

A: To pass the time, I definitely spent a lot of quality time with my family. We usually don't get to spend time together because I'm always busy with basketball, and my mom is a single parent so she works a lot.

A: I did play in the snow with my niece. We attempted to make a snowman but this was when the snow was kind of powdery, I guess you could call it. Not very good for snowman making. We also had a little snowball fight. It was a lot of fun.

A: I wasn't able to do much exercising, except for of course pushups and stuff like that. I did spend hours outside shoveling snow. I also watched a lot of basketball just to keep my mind on the game.

Q: You're interested in playing college basketball, correct? How is that process going?

A: I hope to one day play ball in college like my sister (West Virginia guard Chania Ray). The process is going OK. I know it must be tough for my mom because it's not coming as easy for me like it did for my sister. However, she's been a huge help. My mom knows her way around the college recruiting process. I've been keeping my options open so I can be certain I make the best decision on where I spend my next four years.

Q: You scored 25 points in a recent win over Annandale. Is that a career high for you? If not, what's your career high?

A: That game was actually not my career high. I scored 26 in a recent game at the Title IX tournament my team participated in against Meade High School. I scored 21 in the fourth quarter alone. I honestly don't know what came over me. I just took over the game. We were losing by almost 20 points until the fourth quarter. I got us to only being down six. We ended up losing that game, and Meade went on to win the tournament. It's never fun to have a game like that and lose but I wasn't too hard on myself.

Q: What will it take for the team to build on the Annandale win coming back from the snowstorm?

A: It's going to be very hard to come back from being gone all this time. I know for a fact some girls haven't done anything over break because it's so easy to lay in bed and be lazy because of how busy we usually are. We're going to have to get back in shape, if that means running or whatever coach thinks we should do we will do. I hope our losing streak is now over and we can start to be the team I know we are. Although my senior year has been tough because of all of the losses, I can honestly say that I'm proud of how much adversity my team has overcome and I wouldn't want to spend my senior year with any other team.