Looking Back at Two State Championships 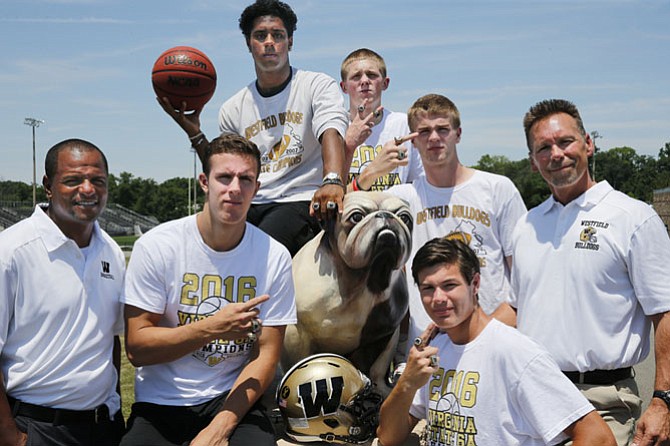 The athletes’ schedules haven't slowed much. The juniors left for a combo camp, and the seniors hurried off to do a walk-through for their high school commencement which was the following morning.

How will this impact future student athletes both at Westfield and in Fairfax County?

“At Westfield we have set the bar extremely high,” Johnson said. “With Coach Simmons, and Coach Ewell and all the coaches in place at Westfield, all future students at Westfield have the opportunity to compete for, and eventually become champions.”

Scanlon added, “I think that this year raised the bar for not only Westfield, but for Fairfax County football and basketball in general. Westfield has long had a ‘tradition of excellence’ and the students there understand that success is expected, as it comes along with the hard work and dedication put forth by the student-athletes there. The rest of the county is now challenged to emulate our achievements, and being complacent coming in second to a tidewater team shouldn't be accepted.”

Huling also added, “Ithink there is a high standard for success now in this area. A lot of state championships were won this year and this drives the athletes to work harder and want to be better so they can match what the class of 2016 has accomplished.”

When Johnson, one of the three seniors, was asked which was the most difficult championship to win, he replied, “Both were difficult in their own ways. Football we had so many different setbacks, from our suspensions to our best player (Jack Clancy) being out for the year, we had to re-find ourselves time and time again. At some point I wasn't sure if we could pull it off, that we had been through too much and we had dug ourselves a hole we weren't gonna come out of. In basketball, right before the regional playoffs started, Blake and Tyler, our two best players, were very, very ill and weren't themselves in the opening round. Players had to step up, I had to step up, and, of course, we lost to Battlefield — which crushed us emotionally. I really felt like we had packed it in. But just like football, we found ourselves in ways I would never have imagined. Both seasons were so incredibly draining in so many different ways, and there were so many times I doubted if we could pull it off. I'd give the edge to football. It seemed like every week there was something else that could potentially hinder our success.”

Eckert added, “I've learned that you accomplish as much as you put in. The countless hours and green days of preseason work is the foundation to our success and just like in life the amount of work you do will often reflect your success.”

Huling will continue his education at East Carolina in the fall and Hank Johnson will attend Radford University and Scanlon will attend Boston University. Both Rehman Johnson and Eckert look to add to their Westfield championships in the fall.