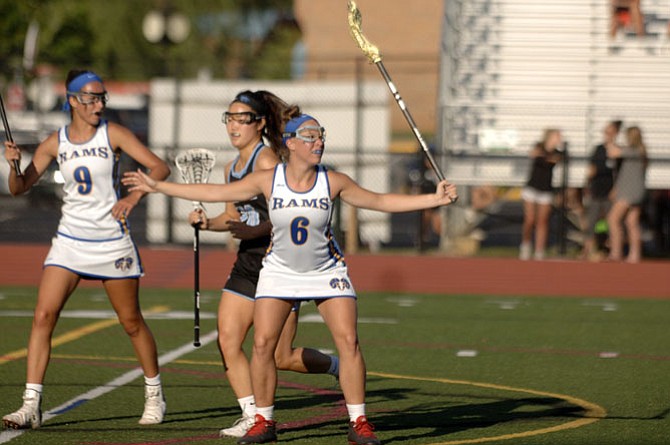 There are many things to behold about the Robinson girls’ lacrosse team.

The consistent offensive pressure, and regular faceoff success are a couple, but perhaps the most undervalued part of the Rams’ success resides in the backend, with the reliable defense and goalkeeping they’ve been playing over the past two seasons.

The Rams’ defensive play was key in driving them to a 19-7 victory over Centreville Tuesday night at Robinson Secondary School, earning them a trip back to the VHSL 6A state championship game, a game they won about a year ago.

“I think we’ve worked a lot on our defense this year, and it’s shown,” said Emily Skrzypczak, an Ohio State commit. “When our defense can get a takeaway and run it up, we can give such a good push for our offense.”

The offense got a great push early on as three goals from Elli Kluegel and a goal from Taylor Caskey had them up 4-1 early on.

Centreville stormed back, however, with back-to-back goals by Elizabeth Murphy before a goal by Jamie Chang tied it at 4 midway through the first half, causing Robinson head coach Liz Case to call a timeout.

“I just basically said they had to get tougher and they had to want it,” said Case. “[Centreville] showed up early ready to play—we had to show we wanted to win and fight back. For the most part I think we did that.”

What Case said made a difference, as after the timeout the Rams scored seven unanswered goals, including two by Katie Checkosky and two more by Caskey, which gave Robinson the 11-4 halftime lead.

“Coach [Case] wasn’t happy, I’m not going to lie,” Kluegel said. “It’s not often we’re down like that early, so it was a different situation for us. But coach told us if we wanted to win this game it had to start right then, and we stepped on the gas and didn’t let off.”

That proved to be the big momentum swing of the match, as Robinson didn’t look back from there, and the Rams’ defense took over, allowing only three Wildcat goals the rest of the contest.

Another factor that helps the Rams defense stay consistent is the performance of goalkeepers Maddie Malone and Danielle Valenti.

“Our goalies are phenomenal,” said Skrzypczak. “We all know we’re going to make mistakes, but when you know you have someone behind you to back you up, it’s a great feeling to know you have that.”

After Centreville scored two quick goals to open up the second half, a momentum swing occurred again as Robinson rattled off another seven unanswered goals to push the lead to 18-6 with 12 minutes to play.

“The defense has been doing really well,” said Case. “They’re able to communicate well and do more things than they’ve ever done before. They’ve been working together for so long and they know each other well, so it’s great to see them playing good together.”

Each team would add one more goal each to make the final score 19-7 in favor of the defending state champs.

For Robinson, Kluegel and Caskey each netted five goals and an assist. Grace Tompkins, Kaitlin Luccarelli, and Checkosky also scored goals for the winners. Murphy scored four for Centreville while Chang and Emily Marciano also put in goals for the Wildcats.

As for back-to-back state title hopes, you can bet it’s on the players’ minds.

“Honestly, as a senior, this will be my last game ever [at Robinson] and I expect nothing other than a win,” said Skrzypczak. “I love these girls, we’re a family. So I’m definitely excited to play my heart out one last time with them.”

Robinson (20-0) will face Woodson for a shot at winning its second consecutive state championship at noon on Saturday, June 11 at Lake Braddock Secondary School.