120-bed facility to be built in Fauquier County. 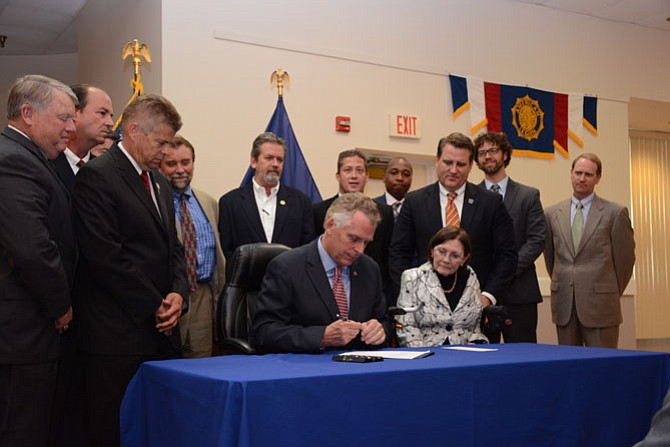 Gov. Terry McAuliffe (D) said he’s working on making Virginia the most veteran-friendly state in America. Though the Commonwealth, he said, is the first and only one to have “functionally ended veteran homelessness,” it still has one of the lowest ratios of available care centers to number of veterans in the country.

Seven years ago, he and the General Assembly started the process of increasing the number of care centers to serve Virginia’s around 800,000 veterans.

In 2015, they authorized a new veterans care center. Tired of waiting for assistance from the federal government, McAuliffe said, this year Virginia is moving forward on its own with building a pair of new centers.

“Talk is over, talk is cheap,” McAuliffe said, “we now have action.”

McAuliffe visited American Legion Post 176 in Springfield on June 1 to sign House Bill 477, which allows for $29.3 million in bonds plus financing costs for constructing veterans care centers in Northern Virginia and the Hampton Roads areas.

The Northern Virginia location, he announced, would be built on the Vint Hill Farm area, land donated by Fauquier County.

Linda Todd “Toddy” Puller entered the General Assembly in 1991 as a delegate, then became a senator representing the 36th district in 1999. She has brought numerous veteran-focused pieces of legislation forward, including special veteran court dockets and last year’s move for two new care centers.

Before McAuliffe’s announcement, Puller said she had no idea her name was going to be on the new facility.

“I’m very proud for it to include my father-in-law and husband,” she said after the ceremony, “not just one Puller.”

In her remarks, Puller said the new veterans care center should help veterans to get to a place where they can find employment and direction in their lives, saving themselves from homelessness.

“The Vietnam era I grew up in was 50 years ago,” Puller said. “I don’t want our country and its people to forget about our veterans ever again. They need to be emulated and copied.”

Del. Mark Sickles (D-43) said the Pullers were “so deserving” of the naming honor. “That family, family, everyone has done so much to promote the military and marine corps in particular. It’s very appropriate.”

The Virginia Department of Veterans Services will manage both new centers, which will each offer services including long- and short-term treatment, physical rehabilitation and other mental health treatment.

Commissioner John L. Newby II from Veterans Services said the total appropriation for the two centers is $96 million, and that the state has already gotten on the list to be reimbursed by the federal government. That isn’t guaranteed, however.

Regardless, American Legion Post 176 member Floyd Cline of Springfield is happy about the new care center. “A lot at our post could use a close by veterans care center,” he said. “With this center, it will be a lot easier.”