Fairfax: ‘Find Your Own Meaning’
Votes

Fairfax: ‘Find Your Own Meaning’ 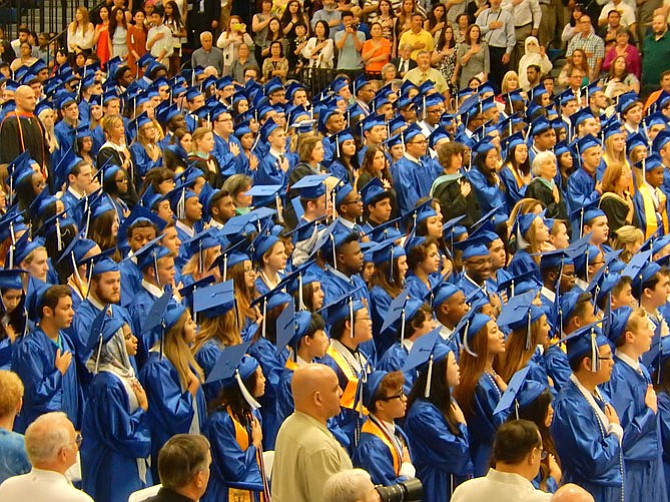 Saying the Pledge of Allegiance at the start of the ceremony. Photo by Bonnie Hobbs.

The graduating seniors of Fairfax High School's Class of 2016.

As Juliana Zamora’s name was read, last Wednesday, June 15, in Fairfax High’s field house, a huge roar erupted from her classmates. That’s because hers was the final diploma awarded – meaning that, within seconds, she and her classmates would become graduates.

Garbed in royal blue caps and gowns, the more than 600 seniors turned their tassels, triumphantly tossed their hats into the air and headed outside, into the world. First, though, came their graduation ceremony and some sage advice from school Principal Dave Goldfarb.

“You’ve been in this field house many times,” he said. “Yet when you leave here today, something different awaits you. The people here – parents, guardians and grandparents – have supported your growth. And they’re here to celebrate this milestone with you and see you take your first steps toward independence.”

Goldfarb then had the students applaud their families, plus their teachers, counselors and other school personnel who saw their potential and were “mentors and role models” to them. He also told them a surplus of information is available to their generation, but they should filter it and its sources and not accept it without full consideration. 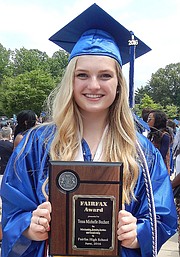 He urged them to: “Consider what you want to be, and what you love and value. These answers are your core values and roots and will shape how you see the world. You see news stories about tragedies and crimes, and it’s hard not to lose your way. And when you’re scared, you tend to not think clearly and be as grounded as you’d like. But bad things don’t happen all the time. People work in soup kitchens and help others every day, and these stories are important, too.”

“As I look at you, the Class of 2016, I see examples of kindness, service, family, courage, inspiration and hope,” continued Goldfarb. “As you establish your identity, take time to ask questions and find your own meaning and what’s important to you. How you see the world is a choice only you can make.

“As you go forward and get older, you’ll change and have different friends and passions. But don’t lose sight of what you [care about] and always keep a stronghold onto who you are and what makes you happy.”

This year, 95 seniors earned a 4.0 GPA to become honor graduates, and speaking on behalf of them was Imogen Hendricks. “Enjoy the present and the process because we haven’t made it, yet,” she told her classmates. “There’s a Japanese saying that ‘Perseverance is power,’ and power is about failing and getting back up, over and over. You square your shoulders and continue to your destination.”

As an oboist, she said, “The importance of perseverance is not lost on me. I wanted to play pretty solos and only did so maybe 10 times, but that’s OK. There are always moments that make everything worthwhile; Class of 2016, this is one of them. Seeing the seas of blue caps and gowns, I think about all our achievements and the rush of adrenaline I’d get performing at halftime, plus supporting our theater department and athletic teams.”

Hendricks is also excited for the opportunities to come, saying, “Anyone with a goal learns to push through obstacles. We’re all recovering from something, in one way or another, and we continue to remember the [Fairfax] Rebels we’ve lost along the way. It’s OK to care and to pause and take care of your body and brain. It’s not giving up; it’s just moving forward a little slower.

“We’re a little scared and the world is big; we have many options. But we’ll take [today] as a moment of rest and celebration so we can take the world by storm. But I encourage you to dance, jump headfirst into something, tell people you love them and take time to breathe. We control our futures; we are strong and we’ve made it this far – we have persevered.” 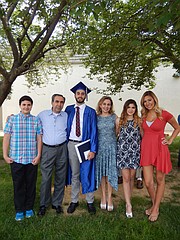 Hendricks then listed three things they’ve learned in high school: “1. There’s nothing wrong with coming in second; there’s pride in finishing, at all; 2. We can cope and let obstacles roll off our backs; and 3. We’re not finished; we’re just beginning, and that’s terrific.”

Next came the presentation of four awards. The Senior Award, given to the senior best representing that class, went to Mike Breslin. He was captain of the football, swim and lacrosse teams, plus editor-in-chief of the school paper, the Rebel Roar. In addition, he tutored his teammates.

City Mayor Scott Silverthorne, Fairfax High Class of ’84, then presented three other awards. Christine Faunce received the Service Award. She was drum major in the school band this year and, said Silverthorne, “She’ll bring her drive and excellence to Virginia Tech.”

The Faculty Award went to Hannah Hipolito, who helped the Korean Club grow and raised money for the Red Cross to help natural disaster victims worldwide. And Tessa Bechert received the Fairfax Award. She was in leadership class for three years, was on the varsity field hockey, lacrosse and indoor track teams and was class president in ninth, 10th and 12th grades.

Then came the awarding of the diplomas, followed by cheers and hugs – and just like that, the seniors became graduates.