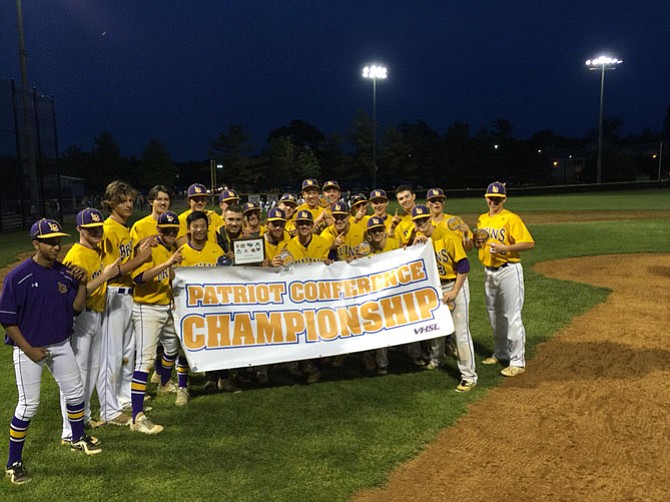 The Lake Braddock baseball team won the Conference 7 championship on May 20. Photo by Aaron Lundmark

Redemption had never felt so sweet for the Lake Braddock Bruins.

After falling to West Springfield twice earlier this season, the Bruins were fueled by a five-run top of the third and a dominant three-hit shutout by pitcher Peyton Bishop and secured the Conference 7 championship with an 8-0 victory on Friday night at Tugwell Yards.

“They were just tougher than us the first two games,” Lake Braddock head coach Jody Rutherford said after the game. “That wasn’t the case tonight.”

Toughness might have been the key early on, as both teams went down pretty quietly through the first two innings. Then Lake Braddock struck in the top of the third inning.

After a leadoff walk to Justin Luedecking, second baseman Ryan Baker reached on a bunt single. The next batter was Ethan Rolland, who hit a comebacker to starting pitcher Jacob Kisner, but reached on an errant throw that pulled the first baseman off the bag, leaving the bases loaded with nobody out.

The next batter was Nate Contrino, who delivered a two-run single to left field, putting the Bruins ahead 2-0. Following that, Matt Thomas would add another two-run single, and Ryan Tobin would add a sacrifice fly to make it 5-0 after three innings. That would prove to be all the run support Bruin starter Bishop would need.

“He changes speeds and he pounds the strike zone,” Rutherford said. “He has confidence in his defense behind him and he never gets raddled on the mound.”

BISHOP threw a complete game shutout, allowing just three hits to go along with three strikeouts and only one walk.

“He just battled out there tonight,” said Bruin catcher and Conference 7 player of the year Logan Driscoll. “He threw all of his pitches right where I wanted them, it was unbelievable.”

West Springfield looked like it was about to answer in the bottom half of the third. After a two-out walk and the Spartans’ first hit by Matt Stallings, Brendan Fletcher roped a line drive but right at the right fielder Luedecking to end the threat.

What was the major difference in this game compared to the first two meetings that the Spartans won?

“Well, the first two games were tight, one play here or there, they could have gone either way,” said West Springfield head coach Jason Olms. “Tonight we made some defensive mistakes early whereas they didn’t and we just didn’t come out ready to play like they did.”

“The first two times we played them we kind of gave the games away by playing timid,” said winning pitcher Bishop, “but tonight we were real aggressive against their pitcher and made great plays defensively.”

In the fourth inning, the Bruins were able to add two more runs off the bat of Driscoll as he delivered an RBI single to make it 6-0. Driscoll went 2 for 3 with two RBIs and an intentional walk.

The Spartans just couldn’t get anything going on offense. Any time they had runners on, the Bruin defense made a play to get them out of the inning.

LAKE BRADDOCK added on two more runs in the sixth inning without the help of a hit to make its lead 8-0. Bishop got the final out of the game on a groundout in the seventh, which ignited the celebration.

Despite the loss, Olms didn’t seem too concerned about getting the Spartans ready to play next week.

“A lot of teams aren’t playing anymore and we’re still going, but we have a long way to go,” he said. “We have a home game on Wednesday and we know that’s the main thing you want going into a region tournament because once you’re in the dance, you’re in the dance and anything can happen.”

Kisner took the loss for West Springfield, allowing five earned runs on six hits while striking out one and walking two.

West Springfield will host Westfield at 7 p.m. tonight in the opening round of the 6A North region tournament. Lake Braddock will host Robinson at 7 p.m..

“It’s tough. It’s going to hurt and we’re going to be upset about it tonight,” said Olms, “but I told them let it sink in and then tomorrow forget about it and come in ready because we still have some work to do.”