Centreville: ‘A Great Resource in our Community’
Votes

Centreville: ‘A Great Resource in our Community’ 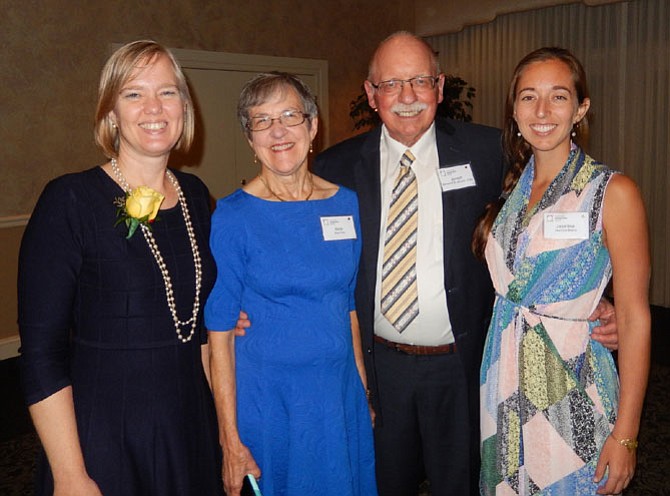 From left are Walter Tejada, Kathy Smith and Alice Foltz. 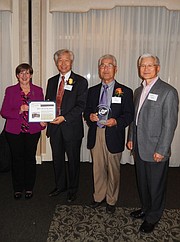 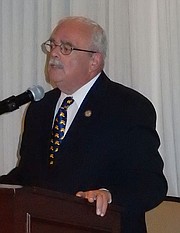 The Centreville Immigration Forum (CIF) is dedicated to helping local immigrants find work and better their lives. So it was fitting that the theme for its second annual dinner was “Celebrating Our Global Community.”

Held Sept. 30 at the International Country Club in Chantilly, the event honored particular people who’ve come here from different parts of the world and contributed significantly to improving the lives of others in Northern Virginia.

“In December, we’ll celebrate five years,” said CIF Executive Director Terry Angelotti. “I’m sure a lot of people didn’t think we’d last this long. But as we look to the future, there are many things to celebrate.”

The CIF runs the Centreville Labor Resource Center, which connects immigrants to jobs and makes sure they get paid. And new CLRC Director Jasmine Blaine spoke of her plans for a financial-literacy program for the workers to teach them about banking and the importance of having a checking account. She also intends to redesign the center, start a women’s group and work on family literacy.

Supervisor Kathy Smith (D-Sully) praised former Sully Supervisor Michael Frey, who supported establishing a worker center from the very beginning, when it was just a hazy idea. “If it wasn’t for Michael Frey’s stick-to-it-ness and passion, this wouldn’t have happened,” she said. “The CLRC is a great resource in our community.”

She then presented awards from the CIF to the three recipients. The first one went to Walter Tejada, former chairman of the Arlington County Board of Supervisors, in recognition of his “career-long support of justice and opportunities for immigrants.”

During his tenure on the board, from 2003-15, he had community stakeholders address a variety of issues, including affordable housing, civic engagement and volunteerism, community and economic development, education and employment, tenant outreach and empowerment, youth development and nonprofit assistance. He also served six years on the board of directors of the Latino civil rights and advocacy organization, the National Council of La Raza.

Tejada founded and headed statewide organizations devoted to bettering the lives of Latinos. He’s currently president of the Virginia Latino Leaders Council and was recognized by both Gov. Terry McAuliffe and the General Assembly for his public service to the commonwealth.

“It does take a village,” he told the crowd. “The Washington Metropolitan region is successful because it’s so diverse. Our workforce is part of our economy, so what you’re doing at the CIF is critically important. People come from all over the world to make their lives here, and [worker centers] haven’t been handled well in other areas. Thank you for all the caring and rising above the divisiveness with which many people treat this issue.”

So, continued Tejada, “There’s a lot that everyone connected with this center should be proud of. This is what the history of our nation has been – immigrants coming to America to better their lives. Thank you for this award. It’s particularly meaningful to me because I’ve worked with this issue and I believe that immigrants should be treated with dignity and respect and made to feel welcome.”

Honored next was Grace Community Clinic, founded by Korean Central Presbyterian Church (KCPC) leaders to provide free, medical care for people with low incomes and no medical insurance. It’s at 14631 Lee Hwy., No. 313, in Centreville. It opened in October 2013, and five doctors there see 40-50 people a month on Sunday afternoons. Typical patients are immigrants from Latin America, Eastern Europe and the Middle East.

Including the doctors, more than 40 volunteers — such as nurses, receptionists and translators — support the clinic. Besides primary-care consultations, the clinic offers limited referrals to free dental care with a nearby dentist, plus free radiology and lab work via donations from Inova Hospital and Fairfax Radiology. Referrals are also made to specialists who provide low-cost care as needed.

Dr. Tong Park, a neonatologist, started the clinic. He was trained at Seoul National University Medical School in South Korea, followed by fellowships at Johns Hopkins Hospital and the UVA Medical Center.

“It’s an honor to receive this recognition from the CIF,” he said. “Our clinic is totally volunteer-run; our volunteers are all ages and come from everywhere. It’s a blessing to have many volunteers working together. They come from local churches and organizations, but more than 50 percent are from KCPC.”

In the beginning, said Park, 80 percent of Grace’s patients came from the CLRC. “But now, they’re 50 percent, so we get to see people from many, different backgrounds,” he said. “We’d like to expand, possibly to another day and in a location closer to the [CLRC]. Fairfax County is one of the most affluent counties in America, but 10 percent of the population has no health insurance, so there’s a need for our clinic.”

The last recipient, Ibrahim Choudhary, graduated from Westfield High and is a leader of the Ahmadiyya Muslim Youth of Northern Virginia. He’s dedicated himself, and organized other youth, to work for peace, understanding and service to the community.

The Ahmadiyya Muslim Community has a mosque in Chantilly and its motto is “Love for all, hatred for none.” Choudhary and his youth-group members focus on correcting misconceptions about Muslim youth and serving their local communities through projects such as food drives for the poor and the dissemination of flyers bearing messages of peace.

Under Choudhary’s leadership, they’ve volunteered regularly with the Capital Area Food Bank; and this May, they supported Humanity First’s U.S. telethon and helped raise more than $700,000 for a hospital in Pakistan. The youth group also joined with Food Fight and other organizations to assemble 5 million meals to feed more than 14,000 hungry children around the world.

Born in Pakistan, Choudhary immigrated to America in 2006 at age 13. After Westfield, he graduated from GMU and is now an IT manager with the U.S. Department of Labor.

“Being a youth leader for the Ahmadiyya Muslim Community, our goal is to bridge the gaps between communities, learn about each other and have peaceful relationships,” he said. “We do this by getting our youth involved in the community.”

“We promote interfaith dialogue so people will come together,” added Choudhary. “In 2011, on the 10th anniversary of 9/11, we held blood drives across the country to honor the 9/11 victims. Islam teaches peace, and we always want to promote more dialogue and understanding.”

Also at the dinner was Gaston Araoz, U.S. Sen. Tim Kaine’s Northern Virginia representative. He read a letter from Kaine congratulating the CIF on all its accomplishments.

Then U.S. Rep. Gerry Connolly (D-11) came to the podium. “The CIF went from good intentions to good deeds,” he said. “And I salute Michael Frey for the stance he took to support the [labor] center; it wasn’t easy.”

“My grandmother came to this country in 1920 as an 18-year-old, Catholic girl, fleeing persecution in Protestant Northern Ireland,” continued Connolly. “And today, who are we? What are our values? Are we going to welcome immigrants or close our minds and hearts to them? When I see this group, I know which way we’re going. So thank you for being wonderful Americans and doing the right thing.”

Lastly, CIF President Alice Foltz said, “We’re all about volunteering and encouraging people to share their talents and gifts. We also had a lot of people who helped us all at the beginning, and we thank you.”