‘This Is What Keeps Us Going’ in Centreville
Votes

‘This Is What Keeps Us Going’ in Centreville 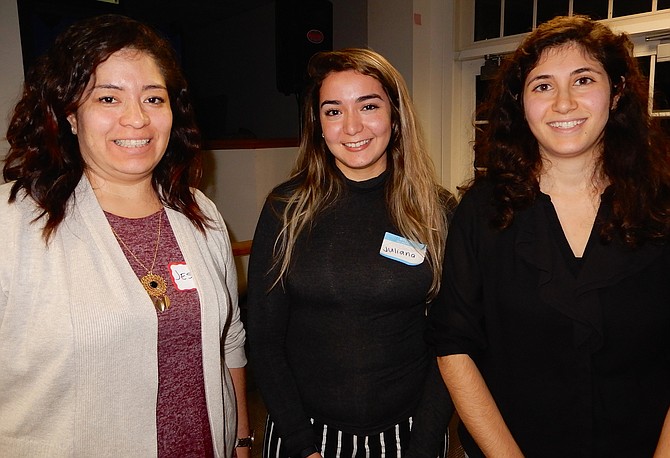 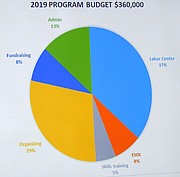 Shortly before the end of the year, the Centreville Immigration Forum (CIF) held its annual meeting, reflecting on the 2018 successes, discussing goals for 2019, electing new board members and honoring two outgoing ones.

Rosemary Flores and Raul Berrios will serve staggered, three-year terms on the board, replacing Ed Duggan and Jim Daniels, who decided to step down. Berrios was unable to attend the meeting, but Bolivian-born Flores addressed those present.

“I’m Latina and have lived in the country for five years,” she said. “I live in Centreville and used to see the immigrants standing outside the library” [seeking work, before the CIF started the Centreville Labor Resource Center (CLRC)]. I wanted to help them and that’s why I’m here.”

Besides CIF’s Board of Directors, it also has a Directiva, representing the workers. Comprising the Directiva are Claudia Alvarez, Jorge Castro, Patrona Matom, Rafael De Leon and Francisco De Paz.

“It’s important for us to have strong voices from the community in which we work,” said CIF President Alice Foltz. And, she added, “Volunteers are key to our work. Our small staff couldn’t do everything that needs to be done without our wonderful volunteers.”

Then Executive Director Terry Angelotti reported on the CIF’s progress toward its goals. And Organizer John Cano, manager of the CIF’s Centreville Commission for Labor Justice (CCLJ), told how the group advocates for immigrants at the county, state and federal levels.

“In 2018, we joined the Virginia Coalition for Immigrant Rights,” he said. “We’ve asked [Fairfax County Board of Supervisors Chairman] Sharon Bulova to have the county stop working with ICE, and it did. And in 2019, we’ll be doing more wage-theft forums and be more active in social media. We’ve held Know Your Rights laborers’ forums on wage theft, and we now have a Facebook page and Instagram about how wage theft affects them and the community.”

To aid families, said Labor Center Manager Samantha Zaboli, the CIF started a program called Families Reunite to help recently reunited families who were separated for a long time. It also collected backpacks and school supplies for children separated at the border, plus unaccompanied minors.

“We plan to start our Women’s Group again and hold an event to empower young Latinas,” said Zaboli. “We’re also trying to get feedback from students to see if our ESOL classes have helped them. We hope to start a basic English class for beginners, at night or on the weekend. And we hope Centreville High’s Spanish Honor Society will help our workers with Spanish literacy because not everyone can read and write in Spanish.”

She said 96 percent of employers reported satisfaction with the work done by the CLRC laborers. “We’ve had an increase in both job orders and the number of participants on these jobs,” said Zaboli. “The 2018 hiring rate has gone up by 2 percent, compared to 2017 – which is good, because we have more people participating.”

Foltz said the CIF wants to recruit and nurture new leaders to manage and lead the organization. She hopes that giving them the necessary training will enhance the diversity of the board members and the center and committee leaders. And, she added, “One of our major goals is to include Spanish in everything we do – to include everyone’s ideas and make sure to serve the community well.”

Regarding the CIF’s budget, Angelotti said, “We’re trying to increase our funding from individuals, large businesses and organizations, and faith-based donors. In 2019, we’ve projected to raise $360,000.” On the spending side, she said, the Labor Center comprises 37 percent of the CIF’s expenditures.

As for income, Foltz said the 24 percent of the CIF’s revenues coming from Fairfax County is the most it’s ever received from the county. “It’s from the Consolidated Community Funding pool,” she said. “But this funding is just for two years and is very competitive, so we may not have it in the future. We’re grateful, both for the funding, and for the confidence the county has in us.”

She then recognized several people with volunteer awards for their 2018 service to CIF. First were Daniels and Duggan. Last year, Duggan was CIF vice president and formerly served as treasurer. Daniels was communications chair for seven years and, said Foltz, “He gave CIF the first $100 for its treasury.”

Honored next were Committee Chairs Barb Shaiko and Rosemary Theurer. Shaiko was a four-year board member and its first secretary. She also served on the personnel committee and was instrumental in getting CIF started. Theurer was fundraising chair for three years and came to CIF through the organization, Giving Circle of Hope.

Angelotti recognized Jerry Foltz and John Kennedy. On the finance committee, Foltz was in charge of payroll and deposits. And, said Angelotti, “He gives rides to the workers, plus counseling and moral support to folks going through hard times.” Kennedy was finance committee chair and led CIF through two audits.

Honored next were Juliana Cortes and Jessica Jacobs. Cortes is on the CCLJ team, volunteered at the CIF’s showcase and during Centreville Day and, in her first six months with CIF, she volunteered 70 hours. Jacobs translates at events and board meetings and teaches the Families Reunite program.

Cano recognized CCLJ volunteers Roselliny Chung and Brian Green-Carino. Chung improved the group’s Facebook and Instagram presence and created its flyers. Green-Carino helped the Labor Center approach employers during mediation. Also feted was CLRC member Jorge Castro, described by Cano as “a vital member of the Directiva and one of its most active.”

“We live in a trying time for immigrants and people who care about immigrants,” said Alice Foltz. “We thought, in 2010, we were taking on a formidable task [deciding to open the Labor Center]. But in the last two years, the danger has grown and the threats to immigrants have increased daily.”

So, she said, “In this time of difficulty and pain, the work we do is even more important. And for those of us who participate, our spirits are lifted by the abilities we’ve had to create a welcoming community. This is our vision and what keeps us going.”