Seeing the Childhood of an Iconic Character
Votes

Seeing the Childhood of an Iconic Character 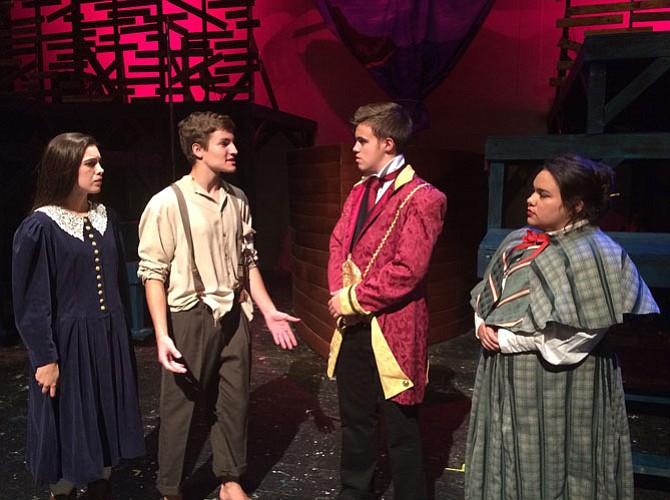 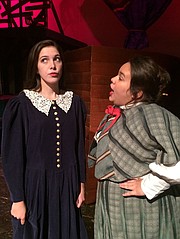 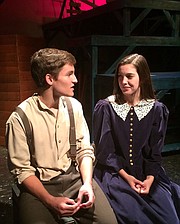 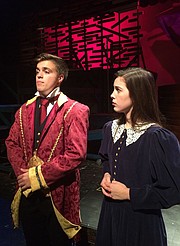 Most people are familiar with the story of “Peter Pan,” but don’t know how he became the boy who never grew up. So Chantilly High is telling his prequel in its upcoming play, “Peter and the Starcatcher.”

Featuring a cast and crew of about 75, it takes the stage Wednesday-Saturday, Oct. 26-29, at 7 p.m., in the school theater. Tickets are $12 at the door or via www.chantillyhsdrama.com.

“It’s a beautiful story with comedic elements,” said Director Shannon Khatcheressian. “There are laugh-out-loud, hysterical bits and lines; and then, the next moment, there’s a poignant scene, so it’s also dramatic. We’re the first ones to do this show in FCPS. We wanted something different and challenging where the students would have the opportunity to showcase their creativity and imagination.”

“It’s a wonderful play, and I’m very excited about it,” she continued. “I’m also really impressed with both the acting and production aspects. The students’ level of commitment and creativity is remarkable, especially since this show forces them to think outside the box and come up with wonderful ideas on their own.”

Portraying Peter Pan at age 13 is senior Evan Belsky. “He’s cautious of the world and doesn’t like grownups — he feels they abandoned him,” said Belsky. “But he’s got a soft heart and is rambunctious and fun-loving. In the beginning, he’s more reserved; but he eventually opens up to others and becomes more friendly, trusting and comfortable around others.”

Enjoying his role, Belsky said the hardest part is doing his character’s physical stunts, such as crowd-surfing and falling off a platform into “a bunch of people. It’s scary, but exhilarating, and it’s fun to see his character progression throughout the show.” Calling it a very artistic show, he said the audience will like the stunts, humor and costumes. The scenes take place on two ships and an island; and, said Belsky, “The set’s really cool.”

Some of the parts are double-cast, including the role of Molly, also 13; sharing it are Caroline Barnes and senior Shannon Gaskins. “Molly’s a rich girl whose mom died when she was 6,” said Gaskins. “She goes on adventures with her dad and loves being with him and exploring the ship. She’s interested in everything going on, is brave and likes being in charge. Peter intrigues her because she’s never seen a boy like him before who’s adventurous and not snobby.”

Gaskins loves playing Molly because she has many, different characteristics. “She’s loving, curious and fun-seeking,” said Gaskins. “And she knows lots of random facts from her father and shares her knowledge with Peter because she likes him.”

She said the audience will especially like the set, which has many moving platforms, a pole for sliding down and a picnic table that children pretend is a raft. “The story’s about innocent love and having a crush on someone, and this show is really different from any other play we’ve done,” said Gaskins. “There are a lot of stunts and everybody’s doing something onstage all the time.”

Senior Adam LeKang portrays Black Stache, the man who later becomes Capt. Hook. “He’s a pirate whose lifelong goal is to become the ultimate villain,” said LeKang. “But he doesn’t have a hero to fight him, so he’s searching for one. He’s a poet who loves words, and he’s energetic with a bipolar personality. He can be happy, one moment, and shouting the next.”

LaKang says it’s one of the most fun roles he’s ever played at Chantilly “because of how eloquent Stache tries to be as a pirate, so he’s ironic. He’s also the only character able to transcend the time period and make references to modern-day pop stars, cars and events.”

The play even has a couple songs in it, including “Swim On” which, said LeKang, “encapsulates the show’s theme, to keep pushing and moving. I sing it with the whole cast while a storm is raging.” He said the audience will appreciate how “smart, well-written, unique and fresh” this show is. “It won Best Play on Broadway in 2011,” said LeKang. “And any Peter Pan fan will love it.”

Playing Mrs. Bumbrake, Molly’s nanny, are seniors Adrianna Castillo and Sydney Kendrick. “She raised Molly after her mom passed away,” said Kendrick. “She’s an older lady, but is funny and flirty and likes to have a good time. She takes care of Molly on one ship while her father’s on another. I’m playing someone who’s had a lot more life experience than I have, so it’s challenging, but fun. And her British accent brings everything together.”

Kendrick said the show’s visually engaging, with a different concept telling about Peter Pan’s childhood “and the sadness behind the happy figure we know. We’re doing it as more of a story than a normal play. And the actors aren’t just the characters performing a show; we’re also narrators talking to the audience. It’s for all ages — everybody will find something to like.”

Since Peter Pan’s story revolves around eternal childhood, it’s represented by the set of a broken-down, pirate-ship playground. “The story of how he came to be is sad and filled with struggle, so we distressed and aged the playground to show those battle wounds,” said Khatcheressian. “The audience must use their imagination and isn’t spoon-fed [what’s happening] through the set and costumes.”

So, she said, “We take childhood toys and games and use them as props. For example, a jump rope can be used for Double Dutch, one moment, and to simulate waves, the next. The actors are playing make-believe and, at times, are playing themselves; and everyone has a multitude of different characters and activities in the show.”

All in all, said Khatcheressian, “This is an amazing story for the entire family. Everyone knows and loves the story of Peter Pan; so to follow this boy’s journey and see how he becomes this iconic character is magical. And we invite the audience to use their childlike imaginations right along with us.”