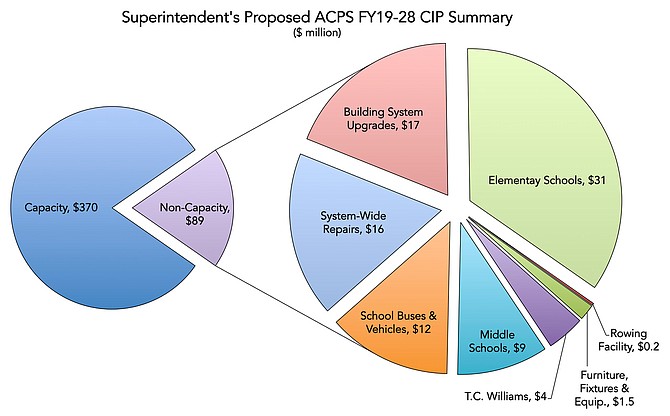 Non-capacity projects do not add new seats. Rather, they largely “address deferred modernizations” of existing schools that are up to 95 years old and “have outdated systems that are increasingly harder to repair,” said Berlin. Non-capacity projects account for $89 million (19 percent) of the CIP proposal and were the subject of the School Board’s second CIP work session, Thursday, Dec. 7.

Responding to a question from School Board member Karen Graf about establishing rhythms for such upkeep, Berlin said, “We used to be on a 7-year cycle. A school knew that it was going to get completely painted, new floors, new furniture every 7 years. And we need to get back to that. I don’t think that this [budget] reflects that exactly; but that is what we need to get back to.” Berlin has proposed a system-wide exterior and interior painting schedule, and shortly will also propose a flooring schedule.

School Board member Hal Cardwell asked why the CIP proposal doesn’t include repairs and maintenance in the next 10 years for the recently acquired West End school building. Jackson responded that an engineering assessment indicated no major mechanical problems in the next 5 years. He added that the roof and garage, though no problems are currently evident, warrant additional scrutiny.

School system budget documents are available at www.acps.k12.va.us/budgets. Subsequent CIP work sessions will occur Dec. 19 and Jan. 3, culminating in final adoption Jan. 11. All meetings are open to the public, as well as recorded for online viewing.