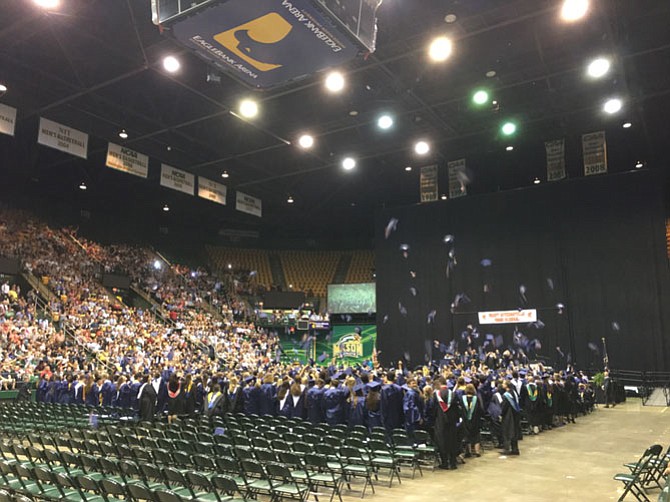 The now graduated Spartans throw their caps into the air.

By By Alex Pena

Students walk across the stage to receive their diplomas.

watched the West Springfield High School (WSHS) graduating class proceed in to the tune of “Pomp and Circumstance,” played by the WSHS Band.

After a rendition of the National Anthem by the WSHS Madrigals, Senior Class President Joe Gumpf took the stage to greet those in attendance and reflected on the history of the school as the class of 2017 will be the 50th graduating class.

“The phrase ‘Spartan Strong’ is not just a clever phrase we put on t-shirts, but two words that every Spartan stands and lives by,” Gumpf said. “It is a way of life that we become accustomed to during our four years at this school that symbolizes wherever you go, West Springfield will always be a place you can call home.”

After Gumpf, Senior Class Officer Sophie Shidlovsky introduced Principal Mike Mukai. She described him as having high energy and someone who brought maximum effort to ensure the success of students.

Mukai called for a moment of silence for the students who had passed before they could make it to graduation. A reflective quiet fell amongst those in the stadium, and then Mukai went on to recognize and express gratitude for alumni, teachers, and parents.

Mukai spoke about how even though his three years as principal of West Springfield have seemed short, the 18 years parents have gone through with their children up until this point went by in the blink of an eye.

Mukai then asked students to indulge them and their parents one more time, as the principals of all the feeder schools read them a story, “Yay, You!” by Sandra Boynton.

Both the Spartan Award and the Faculty Awards were presented by the principal, the former going to Sophie Shidlovsky and the latter going to Costanza Hasselmann. The Bonnie E. Lilly Award was also given out to Colleen Dewing

They keynote speaker was West Springfield’s own Duke Baird, a math teacher for 16 years who was also involved in the track and field team and girl’s tennis. Initially, Baird seem to be giving a cynically realistic speech. He discussed how some have not been as successful as others, and how going forward many more challenges will present themselves. But he quickly turned that callous build-up around.

Shortly after Baird’s speech ended, the class of 2017 made their way across the stage one by one as families all over the arena could be heard cheering when their child’s name was called. Once all the diplomas were handed out, these Spartans stood together one last time to turn their tassels and fill the arena with flying blue caps.