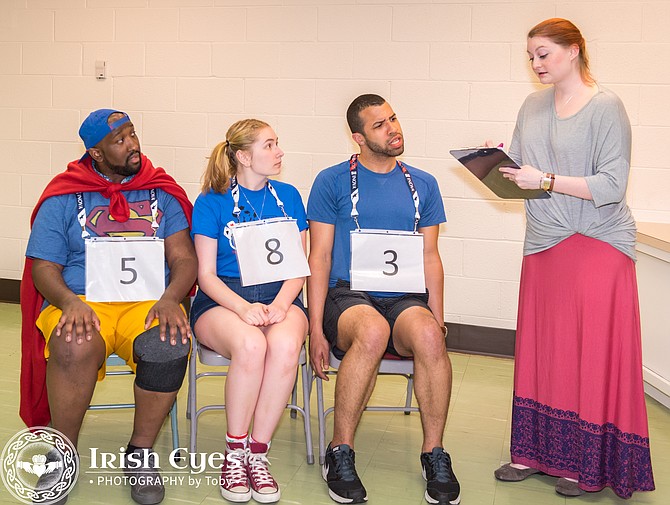 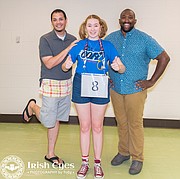 “The 25th Annual Putnam County Spelling Bee” — Logainne (Sierra Hoffman) with her two dads (Chris Gallegos and Sidney Davis), who are eager for her to excel in the bee.

McLean Community Players present “The 25th Annual Putnam County Spelling Bee” at Community Building Ballroom, Vinson Hall, 1735 Kirby Road, McLean. Performances run July 14-30, 2017. Friday and Saturday evenings at 8 p.m. Sunday matinees at 2 p.m. Tickets are $23-$25. Visit www.McLeanPlayers..., or call Brown Paper Tickets at 1-800-838-3006. Group rates are available. Audio description for the visually-impaired will be offered by the Metropolitan Washington Ear at the matinee performance on Sunday, July 23, 2017. NOTE: Adult situations, this show is most suitable for ages 13 and older. Recruiting for audience volunteers to become part of the production process will begin in the lobby at a sign up table. Prior to the start of the show those selected will be interviewed by the producer, director and the actors involved.

Get ready for a chipper musical with great heart. It’s the McLean Community Players (MCP) production of “The 25th Annual Putnam County Spelling Bee.” The show is about “an eclectic mix of quirky characters. Both the ‘kids’ participating in the Bee and the adults in charge of running it have eccentricities that come to seem endearing, as well as hilarious,” said co-director Kevin McCormack.

The “Bee” is set in a fictional Putnam County middle school, but it could be anywhere. There are awkward adolescents (played by adults) trying to win the contest. As they work their way through the competition they begin to develop a sense of belonging.

What is unique about “The 25th Annual Putnam County Spelling Bee” is that at each performance, four audience members will be invited to participate as spellers. They get to go up on stage with its nine member cast and be part of the show. On stage these audience spellers will be given actual words to spell and will remain on stage until they misspell a word. All is for good fun. The Tony Award winning musical has a book by Rachel Sheinkin with score by William Finn.

Sarah Watson plays Rona Lisa Peretti. Peretti is the only female “adult” in the show; and hostess of the event. “For Rona, this ‘Spelling Bee’ is as big as The Oscars or The Olympics. She crosses the days off her calendar until the Bee is finally here. She can’t sleep the night before because she’s so excited. Rona won the 3rd Annual Putnam Spelling Bee. She won’t let the audience forget it.”

Sidney Davis plays Leaf Coneybear; one of the youngest contestants. “He's basically there by default because the actual winners couldn't participate, and that reflects on one of his scenes in the show with his family. He's homeschooled with the rest of his brothers and sisters, so there's a lot of sibling rivalry.”

Sierra Hoffman plays Logainne SchwartzandGrubenierre. She is the daughter of two dads. She is “put under a lot of pressure to succeed. She's a political activist and the youngest competitor at the bee.”

“‘Putnam’ is more than a show about a spelling competition. It delves into friendships, family relationships, the pressure to succeed, sportsmanship, and ultimately, embracing who you are. These are things many of us have faced during our lives,” added co-producers Annie O’Neill Galvin and Diane Sams.