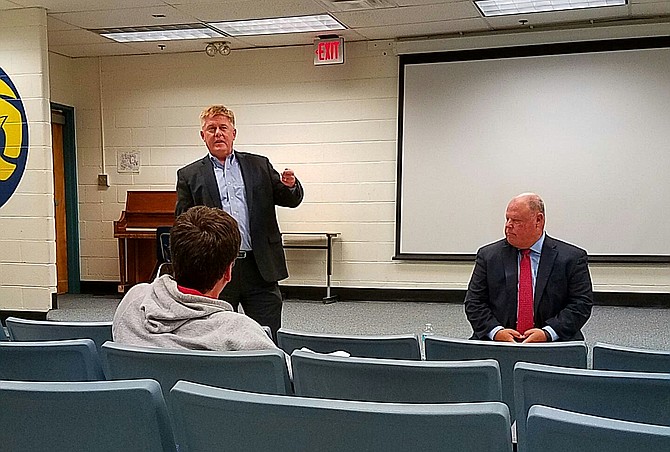 Leading up to the Fairfax County Public School Board presenting its advertised FY2018 budget to the Board of Supervisors Tuesday, April 4, several school board members and supervisors have been hosting community meetings on the subject.

McLaughlin said it was very valuable to have the meetings — discussion at hers lasted three hours — before the three days of public hearings following FCPS presenting its budget to the supervisors.

“So citizens have an understanding of what the school system’s needs are,” said McLaughlin, “as we talk about the revenue challenges that face all county programs.”

As it sits, McLaughlin said, about $48.5 million represents the gap between the $2.8 billion budget FCPS has advertised (an increase of 5.1 percent or $135.1 million over FY2017) and the transfer the supervisors have advertised they can afford.

Since the advertised budget was voted on by the school board in February, they’ve seen $12.5 million in additional revenue, including more funding from the General Assembly, funds from the third quarter carry-over and savings in health care costs.

As McLaughlin and other board members are about two months away from voting on a budget, she said the meetings were also important for hearing feedback from constituents about ways to reduce costs that don’t directly impact the classroom.

“We need to take ownership of what we want,” said Becerra, an FCPS parent who makes regular appearances at FCPS board meetings and many other government events. “As far as a school system, what do we want to have? Is that realistic financially? To get down to what the basic structure of our school system is, we need to evaluate efficiently what’s working.

“For some folks, it was the first time they’d thought about, we can’t afford everything,” Becerra continued. “How to go about affording -- that’s the harder one.”

AMONG THE TOPICS most discussed, she and Becerra said, were potentially dropping fourth grade strings, as well as unknown contracting and consulting costs for specialists from outside the school system.

McLaughlin said she and Mount Vernon representative Karen Corbett Sanders have been trying to get clarity from the FCPS central office on how much these contracts cost the system annually, since last fall.

“What analysis has been done by administration to reduce those costs first? Do we believe as a school system that every single one of those existing costs is mission-critical?” McLaughlin said. “Before we target services that directly impact the classroom… We haven’t gotten a comprehensive answer yet.”

“Citizens expressed the same frustration we have on the board,” Cook said in an email following the meeting. “We have more proposals than we have the ability to fund them.

Cook continued that Fairfax County is being increasingly bound by Virginia law and policies that fail to address current issues adequately.

“Our citizens seem to appreciate the limits provided by an economy that is not growing sufficiently,” Cook said.

FOR MORE INFORMATION on the public hearings on budget at the Board of Supervisors or to sign up to speak at one of the hearings, click here. Hearings are scheduled for Tuesday April 4 at 4 p.m., April 5 at 1 p.m. and April 6 at 1 p.m. at the Fairfax County Government Center, located at 12000 Government Center Parkway in Fairfax.