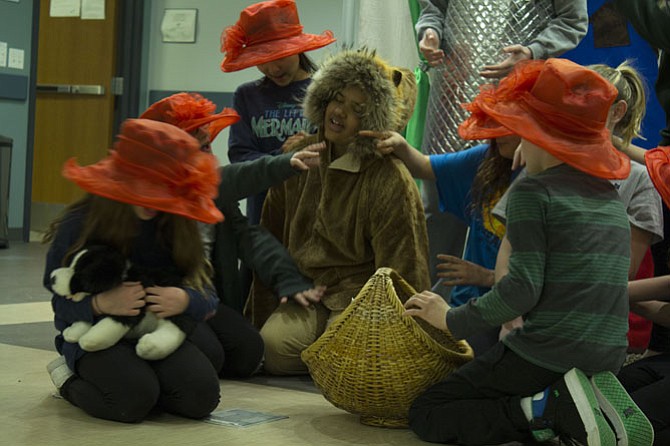 Isabella Jackson of Fairfax, who plays the Lion, falls fast asleep under the spell of the flowers, played by Catie Barry, Brett Beale, Daisy Hamilton, Charlotte Knight and Audrey Zecca.

Both casts opened their shows on Saturday, March 11, at the Latin American

Kassi Elliot, who plays the Scarecrow, talks to the Tin Woodman, played by Alexander Vann of McLean, after she helped oil some of his stuck metal joints.

Youth Center in Riverdale, Md. The kids also toured with their shows, performing for local retirement communities and schools.

The high schoolers performed for Vinson Hall in McLean and the Ring House in Rockville, Md. The younger children performed at the Burgundy Farm Country Day School in Alexandria and the School Without Walls at Francis Stevens in Washington, D.C.

Last weekend, they finished their shows by performing on Sunday, March 19, at the Madeira School in McLean for friends, family and the community.

The Traveling Players Ensemble puts theater programs that last from one week to seven weeks, which range from $475 to $5,100 per student.

More students could participate this winter, thanks to a $25,000 grant the organization received from the Jack Kent Cooke Foundation. The grant helped pay for 20 students from grades 5 through 12 from low- and moderate-income families in the D.C. metro area to participate in its theater programs last summer and this winter.

“While an individual scholarship is not a great deal of money, it can fund a transformative experience for students whose parents can't afford to send them to a theater camp,” Harrison said. “Several of the kids who are in these shows are actually on scholarship.”

More than $3,500 of scholarship monies were awarded to cast members of the shows.

Arts enrichment is happening outside of school more and more as school budgets are cut or decreased, according to Harrison, who said her organization is a way for more kids to participate in private programs, even if they don’t have the financial means.

Even if schools have drama programs, it may be hard to get cast without the training these types of camps provide.

“This is a way to increase and deepen their skills so that when they do go into their school auditions, they’re able to benefit from the public system that actually does exist,” Harrison said.

The Traveling Ensemble Players has more spots and more scholarship money to provide for its next summer program.

“We have not yet expensed out all of our scholarship for this summer,” Harrison said.

The scholarship priority deadline is April 15.