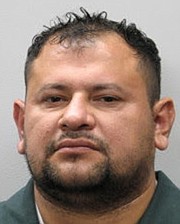 When Fairfax County police originally arrested Vidal Flores Cuchillas, they charged him with malicious wounding in connection with a fatal stabbing outside a Centreville sports bar. But after the victim died, he was charged with murder.

The tragedy occurred Nov. 4, shortly after 2 a.m., in the parking lot of Velocity 5 in the Trinity Centre off Route 29. The restaurant had been closed for about 40 minutes when staff closing up heard a fight at the far end of the parking lot and contacted police.

Ultimately, one man died and another was injured. Responding officers found Centreville resident Harold Garnett, 27, with stab wounds to his upper body. He was rushed to the hospital and later died there. Meanwhile, K-9 units searched for the alleged perpetrator and found Flores Cuchillas, 38, of Centreville, hiding in some nearby bushes.

Police arrested him and took him to the Adult Detention Center, where he’s being held without bond. Garnett was rushed to the hospital in critical condition and was initially expected to survive. But his condition worsened throughout the day and he was pronounced dead that evening. So last Thursday, Nov. 9, police re-booked Flores Cuchillas on a charge of second-degree murder. He has a Jan. 24, 2018 court date.

In addition, police are looking for two, additional suspects because a 26-year-old man was assaulted, as well, during the fight. He sustained minor injuries, and police say Flores Cuchillas and two Hispanic men in their 20s may have been the ones responsible.

Furthermore, authorities believe up to 50 people witnessed both incidents and they’re hoping to speak to as many of them as possible. Detectives also continue to investigate what led to the fight resulting in Garnett’s death.

Anyone with any information is urged to contact Detective John Vickery at 703-246-7865. No matter how minor a detail may seem, it could be just what detectives need to piece together what happened or lead to the identities of the two outstanding suspects.

Tips may also be submitted anonymously through Crime Solvers via www.fairfaxcrimesolvers.org, or text-a-tip by texting “TIP187” plus the message to CRIMES (274637). Anonymous tipsters are eligible for cash rewards of $100 to $1,000 if their information leads to an arrest.