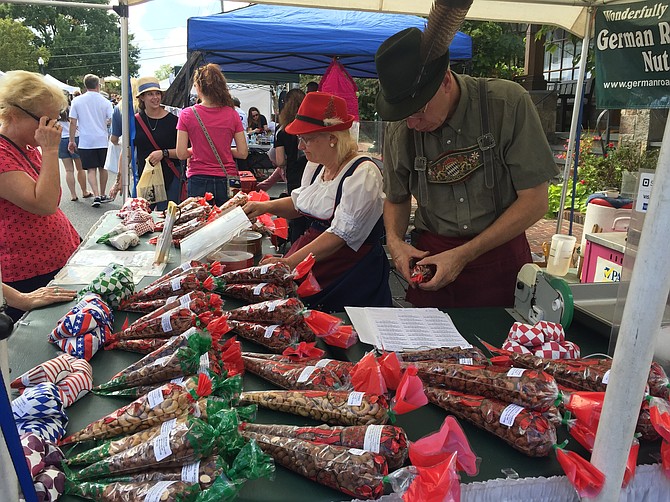 Area musicians Robin, Peter and “Eyes” perform some classic rock with their band the Rockits.

Kids and parents dance to the polka music played by the Sextons Band of Rockville.

With men clad in lederhosen and women in Dirndl dresses, this year’s Vienna Oktoberfest kicked off without a hitch. Bands like the Sextons and the Rockits performed everything from classic polka to classic rock. Warm sunny weather in October was also the perfect setting for the fun family event.

Like the original Oktoberfest held in Germany beer lines and food lines stretched down Church Street. The event brought people from all over Virginia and some from even further. Van Housser of Sicily, Italy tended the grill marinating chicken and beef at the Kitchen House Eatery food truck. More than one stand sold bratwurst and German beers like Fat Tire. David Hughes and his wife Rose came down from Frederick, Md. with their hand-made roasted nuts that were melted in vanilla and cinnamon.

There were tons of fun for the rest of the family including an entire section of children’s activities. On the green stage, Renyall Lee of Reston counted off beats of eight while teaching children new dance moves with the Adrenaline Dance Studio. Children who really wanted to tire themselves out could run around with a bungee cord attached to themselves. Other events included the Chicken Dance contest, moon bounce and Hula Hooping Heather.

Parents could also enjoy their time in the sun as well with back massages and wine tastings. The classic cars lot was filled with new and old cars alike. The Porsche 356s and Fiats were some of those on display. The Vienna Fire Department even brought down one of their antique fire engines for people to pose in front of. Adam Croswell of Mclean who had his children pretend to drive the engine said it was a great event for his whole family.