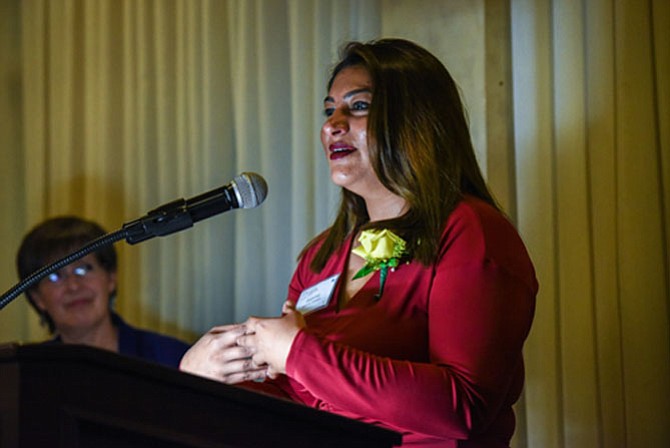 Accepting for Kofi Dennis was his daughter, Araba Dennis.

About 110 people, including local politicians and VIPs, attended the third annual Centreville Immigration Forum (CIF) Dinner on Friday, Sept. 22, at the International Country Club in Chantilly. While guests dined on beef, salmon, or veggie ravioli, and drank from an open bar, the evening celebrated three individuals who have made contributions to the immigrant community.

The honorees included Kofi Dennis, a Ghanaian teacher and drummer; Diana Katz, who leads a host of local philanthropies and nonprofits, including Giving Circle of Hope, NOVIE, Fairfax Rides, and Computer Core; and Mukit Hossain (now deceased), who was a telecommunications executive, philanthropist, and political activist. Walter Tejada, former chair of the Arlington County Board of Supervisors, served as master of ceremonies for the evening.

Dennis has been a master teaching artist with Wolf Trap Institute for Early Learning through Arts since 1998, and he has traveled and performed internationally as well as in the U.S., sharing his skills in drumming and storytelling with children and adults. He performs with the duo “Anansegromma,” and teaches traditional djembe drumming. He has also brought drumming and storytelling to juveniles and prisoners in area county jails.

After coming from Puerto Rico, Katz has worked to help improve the lives of people in the community. She is a founder of the Giving Circle of Hope Foundation and Empowered Women International. She was the driving force behind NOVA Rides that provides transportation for the elderly, and has recently begun the Latino Engagement and Achievement Fund. She is operations manager for Computer Core.

Hossain (posthumous award) was a telecommunications executive in Northern Virginia and, after the Sept. 11 attacks, he urged Muslims to become more engaged in community service. He modeled this by working with Jewish and other faith groups on a variety of causes, including organizing food and clothing drives for the poor in Herndon, and using his organizing and analytical skills to speak out for day laborers. He was a strong advocate for the Herndon Center (the HOW Center), and advocated for immigrants in Loudoun and Prince William counties. He provided expertise for Centreville Immigration Forum during its beginning.

Katz said: "I am thrilled because this is the first time that I get an award that is for me personally as opposed to my group, which is the Giving Circle of Hope. And also to get it from these people who are doing such amazing work with the most vulnerable of our citizens and noncitizens. So this is a really lovely and touching honor for me."

Jerry Foltz, assistant treasurer of CIF, who retired from Wellspring United Church of Christ, said: "I am so happy to honor the memory of Mukit Hossain and his work in establishing a labor resource center in Herndon, which we modeled ours after originally. He set a style of operating which we really appreciate, and I'm glad we could honor him posthumously tonight."

Speaking on Dennis' behalf, his daughter Araba Dennis added: "Immigrants and children of immigrants are just as American as anyone born here."

According to Alice Foltz, president of the CIF Board, "What we're doing tonight is honoring some immigrants who themselves have reached out and helped others. And I think that it's wonderful to be reminded that immigrants make big contributions to our community in so many ways."

"Our vision is a community that's inclusive of all immigrants. We work to provide programs that allow immigrants to emigrate into the community and allow people to build bridges across cultural and economic divides," added Terry Angelotti, executive director of CIF.

State Sen. George Barker (D-39) added: "The CIF has been a very valuable entity in the Centreville area, helping to provide structure when there were problems before, and helping the community in terms of being able to deal with the employment situation there. And it's been phenomenal in meeting community needs and doing it in a responsible way."

Karen Keys Gamarra, School Board at-large representative, said: "This organization means so much to our community in supporting our immigrant residents who are contributing in a positive way to our community, and I'm grateful to see this exhibit of the right attitude towards people who come and have helped to make such a positive impact on the community."

Sully District Supervisor Kathy Smith added: "I'm really happy to be here to support the Centreville Immigration Forum. They do a great job bringing our diverse community together and it's really important that they recognize the people that help make us a better community."

GMU Associate Professor Al Fuentes said when CIF formed in 2007, that it was a public forum initiated through Wellspring UCC. "It basically was a grassroots movement and then CIF came about organically," he said. "There were individuals from the Centreville area who came together with a main vision to do the right thing with undocumented immigrants … so now, looking back to those years, the right thing was to build this center and how it continues to bring the community together."

According to Jasmine Garcia, the director of the Labor Resource Center, the CIF has helped to fulfill 1,400 job requests. "We are grateful to our employers for providing fair wages to the employees; they ranged from $13 to $17 per hour with an average job of $15 per hour," she said.

John Cano, community organizer with CIF, added: "The Centreville Immigration Forum is a labor center that's open to everyone regardless of race, ethnicity; and we're here with welcoming arms."