What's Next for the Herndon Downtown?
Votes

What's Next for the Herndon Downtown?

Mayor, Town Council, Comstock and even citizens who filed appeals want the downtown redeveloped, but appeals delay the project. 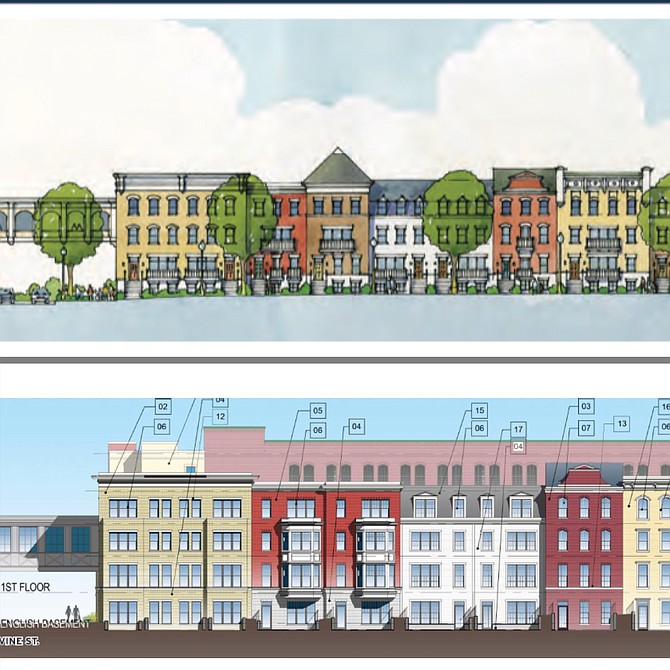 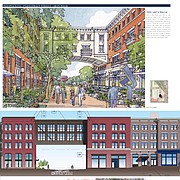 Image of Comstock’s proposed West Elevation of units on Vine Street opposite the Vinehaven community.

”The Town remains in discussion with Comstock, and I am hopeful that we are able to find a pathway forward,” said Lisa C. Merkel, Mayor Town of Herndon “They have indicated a desire to resubmit, and when that happens as always, there will be opportunities for public input."

Recap of Events to Date: On Nov. 1, 2017, the Town of Herndon and Comstock Herndon Venture LLC entered into a Comprehensive Agreement for the Proposed Herndon Downtown Redevelopment Project to be constructed on 4.675 acres in the Historic Downtown District. They submitted renderings of the project as part of their RFP. Proposed design plans dated June 18, 2018, depicted a mixed-use project that includes a public/private parking garage, 274 residential units, 17,000 square feet of retail space and an 18,000-square-foot arts center.

According to the town website, at the Heritage Preservation Review Board Public Hearing on June 18, Comstock's Applications for Certificates of Appropriateness (COA), HPRB #18-15 and HPRB #18-16 for the demolition of the existing buildings located at 770 Elden Street and 750 Center Street respectively and HPRB #18-17 of the exterior architecture of the development received approvals. The board voted 6 to 1.

However, during the Historic Preservation meeting on June 18, although in each of the two Staff Reports related to Comstock's Applications for demolition permits, staff recommended HPRB defer action to give the applicant additional time to address staff comments, HPRB approved them. In addition, as cited in the Staff Report pertaining to Comstock's Application for Certificates of Appropriateness for the new construction of residential units, retail space, arts center and parking garage, Town staff recommended the continuance of the Application to the July 16, 2018 Public Hearing. Staff stated in the report the Board could then, "review the elevation plans, provide comments to the applicant and take into consideration the comments provided by staff prior to approval of this application,"

New Events: In a letter dated July 13 to David Stromberg, Town of Herndon Zoning, Christopher Clements, Manager Comstock Management Service, Comstock Herndon Venture gave notice of the withdrawal of Comstock’s Applications for Certificates of Appropriateness. He thanked members of the Board for their hard work and wrote, “We look forward to presenting this project to the HPRB once again in the near future."

Questions: Why did town staff make recommendations to defer actions on the Applications for the two COA for demolitions and recommend the continuance of the Application for the Certificates of Appropriateness new construction to July 16? On what grounds did citizens file appeals?

Staff Reports: Highlighting the issues as stated in the Staff Report, read by Raymond P. Ocel Jr., Development Program Planner/Deputy Zoning Administrator about the demolition of the building at 750 Center Street during the June 18 HPRB Public Hearing, Ocel expressed the need for sufficient time to address staff comments. He cited time needed to study if the demolition conformed to the criteria of the Herndon Heritage Preservation Handbook and Zoning Ordinance. He cited that the applicant's letter "does not comprehensively address the 10 criteria noted in the Handbook and Zoning Ordinance and those should be addressed in detail for further review by the Board and staff."

Town staff found similar issues related to the Herndon Heritage Preservation Handbook and Zoning Ordinance with the demolition of the building at 750 Elden Street. Ocel's report stated, "The [applicant's] letter does not comprehensively address the 10 criteria noted in the Handbook and Zoning Ordinance and those should be addressed in detail for further review by the Board and staff.

As for conformance with the town's Zoning Ordinance, staff cited 16 items on the report that required further refinement, among them to provide additional storefront detail as some storefronts appeared void of articulation and period-appropriate detailing, and the need to refine the elevation of the Block A building as refinement was needed for the facade and roofline.

During the Comstock’s presentation of the Applications for the COAs, they acknowledged a willingness to work with the Town.

Appeals: Appellants filed their appeals on the following grounds: Developer's adverse impact on traffic in the surrounding area, which is, rated "D' Density that has increased above FAR 0.5-floor which is standard in the "Heritage Preservation Handbook" for new development. Size and massing are inconsistent with color renderings in the downtown Pattern Book which depicts 2 and 3-story buildings. The impacts of overflow parking from apartment owners/guests into the shared parking and onto Center Street

“New construction is predicated on the demolition of 770 Elden Street building whose preservation category and significance were misrepresented to the public and HPRB. ..."

“Town officials made the presentation to HPRB in the Town of Herndon, which owns the property. Undue influence on HPRB occurred as a 'cheat sheet' was given to the HPRB board members that would help them easily identify adopted policy. There was no marketing study provided to support the number of apartments.”

Quotes: “We support and seek redevelopment in downtown Herndon that is compatible with the Herndon Historic District, neighboring homes, and is more in line with the renderings in both the Downtown Pattern Book and Comstock’s redevelopment proposal. We look forward to having our concerns addressed and, if the project proceeds, working collectively with the Town and Comstock to bring the project to the finish line.” - Appellants

"During my tenure on the town council, my primary goal has been to see downtown redevelopment finally happen for Herndon. The plans that were submitted by Comstock are in line with the parameters set out by the Town; the density and scope of the project have not changed. The Town remains in discussion with Comstock, and I am hopeful that we are able to find a pathway forward. They have indicated a desire to resubmit, and when that happens as always, there will be opportunities for public input." - Lisa C. Merkel, Mayor Town of Herndon

"The town continues discussion with Comstock regarding moving forward on the redevelopment project.” -Town of Herndon

Mike McFarlane, HPRB member (voted against approving the COAs): “I’ve been open-minded until literally this evening … But I’m just going to read from the Town Ordinance section 78.5.14 section 2 [current code is 78-60.3(f)(1)] new construction. It says: A Certificate of Appropriateness for new construction of a building or structure may be approved only after considering the following standards as well as other appropriate matters: ‘a) Whether or not the design will be architecturally compatible with the historic landmarks, buildings, and structures in the Heritage Preservation Overlay District in terms of size, scale, color, material, and character.’ That’s in the ordinance. And I just don't think this development does it.”

“It may end up being good, but I think we are the Heritage Preservation Review Board. And Mr. Chairman, you’ve mentioned before the aptly named, ‘Heritage Preservation.’ I think this is going to change the town dramatically, in more ways than just having a giant Reston Town Center-type building here… Well, this is Old Town Herndon, warts and all. It’s a different place, and we’ve adopted a Heritage Preservation District to follow that.”

Comstock did not reply to emails or calls.