HPRB approves Certificates of Appropriateness to demolish buildings and construct structures and plazas. 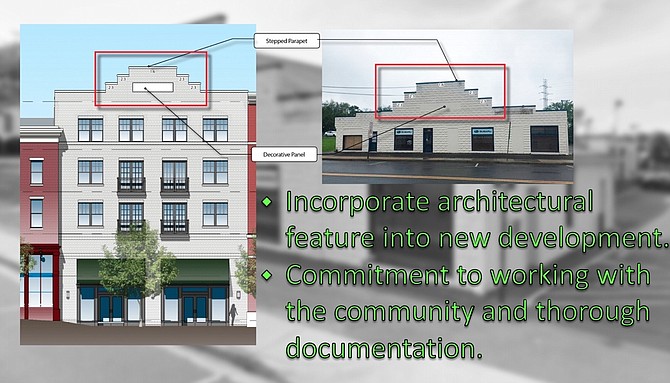 Photo contributed via PowerPoint by Comstock

Photo contributed via PowerPoint by Comstock

The Herndon Downtown Redevelopment Project by Comstock Herndon Venture LC reached a key milestone May 15. The Heritage Preservation Review Board considered and unanimously approved all three Applications for Certificates of Appropriateness (COA) necessary for the project to move forward. The Board approved Applications for COAs for demolition of a non-contributing structure and site features at 750 Center Street, "ArtSpace Herndon;" demolition of a historic contributing structure, non-contributing structure and site features at 770 Elden Street, "the former Subaru Building;" and construction of new structures and plazas in connection with the planned redevelopment in Downtown Herndon. The redevelopment would consist of approximately 210,830 square feet of land owned by the Town of Herndon. The Applicant was Comstock Herndon Venture, LC represented by Noah Klein, Esquire, Odin Feldman & Pittleman, PC.

In his presentation, Community Design Planner Town of Herndon Christopher J. Garcia stated, "This application is being submitted in conjunction with two HPRB cases… currently being brought forward for Board consideration, which are components of a broader effort by the Town of Herndon to realize the community's vision, long-range planning goals, and objectives to further develop a more vibrant mixed-use, mixed-density environment in Downtown Herndon."

Garcia qualified the proposed demolition. "It complies with the town zoning ordinance section," he said. Garcia said that the Downtown Pattern Book showed this location an "opportunity for redevelopment … and it has no priority for preservation." Garcia noted the building was not a historic landmark, did not, among other things, contribute to the overall character of the Heritage Preservation Overlay district and did not qualify as a landmark building or structure in the National Register of Historic Places or the Virginia or landmarks registry. Garcia said the building was of common design and constructed ordinarily, and no significant historical event occurred on site. Garcia added that its removal would not adversely impact the overall historical landmarks in the town's preservation or overlay districts.

Noah Klein with the law firm, Odin Feldman & Pittleman, PC represented the Applicant, Comstock. He echoed Garcia points and added that the building was "identified as an area of opportunity for redevelopment in the Master Plan." The demolition was also assumed in the RFP process, Klein reported. The Board approved the application with the conditions that the interior and exteriors be professionally photographed and the site graded after demolition.

Demolition of existing structures and site features at 770 Elden Street

The Board voted unanimously and approved with conditions the demolition of two other Town-owned buildings, one a "contributing commercial structure…(and a) non-contributing accessory building." Garcia reiterated the demolition would realize planning goals and objectives for a more vibrant downtown.

According to Garcia, although the building was a historical structure, it was of the lowest level, and the site and building investigation submitted by the Applicant identified structural issues that would make restoration or relocation unfeasible. Garcia noted the poor structural condition of the masonry construction throughout the primary structure and cracked and disintegrating masonry on load bearing walls, most notably on the Elden Street side. "There is some risk… of a partial collapse of exterior walls due to the continued deterioration of the masonry facades," he said.

Klein said Comstock was committed to working with the community and it incorporated and "mirrored" the Subaru building's architectural stepped parapet and the color of the building into the new design, significant to some citizens in the town. "We're continuing that commitment to work with the community … identifying materials within the building that might be worth saving," he said.

During the public comment portion, Citizen Barbara Glakas thanked Comstock for including "a visual of what was once there.”

During the board discussion, Mike McFarlane said, "I disagree with a lot of the application in so far as I think there is some town history. It (the Subaru building is) a very important building for our town. This deep parapet is something specific to this type of town … I think if you talked to anybody on the Comstock group, I think they always made a pitch that this building could come down, so I feel that the structure was almost preordained to be demolished to redevelop the downtown.” McFarlane added that unlike the application last year, this one was well documented.

Certificate of Appropriateness of New Construction

HPRB considered and passed unanimously an application for a Certificate of Appropriateness: "…for the construction of new structures and plazas consisting of 273 apartments, associated amenity space, site fixtures, approximately 17,000 square feet of retail and approximately 18,000 square feet of arts-related uses as well as an associated parking garage including private and public parking spaces in connection with the planned redevelopment in downtown," as written in the agenda.

Bryce Perry described the history and the culmination of months and years of planning. Perry recalled how HPRB reviewed the project "…over a dozen public meetings." He shared how the design began with public meetings in 2009, "charrette stakeholder sessions." He explained the culmination of the development and adoption of the Herndon Downtown Master Plan in February 2011, which set the "vision for redevelopment in the downtown and the framework for land uses…The Downtown Pattern Book was created, and the zoning ordinance was amended to implement the principles of the Master Plan…The zoning ordinance includes some dimensional standards and some standards for both building and site design. The Pattern Book provides design guidance to be considered for new construction that includes architectural guidance on form, scale, means of articulation, and building material," Perry said. According to Perry, the design of the new construction was appropriate to the period of significance and met all design guidelines.

From there, the Applicant presented massing diagrams, developed drawings, such as building sections and moving toward architectural forms and how best to break up the mass of the buildings.

Garcia noted that not much changed with the proposed plan since June 2018, except for open space information, the elimination of some uplighting, dividing up the buildings and materials to reduce mass, reducing the visibility of the penthouse elevator, and such.

Neil Klein reviewed the design process. He said that it had been a collaborative effort between Comstock and the Town. He said the application was tailored to Herndon's historic heritage, creating an environment of pedestrian walkways and a sense of place with outdoor seating. "The idea again is to connect, to create a design that connects to the surrounding environment and also honors the historic heritage. I'll just give one example on the arts walk. There will be written, etched into the pavement, a timeline of historic art and historic events.” Klein described the use of the railroad motif that connects to the period of significance and the industrial character of the downtown.

Board member Eric Boll asked, "Is there a plan for, set-asides for affordable housing in the 273 units?

Klein said, "No." The Town of Herndon later said that affordable housing was not part of the RFP presented to Comstock.

During citizens comments, John Boylan, representing the Dulles Chamber of Commerce, said, “The Greater Dulles Region encourages you to approve this. We couldn't be happier with Comstock and what you've done to help the community.” Boylan was one of 16 individuals who spoke in favor of the project.

John Vassallo stated he was not opposed to the development. "I'm opposed to a lot of things in it; a few of the things in it, and the way it got about. You know this whole thing smacks of conflict... Mr. Garcia and the other staff, they've done a lot of work; the Board's done a lot of work…but private. There's been no public involvement with this application…the public can come to the work sessions and sit there.”

For more information on the project, its timeline and what happens next, visit www.herndon-va.gov.