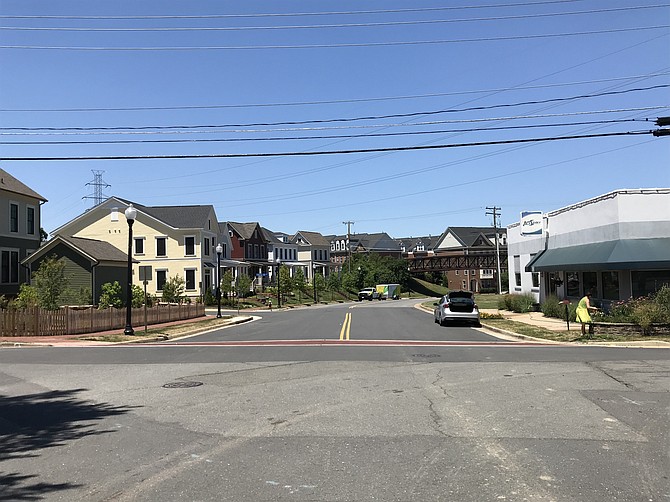 Multiple appeals have been filed by people who have property interests in land abutting or across the street from the proposed Comstock Herndon Venture, LC, Herndon Downtown Redevelopment Project. Photo by Mercia Hobson.

Three written appeals were filed with the Town of Herndon Monday, July 2, by property owners aggrieved by the June 18, 2018, Heritage Preservation Review Board approval of Application for a Certificate of Appropriateness for New Construction, HPRB #18-17.

These individuals have a property interest in land abutting or across the street from the property, which is the subject of the Certificate of Appropriateness, the Downtown Redevelopment Project. The appeals reportedly address the construction of new structures and site features.

The Town of Herndon reports that at the Heritage Preservation Review Board (HPRB) Public Hearing on June 18, 2018, the proposed Redevelopment Project received the necessary certificate approvals, with conditions. First, the approvals of the demolition of the existing buildings located at 770 Elden Street and 750 Center Street, and second the approval of the exterior architecture of the development.

PROPERTY OWNERS FILED their appeals with the Town of Herndon zoning administrator and specified therein grounds for the appeals within required 14 days of the final decision of the Heritage Preservation Review Board on the Certificate of Appropriateness. Those who filed appeals either own properties abutting or live across the street from the 4.675-acre redevelopment site.

As stated in Section 78-60.3 in the Heritage Preservation Overlay district, with appeals, the Certificate of Appropriateness issued by the HPRB on June 18, 2018, to the Applicant, Dave Bryant, PE, Comstock Herndon Venture, LC, is rendered void.

With the Certificate now void, the Town of Herndon Zoning Administrator must schedule a hearing at the earliest possible town council meeting during which the appellants or their agents can state grounds for their appeals and present materials to support them. Town staff can respond or designate another person to do so. Each of the three appeals must be heard.

At the end of the hearing, as stated in Sec. 78-60.3, "the town council may affirm, modify, or reverse the decision of the HPRB, in whole or in part, or may remand the case to the HPRB. The decision shall be based on the standards in section 78-60(f), development within the Historic Preservation Overlay District."

The decision cannot be reversed or modified unless there is evidence in the record that the decision of the HPRB is not correct, based on the review standards for a COA. In determining whether to remand the case back to HPRB, the town council must be guided by, as quoted in Sec. 78-60.3: "the completeness of the record; the appropriateness of further review by the HPRB of certain points or facts; and any amendments to the application after the decision of the HPRB."

In a partial recap of the HPRB June 18 Public Hearing during which the Town of Herndon Staff Report reviewed the Application for the Certificate of Appropriateness for New Construction, HPRB #18-17 to the board, who later voted to approve it in a vote of 6 to 1, the named Applicant is Dave Bryant, PE, Comstock Herndon Venture, LC. The Owner is the Town of Herndon. The Location is 724 Center Street, 726 Center Street, 750 Center Street, 731 Station Street, 770 Elden Street, 782 Elden Street and Vine Street at Washington and Old Dominion (Trail).

In the Staff Report, issues such as conformance with the Herndon Heritage Preservation Handbook, the use of the Downtown Pattern Book to guide the development of the plans for the property and conformance with the Town of Herndon Zoning Ordinance [78-60.3.F.2] were presented by Ocel. He also noted in the report sixteen areas and details that require further refinement to comply with the documents and design drawings.

THE STAFF REPORT read: "Town staff recommends that the Board review the elevation plans, provide comments to the applicant and take into consideration the comments provided by staff prior to approval of this application."

"At this time staff is recommending the continuance of this item to the July 16, 2018, regularly scheduled public hearing," as stated in the Staff Report. HPRB voted 6 to 1 to approve the COA.

The Town of Herndon and Comstock Partners both declined to comment on the appeals.