Squishiness or Flexibility in Alexandria?
Votes

Squishiness or Flexibility in Alexandria?

School Board wrestles with how best its budget should communicate its needs. 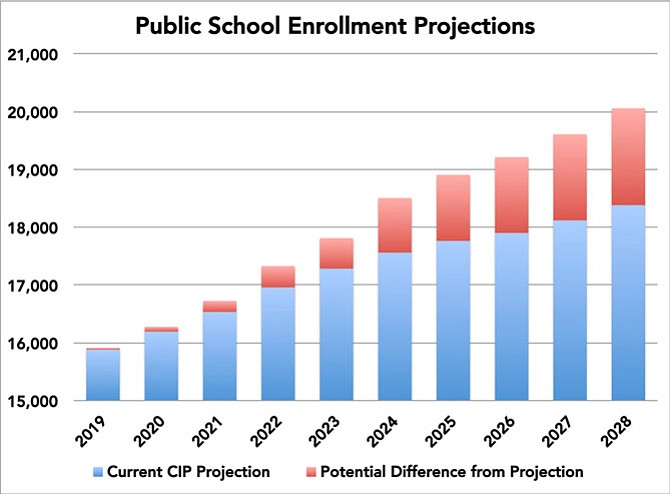 Increasing enrollment drives the need for more schools. That’s the core narrative of the public school system’s 10-year Capital Improvement Program (CIP). Seven years of past forecasts, when compared with actual enrollment, have been, on average, consistently conservative. Karl Moritz, the city’s planning and zoning director, said in an email: “Our forecasts are sufficiently accurate for long range planning. … The go-or-no-go decision on any specific education facility is going to take place about 3 years before construction,” and by that time the forecast “is going to be very good.”

“We want to make sure that you all understand … that this 10-year CIP [leaves] major gaps” in student seating capacity, School Board Chair Ramee Gentry told City Council at a Jan. 29 joint work session.

On the one hand, the School Board knew that when they unanimously adopted their CIP on Jan. 25. The plan deliberately delays and cuts capacity-adding projects, aligning with recent recommendations from a “blue ribbon” advisory task force. Those recommendations were, in part, to accommodate the limited year-by-year funding indicated by the city manager. As a result, the schools’ CIP this year weighs in at $475 million, down from $611 million last year.

On the other hand, the School Board fears giving any impression that this paring back is an acceptable long-term solution. They’ve grappled with how to communicate their students’ full needs, if not through specifically allocated dollars. Ultimately they decided to illustrate unmet needs in the language of their CIP adoption resolution and budget document. This language conveys the expectation that means outside the normal CIP convention — naming projects in specific years with specific dollar amounts — will address unmet needs. These new means, as of yet undeveloped, are also task force recommendations.

One is a joint facilities master planning process between the city and schools. As with the city’s other master plans, this would entail stretching planning and funding considerations beyond the current 10-year timeframe. For example, though the School Board’s present CIP excludes pre-K expansion, their adoption resolution suggests that the new master plan should include it. School Board member Karen Graf says this new master plan “is going to be a key for generations, not just this moment.”

Another unconventional means includes preliminary allocations in FY19 for feasibility studies ($1.4 million) and property acquisition ($30 million). These provisions are unique in that they’re not yet associated with named projects — which projects they become will depend on still unsettled variables. A feasibility study might indicate an already-owned property, or the School Board might acquire a new property, which is suited for one project but not another. These decisions will in turn enable other project’s details to fall in place. Graf hopes to identify “viable properties” before the city’s budget process ends in May.

“Where I think some people are seeing squishiness, I think I’m seeing us being thoughtful, and us recognizing that we don’t want to find ourselves in a position where we’re backing up,” said Gentry. She thinks the School Board’s chosen approach will lend itself to flexibility as complex circumstances evolve.

Other School Board members worried that this approach doesn’t clearly communicate the full magnitude of the schools’ capacity crisis.

Even if the School Board executes all the named projected in its CIP, enrollment forecasts show the seating deficit rising to 2,010 in FY28, up from 1,579 in FY18. The gap could widen further; it won’t likely widen less. Forecasts over the last 7 years, while nearly 100 percent accurate 1-2 years in advance, have, on average, increasingly undershot actual enrollment 3 years in advance and beyond.

School Board member Christopher Lewis said during earlier deliberations: “I get the flexibility point; I’m talking about clarity of thought. … We can either be clear, or we can put out a bunch of vague ideas and say, ‘We’re going to work it out with you, council.’” Past adoption resolutions haven’t included “extensive explanations” about what the CIP doesn’t include. He added later: “This budget does not ask for everything that we need … This philosophy … puts a faith in the City Council that they have not earned after years of kicking the can down the road.” He said he almost voted no because the School Board “didn’t seem to have a focused vision of how to approach making that full ask beyond what’s in this budget. And I think we have work to do there.”

Graf said: Council is “looking for cement out of [the task force’s recommendations],” meaning solidified project sequencing. “We need to somehow deliver that that isn’t necessarily possible. … We have numbers in here and statements in [our CIP], but we know they don’t address the holistic issues. … That’s something we’re going to have to contend with in the wake of the task force’s work.”

School Board member Bill Campbell said: “I just want to make sure we don’t get caught up around anyone thinking that extending to 20 years [i.e., beyond the CIP’s 10-year timeframe] is critical, in terms of diluting things. Because we could do it in 10 years.” Under the current plan, “seating will be worse [in 2028] than it is today.”