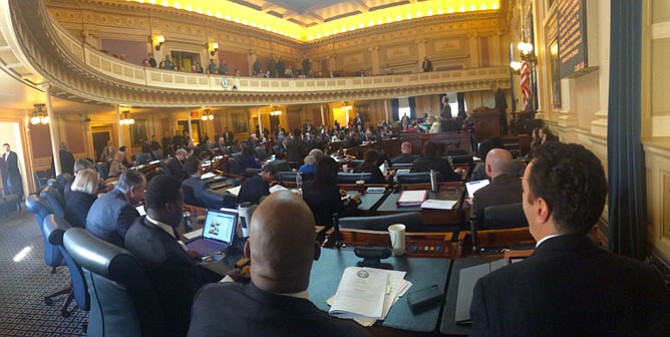 Del. Marcus Simon (D-53), right, has enough seniority to get a better seat in the House of Delegates. But he prefers to sit in a part of the chamber known as Coffin Corner. Photo by Michael Lee Pope. 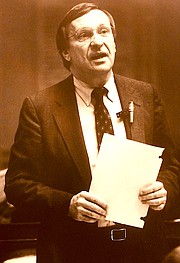 As a freshman delegate in 1978, Ken Plum was assigned a desk in the far corner on the Democratic side of the House of Delegates — seat 17. It wasn’t the best vantage point in the House because about a third of the Republican members were totally out of view. The senior members took the seats at the back of the chamber near the center, sticking Plum in the corner.

“In my very first session on my very first day, Speaker John Warren Cooke said, ‘The speaker recognizes the gentleman from Fairfax, Mr. Plum, for a motion,’” recalled Plum, currently the senior member of the House. “I had no idea what he was doing, but I later learned it was to dispense with the reading of the journal. Everybody laughed their heads off as I was trying to get myself out of it.”

It was a trial-by-fire for the freshman delegate from Reston, who would soon learn that he was occupying a rarified spot on the House floor — Coffin Corner. The term dates to the early 1970s, when a freshman Del. Dickie Cranwell arrived as a freshman Democrat from Roanoke. He created the term to underscore a generational divide in the House of Delegates.

“I would say that we were probably a newer breed of Democrats in Virginia than some of the older guard,” said Cranwell, who later went on to be the Democratic leader before retiring in 2000. “A lot of times there would be close votes and we would carry the day in killing something, and we just decided that we were the corner that was putting a lot of stuff to sleep.”

THE 1970s SAW A MASSIVE SHIFT in Virginia politics, not necessarily from one party to the next, but within the Democratic Party, as young members like Cranwell and Plum were moving the party to the left, away from the conservative racial politics of massive resistance that was the hallmark of the Byrd Machine that ran Virginia politics for half a century.

“We voted pretty much in block, so if there was a tight issue we would have 25 votes,” said Cranwell. “The rest of that group was like throwing a firecracker in a covey of quail, they’d go everywhere.”

The expression Coffin Corner was not just a reference to the ability of the junior lawmakers who sat there to kill a bill they didn’t like. It was also a reference to Cranwell’s time as a punter at Virginia Tech, when he would kick the ball into the Coffin Corner out of bounds and place the opposing team deep into their own territory. The name stuck and the corner of junior seats took on a cache all its own.

“It was considered prestigious and kind of cool to be in the Coffin Corner,” said former House Democratic Caucus Chairman Brian Moran, who chose to sit in the Coffin Corner even though he had enough seniority to get a better seat. "From the perspective of having a good view of the other side of the aisle, it was not the best seat. But it was seen as a corner where you melded freshman and more senior members together.”

“This is where the troublemakers in the House sit."

THESE DAYS, COFFIN CORNER is seeing a new generation taking their seats. The current House of Delegates has about a half dozen millennials who sit in the Coffin Corner, eager to make their mark on history and challenge the status quo. When Republicans criticized an attempt to tax streaming video at the same rate as cable TV, the expression “Netflix and chill” created a generational fault line among House members.

“What drove many of us to run and the high levels of support we receive from our peers across the commonwealth was not casual references to Netflix, which has become disturbingly popular on this floor,” said Schuyler Van Valkenburg (D-72). "We ran on jobs, health care access, education and creating a Virginia that was open and welcome to everybody regardless of race, faith, gender, sexual orientation or county or origin.”

Sitting at far end of Coffin Corner, that seat that Plum was assigned 40 years ago, is Del. Marcus Simon (D-53). He’s been in the House long enough that he could take one of the more senior seats at the center of the chamber. But he chooses to sit in Coffin Corner. He says it’s an ideal location for leading the resistance to the Republicans and sometimes even against his fellow Democrats. Last year, for example, he angered members of both parties by making a parliamentary inquiry about whether a Republican member who was facing domestic violence charges should be voting on changes to the code outlining assault and battery. The Republican leadership retaliated by delaying consideration of all Democratic bills that day.