In the Kitchen in Alexandria: Meet Chef Cruz
Votes

In the Kitchen in Alexandria: Meet Chef Cruz 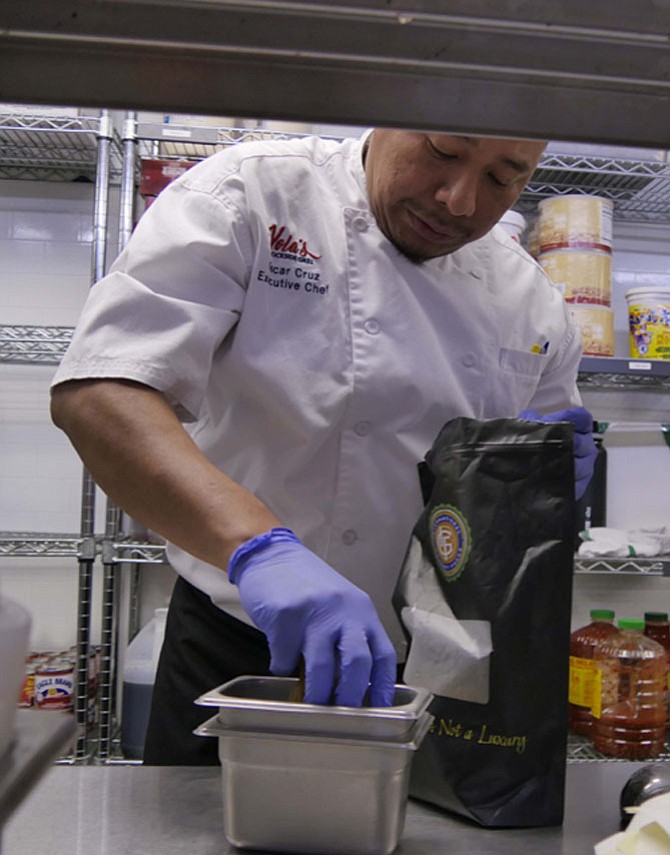 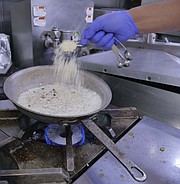 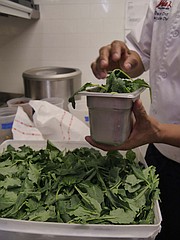 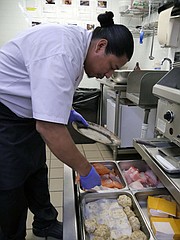 Executive Chef Oscar Cruz gathers a handful of golden raisins. He says, "when you have salmon and something creamy, you need to add a little sweet." Cruz is preparing seared, blackened salmon with barley risotto, a special he just introduced today at Vola's Dockside Grill on Union Street. He says, "I create this recipe. It sells very quickly."

Cruz has precooked 8 ounces of barley for 20 minutes His ingredients are all lined up on the counter mise en place. Cruz heats an aluminum skillet to medium, pours in a half cup of heavy cream and adds the barley risotto. "It will cook for six minutes." He adds the raisins, then sprinkles in the Tablespoon of grated Parmesan. Cruz pinches a little premixed salt and pepper. "People do like salt, especially heavy smokers. But I'd rather add less and let them put on more later if they like.

"I'm going to start the salmon now." Cruz pulls out a large drawer and carefully selects about a 7.5 ounce piece of fresh salmon. He scrapes a metal spatula across the grill to clean it off and places the salmon on the grill. It will take about three minutes on a side. "I like to make it between medium rare and medium."

Cruz keeps an eye on the risotto. As he stirs the risotto, it turns creamy, and he tastes a small spoonful. "Needs a little salt." Cruz heats a small skillet to high and adds a dollop of butter mixed with chopped parsley and garlic. He tosses a handful of baby kale into the skillet and stirs it to coat with the butter. Cruz flips the skillet and tosses the green leaves into the air and then adds them to the risotto.

"Now let's plate it." Cruz pulls out the nicely blackened salmon from under an oval aluminum platter which he had placed over the salmon in the last stage of cooking. "That is to get air all around the salmon so it can cook on all sides."

Cruz spoons out the risotto onto the middle of a large white plate. He arranges the piece of salmon on the top. "Now I'll finish with tartar sauce." Cruz has mixed mayonnaise with lemon juice, capers, chopped shallots and diced cucumber. He spoons a generous helping on top of the salmon. "Now fresh herbs — a mixture of parsley, tarragon and lemon zest. It is ready to go."

Cruz has been at Vola's for two months. His days begin at 7 a.m. and "the time I go, I don't know. It depends on business." Cruz started cooking in Salvador when he studied it in high school. He explains it is not like high school in America. You are required to attend grades 1-9 and then you can choose "from too many types of high school — nursing, mechanics." Cruz chose cooking "because I came from my family farm. We grew everything." He says, "we were very poor, and I saw an opportunity to do something different in my life."

But when he applied for a restaurant, all they had was a dishwasher spot. "In my country if you cook, you cook; if you prep, you prep; if you are a dishwasher, you wash dishes." He took a culinary class for a month and got a job in a real restaurant. "After three years of cooking in my country, I decided to move here. I didn't know anything about kitchens in the U.S." So he worked demolition for six months. "I was feeling like what do I do with my life. I didn't speak English or have any family here or friends.

"I remember the day. It was raining. I was sitting in front of my building at 1 in the afternoon when an old man on a bicycle came by. He asked me what I was doing and I told him 'looking for a job.'" He says the man told him there was a restaurant that just opened up a week ago. So Cruz applied for a job and … "they hired me as a dishwasher. I worked 3 p.m.-3 a.m." But he says the manager saw his potential "and my heart started beating when she asked me to try the salad station one week and then one week on the grill." In America, you can go from dishwasher to executive chef.