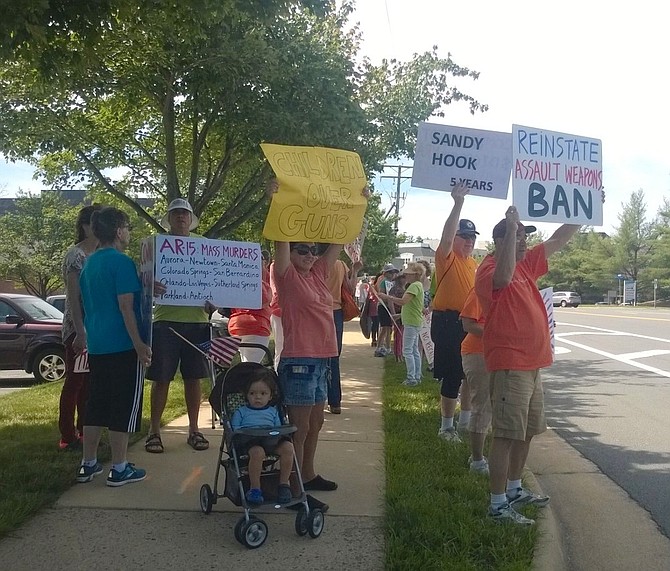 More than 65 activists greet motorists with protest signs Thursday morning, June 14 on their drive past the National Rifle Association headquarters at 11250 Waples Mill Road. Many drivers beep their horns in support. Photo by Marti Moore/The Connection 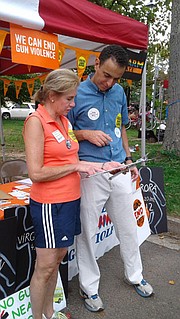 Falls Church activist Carol P. Luten of the Coalition to Stop Gun Violence worked with Del. Marcus B. Simon (D-53) of Fairfax County and the City of Falls Church for two years to create a special license plate that says “Stop Gun Violence.” Virginia motorists can buy the new tag February 2019 at their local DMV office.

A special license plate designed as a “moving billboard from city-to-city and state-to-state to help create awareness and a movement for change” will be produced by the Commonwealth of Virginia Department of Motor Vehicles sometime after July 1. Former Falls Church resident Robin Bray is the professional artist who designed the graphic image of a broken heart held in the palm of a hand.

Although 21-month old Lennon Cox is the youngest activist June 14 at a monthly protest in front of the National Rifle Association in Fairfax, his mom says “he’s pretty experienced” at his fourth appearance on the sidewalk of11250 Waples Mill Road.

Rosa Cox, 40, holds up a yellow protest sign — high enough for motorists to see as they drive past the NRA from Oakton to Fairfax. Her message urges politicians to change their priorities and place “children over guns.”

At 10:47 a.m., a young woman, driving a blue Hyundai sedan along the southbound lane of Waples Mill Road, shows her support of protesters as she beeps her car horn, leans out the window, gestures with a fist pump and exclaims “Yes” as Cox recounts her recent experience with gun violence.

Cox said she and her family witnessed a shooting a few weeks earlier “in front of our own house” in Chantilly.

They were in the garage, when Cox noticed a car pull up along the street. She saw a man exit from the vehicle and start shooting at a neighbor’s house.

“There were two people shooting at each other,” Cox stated. She and her husband ducked for cover. He grabbed their three young children and took them into a room in the back of their home while Cox said she called police.

“No one was hurt,” in the shooting Cox claimed she witnessed. She reported a stray bullet from the gunfire exchange went through the bedroom window of another neighbor’s house. She has a picture on her smartphone of a hole the bullet made through the dresser mirror.

“This was a domestic dispute that affected the whole neighborhood,” Cox declared. “It is very scary.”

ALTHOUGH COX GAVE NO DETAILS at the protest about the date and street address of the crime, the Fairfax County Police Department is investigating a May 17 shooting in Chantilly in the 13000 block of Lynncroft Dr.

No injuries were reported. Investigators did not know by Tuesday, June 19 if the weapon or weapons were purchased legally.

No restraining orders were violated at the time of the shooting, “but an Emergency Protective Order was issued stemming from this event,” Cole said.

Fairfax County General District Court records Tuesday, June 19 show Hughes, a Chantilly resident, was arrested May 21 for both felony shootings. He was arraigned May 22. His bond hearing was held the next day. Hughes remains in custody. A preliminary hearing is scheduled for July 2.

“It shouldn’t be like this,” said Cox, who says she lives in the 10th Congressional District and plans to volunteer in the upcoming midterm election.

“We will be pushing for Wexton,” she states on behalf of her family.

Wexton expressed her sadness June 14 for a whole generation of Americans, who have never known a world without school lockdowns and mass shootings — “a world where kids have to cower behind their back packs.

“We can do so much better,” Wexton said.

Her work was lauded by fellow lawmaker Del. Kenneth R. Plum (D-36) of Reston, who believes sometimes the key to changing policy means changing the people who make the policy, he remarked June 14 before introducing Wexton to the NRA protesters.

Plum credits the 2017 election — in which Democrats statewide picked up 15 seats in the House of Delegates — for bringing change to Richmond at this year’s Virginia General Assembly.

In Wexton’s short time in office, Plum told the crowd “She has done an amazing job of getting legislation passed in a bipartisan setting.” Plum, who has served in the Virginia House of Delegates for more than 30 years, knows convincing people from both parties to come together and pass laws is no easy task.

“It took us over five years to get Medicaid Expansion,” he said. The legislation finally pushed its way through a special session in May to provide affordable healthcare to nearly 400,000 working poor Virginians who don’t qualify for federal subsidies.

“If you can expand Medicaid in Virginia, you can end gun violence as well,” Plum sid. He believes improved access for Virginians to mental health programs is critical to the prevention of gun violence throughout the Commonwealth.

As he and other community activists leave their June watch at 11250 Waples Mill Road., Plum said, “A few more years and a few more elections is what we need to pass common sense gun legislation.”

According to the General Assembly website, Wexton was chief patron this year of a firearms bill — SB 432 — that may help close the gun show loophole by requiring vendors to conduct criminal background checks on the people who buy their firearms. She also sponsored SB 433, a senate bill on the reporting of lost or stolen firearms.

They are two of 70-plus firearms safety bills that died in committee at this year’s Virginia General Assembly.

THE ONLY SURVIVING LAW — HB 287 — made progress June 14, when Falls Church activist Carol P. Luten of the Coalition to Stop Gun Violence delivered 488 paid applications to the Commonwealth of Virginia Department of Motor Vehicles in Richmond for a special license plate that says “Stop Gun Violence.” The ordinary appointment Thursday turned out to be “a significant day without knowing it,” Luten admits June 19 — when she realizes the date marks 5 and a half years to the day of the Sandy Hook Elementary School tragedy.

The bill was sponsored by Del. Marcus B. Simon (D-53) of Fairfax County and the City of Falls Church, approved in March and signed into law in April. Effective July 1, the new law states motorists can purchase a standard $10 tag or a $25 revenue-sharing license plate. The extra $15 will benefit a state fund to help Virginians receive treatment for mental health, developmental and substance abuse issues. The $10 vehicle tag expires July 1, 2020 ― the same day the $25 revenue-sharing plate becomes effective. The Department of Motor Vehicles is budgeted $9,376 for tag production, Simon confirmed in April.

He credits Luten as the “driving force” behind this bill. She started the project two years ago and collected more than the required 450 prepaid applications needed to introduce the legislation at this year’s General Assembly. She said Virginia motorists can buy the tag February 2019 at their local DMV office.

Luten said last fall the license plate is designed as a “moving billboard from city-to-city and state-to-state to help create awareness and a movement for change.”