‘It’s Our Time to Act’ in McLean
Votes

‘It’s Our Time to Act’ in McLean 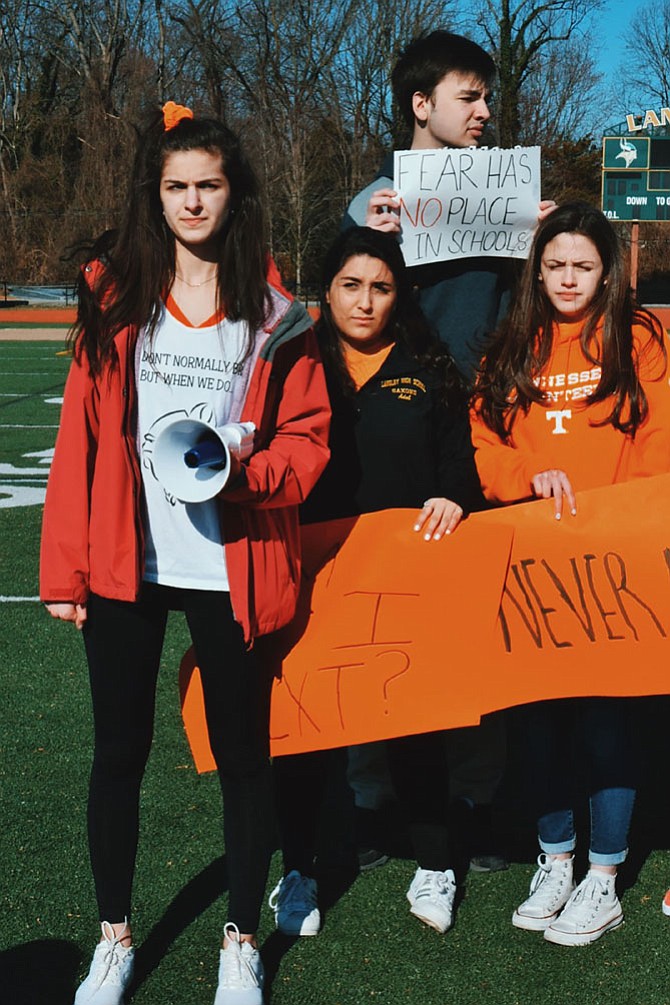 From left, Langley High School walkout co-organizer Alina Ghobadi stands with fellow students Roumina Adab, James Rau and Emily London. Profoundly affected by the school shooting in Parkland, Fla., that saw 17 students lose their lives to a teenaged gunman with an assault rifle, Ghobadi decided it was time to speak out for school safety and sensible gun regulations. Photo by Alex Driscoll 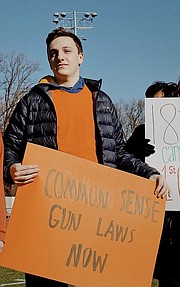 Ben Goodson, a senior at Langley, co-organized the student protest. “It’s time for us to try, to make our voices heard. It’s crazy that nothing has been done, shooting after shooting, death after death.”

One of many signs that students held at the National Walkout to honor the Parkland, Fla. victims, and to advocate for better gun regulations.

Alina Ghobadi and Ben Goodson are both 18-year-old seniors at Langley High School in McLean.

Neither can recall a time “before this, when school safety and lockdowns against possible ‘active shooters’ hadn’t become, at the least, the background [consideration] of a school day,” as Goodson puts it.

“But you always think it can’t happen at your school,” adds Ghobadi.

There have been dozens of violent incidents at schools across the country in recent years, but the latest, where 17 students were killed at Marjory Stoneman Douglas High School in Parkland, Fla. by a former student armed with a semi-automatic weapon, really touched Ghobadi, and she reached out to Goodson for help in “showing our solidarity with Parkland, and making a statement. Enough is enough. It’s our time to act.”

THE TWO, who have known each other since the eighth grade, decided to do their best to galvanize their fellow students into joining the National School Walkout Day on March 14, the one-month anniversary of the Parkland tragedy. They met with teachers and school principal Frederick Amico to discuss their intentions, and while they weren’t given a “free pass” to leave class for the 17-minute protest (one minute for each of the students who were killed), they were not given a categorical denial.

“We were asked to use a study period to avoid disrupting classes,” said Ghobadi, “but we felt it was important to do this at the same time as others around the country. Together, our voices are stronger. If there is a consequence, then I guess we will have to bear it.”

Goodson agreed. “The years go by. More kids are killed. Nothing happens. We have to speak and act together, and then maybe we will be heard and something will be done.”

Neither Ghobadi nor Goodson were impressed with the action taken by the House of Representatives on the same day as the Walkout. By a vote of 407–10, the House passed a “School Safety Bill” that focused on better coordination between schools and law enforcement, and offered funding for training, including of students, in the detection of the early signs of potential violence, as well as for anonymous reporting systems. The bill, which is backed by the National Rifle Association, makes no mention of guns or any type of gun restrictions or regulations. This omission contributes to the resolve of the two high schoolers to speak out.

“It’s ridiculous not to address gun regulation as part of the solution,” insisted Goodson, who also sees the House bill as ignoring the dangers for those of us beyond the campus confines. “We’re not saying that people don’t have the right to have guns for protection or hunting,” said Ghobadi, “but what are you hunting with assault rifles?”

“Exactly,” said Goodson, who upholds the Constitution and its Amendments, but believes that the language of the 2nd Amendment “doesn’t make sense today.” He notes that today’s weaponry “can be loaded and repeatedly fired a lot faster than a musket,” and that the spirit of the Amendment “came from fighting back against a hundred years of a tyrannical government. I think things have changed a bit since then,” he said. Like Ghobadi, he doesn’t see assault weapons as having a place in a modern, civilized society.

BOTH STUDENTS also question why gun ownership is treated with less oversight than getting and keeping a driver’s license, with classes, a database, taxes, renewals and insurance as requirements. “And tests to determine mental health and fitness. These are just basic common sense,” argues Ghobadi.

As for the proposals to arm teachers against attackers, neither thinks that is a reasonable solution, “or even a good idea.” Both think putting more guns in classrooms is “just asking for trouble” and see the move as pushing schools to be “more like prisons than places of learning.”

“Teachers already have so much to do and think about. Adding armed protector to their jobs is not the answer,” said Ghobadi.

What’s next for these two concerned young people? They were encouraged by the support their Walkout efforts had among their fellow students. “We weren’t sure anyone would join us,” said Ghobadi, but when, by their estimations, about 25 percent of the school population took to the athletic fields for the action, “we felt really good, proud of our generation,” added Goodson, who plans to join the national March For Our Lives protest in D.C., one of hundreds of protests scheduled worldwide to take place on March 24. Ghobadi will be out of town next weekend, but hopes to join up with a local march near her destination. Writing letters, continuing to speak out, and supporting voter registration among their peers is also on their agenda.

“I hope we can help things change,” said Ghobadi. “Since Parkland, now when I head out in the morning, I make sure to say ‘Mom, I’m going to school. I love you.’ Nowadays, you just never know what might happen.”