“Game On,” announced through social media. 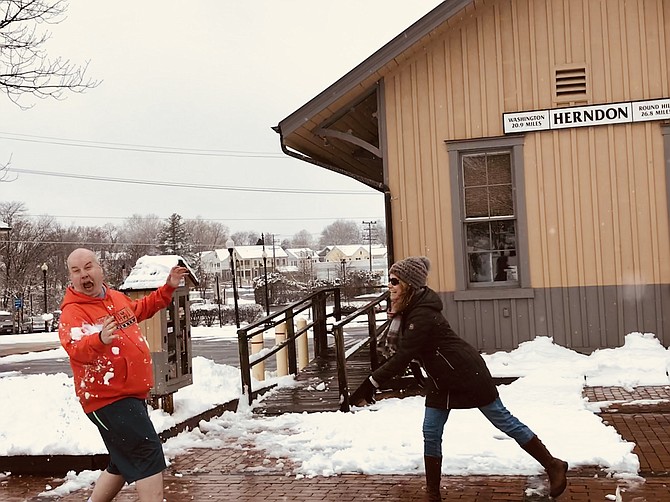 Children and parents took up the challenge of a snowball fight on the Herndon Town Square. A spring nor'easter dumped a record-breaking 4.5 inches of snow, canceling school and making for a great family fun activity. Beth Meyer of Green Lizard Cycling was the friendly instigator for the community snowball fight held Wednesday, March 21. 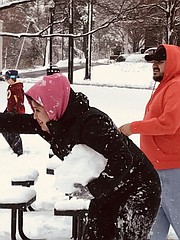 Jenna Kuhn of Sully's Pour House in downtown Herndon prepares to deliver a massive snowball crunch to her opponent during the friendly snowball fight held on the Town Square. Her husband, Basil Kuhn, gives Jenna words of encouragement.

On the first day of spring 2018, a nor'easter finally brought much-wanted snow to the region and the Town of Herndon. The local winter season had been a bust for snow lovers compared to other years. Wintry blasts were so insignificant; the flakes could be broomed away.

However, Mother Nature had one more trick up her sleeve. A great “packing snow” fell late Tuesday, March 20 through Wednesday, March 21, closing schools and setting a record of 4.8 inches at Dulles Airport as reported by the National Weather Service. While the heavy snow blanketed the town, one local merchant could not resist the call for “Game On.”

Beth Meyer of the "Lizard" lit up social media challenging other downtown business owners and staff, as well as local families to join in for a friendly snowball fight on the Town Green, Wednesday, March 21 at 3 p.m.

Merchants, their employees and town residents took the call to heart arriving shortly before the start of the game, ready for the snowball showdown.

Gloved and ready for fun, “Games On” began in downtown Herndon.