28th annual vigil pushed from the statehouse in Richmond to the NRA in Fairfax. 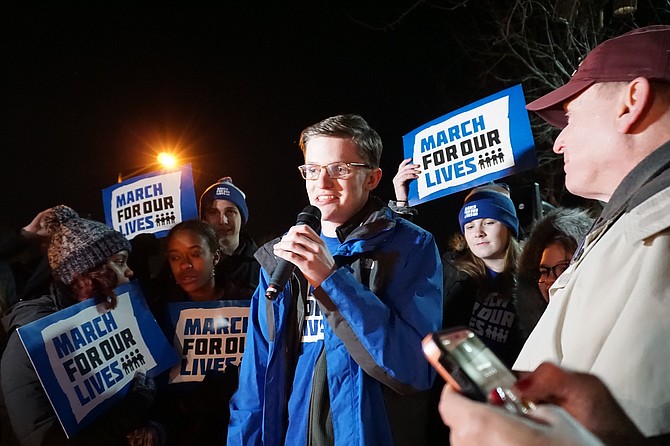 Robinson High School senior Michael McCabe, 17, tells fellow activists gathered Jan. 20 at a candlelight vigil in front of the National Rifle Association in Fairfax about the sense of urgency he and his peers feel about gun violence. Photo by Karen Higa/The Connection 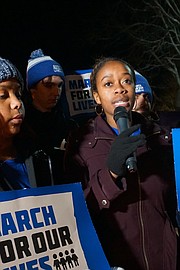 Howard University freshman Mariah Cooley endures below-freezing temperatures and speaks to more than 100 participants about the need to end gun violence Jan. 20 at a candlelight vigil in front of the National Rifle Association in Fairfax at 11250 Waples Mill Road.

Community activists of the Herndon-Reston Indivisible spell things out to motorists passing by the National Rifle Association at 11250 Waples Mill Road Jan. 20 at a vigil that was pushed out of Richmond by gun rights proponents Monday afternoon up to Fairfax for a candlelight remembrance of the more than 1,000 Virginians killed each year by bullets.

More than a hundred people gathered in front of the National Rifle Association in Fairfax Monday evening, Jan. 20, to remember victims of gun violence at a candlelight vigil held after an annual gathering scheduled that afternoon at the state capitol in Richmond was canceled by organizers due to safety concerns law enforcement deemed credible.

Led by Martina Leinz, president of the Northern Virginia chapter of Brady, the vigil featured guest speakers — including 13 student gun violence prevention activists, who camped out overnight at the Pocahontas Building in Richmond inside the offices of Del. Daniel I. “Dan” Helmer (D-40) of both Fairfax and Prince William counties and Del. Chris L. Hurst (D-12) of Blacksburg.

Hurst is a former television news anchor whose girlfriend was killed in a workplace shooting Aug. 26, 2015. The gunman was a disturbed former colleague who murdered news reporter Alison Parker and her cameraman, Adam Ward, during a live broadcast on location near Smith Mountain Lake.

Speakers included Peter Read, the father of college student Mary Karen Read. She was one of 32 people killed in a mass shooting April 16, 2007 at the Virginia Polytechnic Institute. She was a graduate of Annandale High School, according to her memorial page at weremember.vt.edu.

He said the forces of hope are winning over the forces of fear. Read also quoted the Rev. Dr. Martin Luther King Jr. and 1800s American Transcendentalist movement minister and abolitionist Theodore Parker: “Let us realize the arc of the moral universe is long, but it bends toward justice.”

OTHER SPEAKERS included Mariah Cooley, 18, a college freshman, who helped form a chapter of March For Our Lives in October at Howard University in Washington, D.C. She explained how gun violence disproportionately affects Americans in black communities.

“We are 25 times more likely to be shot by police,” Cooley says on a cold Monday evening. She and her fellow students say their chapter has about 50 members who help with voter registration drives and plan to participate in education outreach opportunities at neighboring high schools.

Leinz said about 30 gun violence prevention activists, including Northern Virginia lawmakers, did continue their 28-year tradition in small part and met on the steps of the state capitol Monday afternoon to pay their respects to the more than 1,000 Virginians who die each year from gun violence.

Their mass vigil was canceled to avoid a potential clash of hundreds of GVP activists — who have gathered each year in Richmond at the Bell Tower and statehouse — with the thousands of gun rights advocates, who showed up en masse Jan. 20 with their weapons.

Candlelight vigil speakers agreed forfeiting their annual MLK Day of service tradition was the right thing to do because no violence occurred that day at the state capitol.

Michael McCabe, 17, a senior at the James W. Robinson Secondary School in Fairfax and Virginia Political Director of March For Our Lives, told participants about the sense of urgency he and his peers feel about gun violence.

HIS EXPERIENCE IN RICHMOND Jan. 20 was intense, he describes in an email Jan. 21:

“The gun lobby's vocal, extremist minority was out in force, both inside and outside. The streets around us were flooded with AR-15s and AK-47s, and chants shook the building.

“In the morning, in particular, many opposition members came inside to lobby. Most of them only gave us furtive glances, but as they filled up the hallways and offices, we were physically confronted and accosted by a number of them — the people of color and women in our group were their choice target.

“When they tried to escalate and make things physical — standing uncomfortably close to us, pushing us, laying their hands on our shoulders — we ignored them and continued on with our business. When there was particular concern, we would all silently congregate around the individual being targeted, and put our bodies between them and the individual confronting them.

“Eventually, as the VCDL,” as in Virginia Citizens Defense League, “rally started and as legislators went across the street for caucuses and floor proceedings, the building emptied out, and there was no sound but the screaming outside.

“It was eerie, and a little bit terrifying,” McCabe recalls.

“We went to Richmond yesterday to reassert the democratic will of a vast majority of Virginians, and to act as a moral counterweight to the hate, divisiveness, and extremism in the streets below us,” he explains.

“Our goal was to stay safe and to make our presence felt, and we succeeded.” McCabe said his group made tremendous progress in the advancement of their 2020 Virginia legislative agenda and met with 15 lawmakers to solve problems with bill language and strengthen legislation supported by March For Our Lives.

“We also saw an outpouring of solidarity from all around the country. The hashtag we created, #IStandWithVirginia, trended #1 in the United States on Sunday and Monday, and was used by over 150,000 people to show their support, including presidential candidates Elizabeth Warren and Joe Biden,” McCabe pointed out.

As far as gun violence is concerned, McCabe maintains: “We’re not going to hand this to the next generation,” he declares at the MLK vigil in Fairfax. “We’re going to end it.”

This teenager can add experience as public speaker to his resume: For at least two years, McCabe has spoken at school board and town hall meetings plus social justice rallies. He is the Virginia Political Director of March For Our Lives.