Coming Together for Children with Cancer
Votes

Coming Together for Children with Cancer 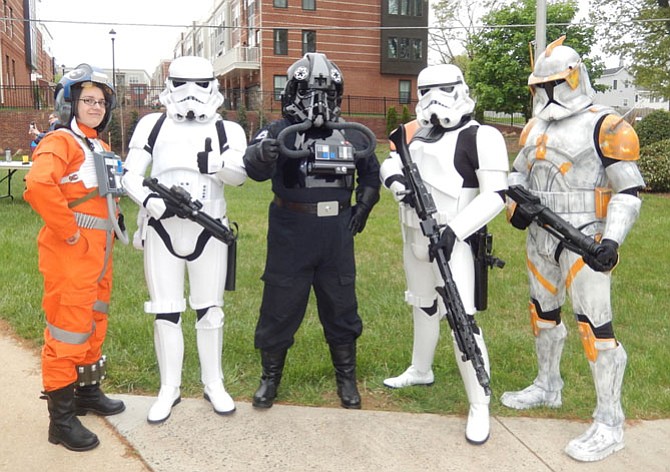 Members of 501 Legion portray Star Wars characters (from left) an X-Wing pilot with the Rebel Legion, a stormtrooper, tie pilot, another stormtrooper and Commander Cody. Photo by Bonnie Hobbs. 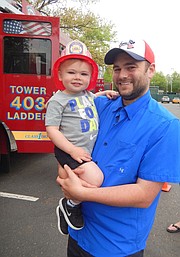 Nate Solberg and son Hudson, 2, visited the firefighters from Station 3. 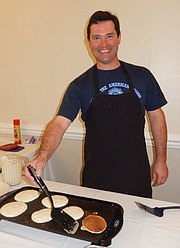 Jim Price, with the Sons of the American Legion, flips pancakes.

Ella Di Paolo is just 2, but she’s already a cancer survivor. And she and her family were among the honored guests at last Saturday’s third annual Ellie’s Hats Pancake Breakfast. Held May 5, at American Legion Post 177 in Fairfax, it raised nearly $16,000 for children with cancer and their families.

Some 175 people attended, and a breakfast buffet, children’s activities and the generosity of the local community joined forces to make the event a big success. The fun included a raffle and a silent auction for the adults, plus a fire engine, a police vehicle, Star Wars characters and a princess for the children.

FOUNDED BY TEACHER Jay Coakley, the nonprofit Ellie’s Hats raises awareness of the disease while raising money to purchase hats for pediatric cancer patients who’ve lost their hair due to chemotherapy. It also donates gas cards, gift certificates and money to their families.

Ella was diagnosed with a brain tumor at 5 months and started chemo, two months later. She just finished it, Feb. 23, after 18 months of treatments. And, said her mom, Tammy Di Paolo, “She’s doing well, for the most part.”

Di Paolo has two other children, son Cameron, 15, and daughter Madelyn, 7. “It’s our second time at this pancake breakfast,” she said. “The kids love it, and it’s always a fun event to come to. Ellie’s Hats was one of the first organizations to contact us when Ella was first diagnosed. They sent us a box of hats, gift cards and presents – and not just for Ella, but also for Cameron and Madelyn.”

“I really appreciated how they thought of the other kids, too,” continued Di Paolo. “We were having a horrible day at the time, and it made our day. It touched us that strangers reached out and thought of us. So we make donations to Ellie’s Hats and come to the breakfast. We try to give back to the ones who helped us, cheering us up at a difficult time.”

Brigid Bludau was also there with her three children, David, 4-1/2; Audrey, 2-1/2 and John, 5 months. And they were enjoying juice, plus plates heaped with chocolate-chip pancakes, eggs, bacon, sausage, hash browns, fruit and ham. “We’re supporting one of the volunteers who works with Ellie’s Hats,” explained Bludau. “David goes to school with her daughter.”

Meanwhile, at a nearby table, Dave Jacobs was enjoying breakfast with his daughter Sadie, 12, and son Travis, 11. Sadie especially liked her chocolate-chip pancakes with whipped cream, blueberry pancakes, bacon and strawberries. She was also happy to see friends there that she hadn’t seen in a while. Travis gobbled up pancakes, ham and hash browns and said he liked the ham and the Star Wars characters the best.

Jacobs is with Mystek Systems, one of the event’s corporate sponsors. “We believe in the mission of Ellie’s Hats,” he said. “For a long time, we’ve supported children with blood diseases and cancer – folks who really haven’t gotten a good break. This breakfast is important because it brings people together from across the community. Jay is an old friend of our company and was the gymnastics coach of our founder’s wife when she was in high school. But more than anything, we support Ellie’s Hats because it helps the kids.”

The Sons of the American Legion contributed their time and efforts to prepare the meal. And during Saturday’s event, Ellie’s Hats board member Brian Drummond told those attending, “The American Legion donated this room, which is normally rented out for thousands of dollars. And their volunteers have been here since 6 a.m. working.”

Drummond also noted that this coming Saturday, May 12, the GMU Alumni Assn. will hold its 50th anniversary gala. “They’re honoring what their organization’s spirit entails,” he said. “And Jay is one of 50 people who’ll be honored.”

Busy flipping a new batch of pancakes, Jim Price of the Sons of the American Legion said he was happy to participate “for Ellie’s Hats and the whole story behind it and to help out kids with cancer. Helping others is what we do as the American Legion.”

Also there was John Rathnam, a Woodson High Class of 1981 graduate, who came with some classmates. “Jay also graduated from Woodson, and his sister was in my class,” he said. “I’m here to support him and the cause; they do so much for kids with cancer. And it’s just amazing how Ellie’s Hats has taken on a life of its own.”

In addition, Gwen Wotring – who makes hats and donates them to the organization – had a table there, where she sold her hats to the attendees. Pleased, she said, “A lot of people bought them today to donate to Ellie’s Hats.”

THANKING EVERYONE for coming to the event, Coakley said, “The main thing that makes this happen is you guys. And this year, the families of kids battling cancer got their breakfasts free – and, to me, that’s the coolest part about this breakfast. We wanted to sponsor 10 families at $35 each, and 25 people volunteered to do it.” He also expressed his appreciation to Allstate, which donated $9,500 to the organization.

Afterward, he said, “I think it was another successful event. And the weather cooperated, so we were able to have the fire and police vehicles and Star Wars characters outside. It’s a great, family event for people to get together and just have fun. More kids that we’ve helped came to this breakfast than in previous years, and it was wonderful to meet them, face-to-face.”