‘It Made Us Feel Really Loved and Seen’
Votes

‘It Made Us Feel Really Loved and Seen’ 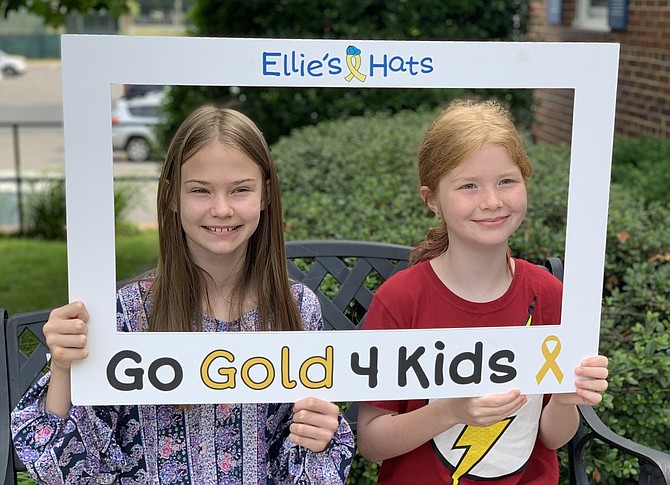 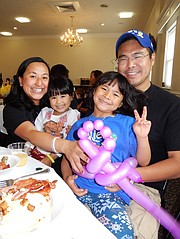 Rachel and Daniel Smith with daughters (from left) Dani, 3, and Lucia, 5½.

Don and Sherry Presar of Fairfax came to the breakfast in honor of their grandson. 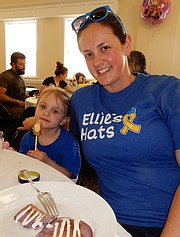 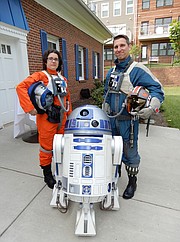 Paul Dooley, 5, got this black-spider balloon at the breakfast.

Ellie Whitfield was diagnosed with acute lymphoblastic leukemia in 2013; and by the time she started kindergarten, she’d lost her hair and was wearing hats to school every day. Her P.E. teacher, Jay Coakley, noticed how happy her hats made her and organized a hat drive for her.

He also wanted to bring that same joy to other children suffering from cancer, while raising awareness of the disease, so he founded the nonprofit Ellie’s Hats. It now also donates gas cards, gift certificates and money to their families to help them through difficult and expensive times.

A pancake breakfast helps fund all these things, and the fourth annual Ellie’s Hats Pancake Breakfast was held Saturday, June 1, at American Legion Post 177 in the City of Fairfax. More than 100 people attended and enjoyed a breakfast buffet, children’s activities, a raffle, silent auction, Star Wars characters and Disney princesses.

ELLIE, now a healthy fifth-grader, was at the breakfast, as were other children who are either cancer survivors like her or are still undergoing treatment. And for those few hours, they got to be just regular kids, eating pancakes, playing and having fun.

One of them was 4-year-old Lily Stewart. “We met Jay through her diagnosis of Wilms – kidney cancer – in 2017, so we’re very supportive of him and of Ellie’s Hats, since we benefited from them,” said Lily’s mom, Christina Stewart. “At the hospital, when she had her kidney removed, she picked out a hat. And when she was first diagnosed, she got an Ellie’s Hats care package with a shirt and gift cards.

“It was just like, you don’t feel alone,” explained Stewart. “You have your personal support system, but it’s nice to know these organizations are out there to provide pick-me-ups. Lily is now 15 months with no evidence of disease and is doing fine. She loves going to preschool and to the pool, coloring and drawing.”

Fairfax’s Jeannie Buhr was there with daughter Ava, 10. “We’ve been coming to the Ellie’s Hats Pancake Breakfast for four years now,” said Buhr. “We know Jay through Ellie, herself. Ellie was going through treatment the same time Ava was for acute lymphoblastic leukemia.”

Ava is now five years cancer free and is considered cured. “We’d see Ellie in the clinic and, besides the girls becoming friends, we also became friends with Ellie’s mom and dad,” said Buhr. “So we’re here today to support Ellie’s Hats; it’s a wonderful organization and a wonderful mission.”

Don and Sherry Presar, also of Fairfax, enjoyed the pancakes, hash browns, ham, sausage and coffee. “We’ve been here every year,” said Don. “Our grandson in Connecticut, Jack, is now 21; but when he was 15, he was diagnosed with Ewing’s sarcoma [bone cancer].”

“Jay sent him hats, and we’ve been supporters ever since,” said Sherry.

“Jack was treated at Sloan-Kettering [in New York], and we’re grateful to all the doctors there,” said Don. “We just pray for the researchers every day. New things are happening all the time, so our family motto is, ‘We don’t ever give up.”

Melissa Akers was there with her twin boys, Tyler and Dylan, 4½. Dylan is currently in treatment for acute lymphoblastic leukemia. “He was diagnosed in January 2017 at 25 months old, but he’s doing really well,” said Akers. “He’s in remission and has one year left in treatment. Because Tyler is an identical twin, he has a higher risk of developing it, so he has regular blood tests to monitor him – and lots of prayers.”

Akers used to work with Kristen Dallhoff, on the Ellie’s Hats Board of Directors, so she was familiar with the organization. “When we let our friends and families know about Dylan’s diagnosis through Facebook, Kristen saw it and contacted us,” she said.

Then, said Akers, “Jay visited us in the hospital, our first week, and brought hats, toys for both boys and gas gift cards – which were very helpful because we live about an hour from the hospital. It was one of our first connections with a group that helps children with cancer, so it made us feel really loved and seen.”

Also at the breakfast were Rachel and Daniel Smith with daughters, Lucia, 5½, and Dani, 3. They came to support Ellie’s Hats because of how the organization supported them last year, after Lucia was diagnosed, Jan. 1, 2018, with acute promyelocytic leukemia.

“It’s a subset of AML [acute myeloid leukemia], but very rare in children,” explained Daniel. “There are some 2,500 cases a year in adults, but only about 50 a year in children. Lucia had fevers and bruising on her legs, so a friend who’s a doctor told us to take her for a blood test. We did, and our pediatrician said to take her to the Inova Fairfax Children’s Hospital ER, and she was diagnosed there.

“We were terrified, surprised and scared – and kind of in shock,” he continued. “She’d never been sick; it came out of nowhere. Lucia was in treatment until October 2018, when she went into remission. She had daily chemo, every other month, so it was pretty intense. But she was in good spirits because she was so young, so it became normal for her. She became friends with the nurses and played games with them.”

And although Lucia still has to undergo quarterly, bone-marrow biopsies and monthly blood tests, she can enjoy her life more now. She likes to swim and play tennis and is taking tae kwon do and learning how to cook. But Ellie’s Hats still means a great deal to her parents.

“When we were in the hospital, we got some of Ellie’s Hats there,” said Daniel. “And later on, we got information about it and they sent a care package to us with hats and toys for the kids. Then we found out about their fundraising car show at Casey’s Automotive in Chantilly and went to it last year and this year. And this is our second time at the pancake breakfast.”

“It was great,” added Rachel. “We brought some friends with us. We love the breakfast and raffles, and the kids love the balloons, Star Wars characters and Anna and Elsa [from the movie, ‘Frozen’]. And, one time, Jay was telling the FCPS School Board about Ellie’s Hats, and both Ellie and Lucia were there with him to help represent Ellie’s Hats and childhood cancer.”

“It’s amazing having this organization and seeing all the families come together in support of us and families like us,” said Daniel. “It’s nice to know you’re not alone. And in November 2018, we were one of the first groups of families to receive a check from Ellie’s Hats from its corporate sponsors. We were surprised, but it meant a lot. We used it for medical expenses.”

DURING THE BREAKFAST, children were able to make silkscreened chalkboards and clay-hat ornaments in an arts-and-crafts room, as well as have their faces painted and get fanciful balloon animals like the huge, black spider sported by Paul Dooley, 5. His dad, Paul Dooley Sr., is one of Coakley’s former students and a member of the Widows Sons Masonic Riders Assn.

“We gave Jay a check for $600 that we raised last week at a charity breakfast before Rolling Thunder,” said Dooley. “So we came to the pancake breakfast to support Ellie’s Hats and present the check. And the Haymarket Charitable Foundation of the Haymarket Masonic Lodge also donated $2,000, so we gave him two checks.”

“Ellie’s Hats is fantastic because it supports kids,” he continued. “Having a child with cancer is horrible – no kid deserves that. And if this organization can bring a smile to a kid’s face just by bringing them a hat, then it’s just a great thing.”

Dooley’s wife Maggie also stressed that “The National Cancer Institute designates only 4 percent of its funding to childhood-cancer research. So Ellie’s Hats is another way to help raise awareness – because we need more than four.”

During the breakfast, Ellie’s Hats board member Brian Drummond thanked American Legion Post 177 for donating its hall for the event and its members for arriving before 6:30 a.m. to prepare the food. And to the crowd, he said, “Thanks for being here; it’s a great cause.”

Coakley also praised the volunteers from Allstate and Volunteer Fairfax who helped make the event a success, and even the balloon-animal maker, who donated his time. It raised $14,000, including a $10,000 donation from Allstate.

“It was fun; and this year, we had more things for the kids to do, plus lots of kids’ prizes in the raffle items,” he said. “The weather was perfect, the food was delicious and everything went well.”