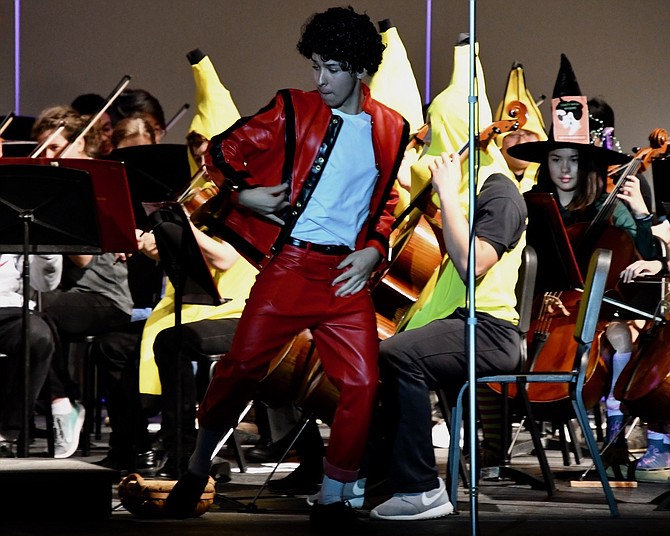 Pedro Petcov Neto, a junior in the Symphonic Orchestra, put aside his violin to thrill the audience with iconic Michael Jackson dance moves. Photo by Helen Beckner

On the eve of All Hallow’s Eve, Langley High School’s orchestra gathered for Spookfest IV. Gone were the orchestra’s typical emerald gowned and tuxedo wearing teenagers. In their place was a sea of ghouls, goblins, grim reapers, onesies and a bunch of crazy bananas, all eager to thrill a full house.

The concert began with the Concert Orchestra’s eerie rendition of Andrew Lloyd Webber’s “Phantom of the Opera,” with a special sighting of the phantom (Dr. Scott McCormick, the orchestra’s director) himself. Channeling their inner Tim Burton, the Concert Orchestra continued with “This is Halloween” from the movie “The Nightmare Before Christmas,” and finished with “Ghost Carnival.”

IN A LANGLEY’S FIRST, a 28-person cello choir filled the stage. With some dressed as witches and others as warlocks, they performed Eduard Greig’s iconic “In the Hall of the Mountain King.” Originally background music for a play, the piece increased in intensity and speed, displaying the breadth of talent of the orchestra’s cellists, who worked on the music in separate rehearsals outside of normal class time.

Next, the Philharmonic Orchestra, joined by several band members, stunned the audience with Camille Saint-Saëns’ “Danse Macabre,” literally speaking the Dance of Death. Legend has it, on Halloween, the Devil calls forth the dead by playing on his fiddle. Madeline Yu, the violin soloist and honorary devil, played on a purposely mistuned violin.

One dance of death wasn’t enough, as the Philharmonic Orchestra continued with Franz Liszt’s “Totentanz,” accompanied by a trio of pianists: seniors Alex Tran and Lauren Cain, and junior Cao Linh Pham (a junior cellist), who dressed up a as up as an angel, vampire, and grim reaper respectively. The three had been working in partnership for two months, operating as a “tag team” as Cao Linh Pham put it. Literally a tag team, the pianists would pounce on each other, as they transitioned between their roles.

Wrapping up the concert was the Symphonic Orchestra, led by the new assistant director Adam Willett. Disguised as Mario from the Nintendo video game of the same name, Willett was excited for the first concert. “Even though I’ve worked in other high schools this is the best group I’ve worked with," he said.

However, as the orchestra ascended the stage, it was clear that nearly half of the students were missing. It was then that Caitlin Gerrard, a senior cellist dressed as a spoof of the book “Crazy Rich Asians,” shouted “Where is everyone?”

Her question was met with a cheer of applause, as the missing orchestra students stampeded through the auditorium, all dressed up as neon yellow bananas. A moment several weeks in the making, George Janke, a senior cellist in Symphonic Orchestra, and Riker Wilson, a sophomore cellist also in Symphonic, came up with the idea on a whim and persuaded “a few” of their friends to join them.

The grand banana entrance was followed by “Psycho” from Alfred Hitchcock’s movie of the same name, and a Spookfest favorite, Richard Meyer’s “Incantations.”

Mihika Khubchandani, a sophomore violinist in the Concert Orchestra, commented that she was “really excited to hear and see the Symphonic Orchestra’s “Thriller.”

Michelle Ascrizzi, a senior violist in the Philharmonic Orchestra, reminisced about her eight years in orchestra nostalgically. “One of the first orchestra concerts I remember going to [at Langley]…was a Halloween one, and I remember wanting to do one, and now we are and it’s perfect!”