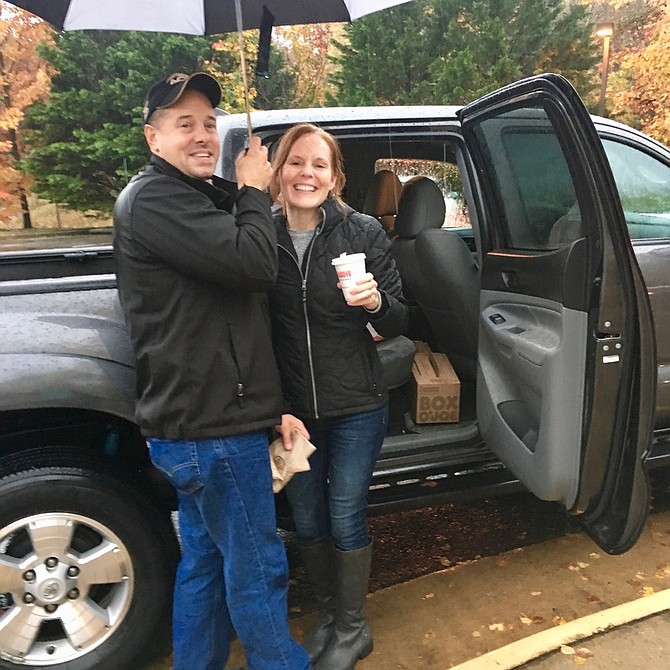 Arlington poll greeters who had travelled to Occoquan to help out were impressed by the kindness of Michael and Sarah Mishler, who drove to each polling station handing out free, hot coffee and donut holes. Photo by Eden Brown. 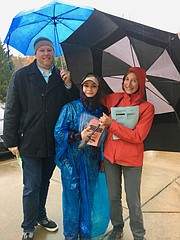 From left: Ben Hazekamp, Rebekah Perkins, and Sharon Shutler, of Arlington, handed out sample ballots in the rain at the Ebenezer Baptist Church. Arlingtonians travelled out of their county to help polling stations all over Northern Virginia. 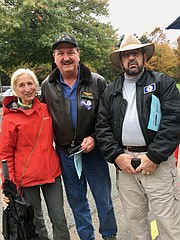 One of the busiest polling stations was at the James J. McCoart Administration Building in Occoquan, where Hank Foresman of Woodbridge, Col. USMC (Retired) Monte Dunard of Woodbridge, and Sharon Shutler of Arlington handed out sample ballots to voters. Shutler did a third shift at the McCoart Building because of high voting numbers.

There was a different feel at polling stations across Northern Virginia last week on Tuesday. There was more enthusiasm, more volunteerism, more engagement in the nuts and bolts of voting, and more Arlingtonians, who drove as far as an hour away to make sure polls were covered, despite cold, rainy weather. As elderly voters got out of their cars in the rain, younger poll greeters went over to offer an umbrella as they walked to the polling station.

Sharon Shutler drove down from Arlington help in Vangie WIlliams’ district, Jesse Clark of Vienna went out to Dulles to hand out ballots, Michael and Sarah Mishler of Lake Ridge showed up at Occoquan Ebenezer Baptist Church polling station with hot coffee and donut holes. They might have been Republicans, they might have been Democrats. It didn’t matter. They were in the spirit that pervaded polling stations: civility.

Rebekah Perkins drove up to Occoquan from Gainesville to hand out flyers about the Independent candidate running for school board. She felt strongly about her candidate, Alyson Satterwhite, because she had a special needs child and saw in Satterwhite a candidate who understood her situation.

Ben Hazekamp, who moved to the area from Michigan some years ago, is now chairman of the Young Republicans in Prince WIlliam County. He talked with Arlington poll greeter Sharon Shutler about why he joined the GOP and how he sees the issues from both sides. Hazekamp handed out sample ballots for Perkins after she left to go home to take care of her son. He told Shutler that he believes talking about each other’s views on issues is important: there is no point in being combative when there are so many problems to solve.